Handling of classified info 'not up to standards,' White House admits 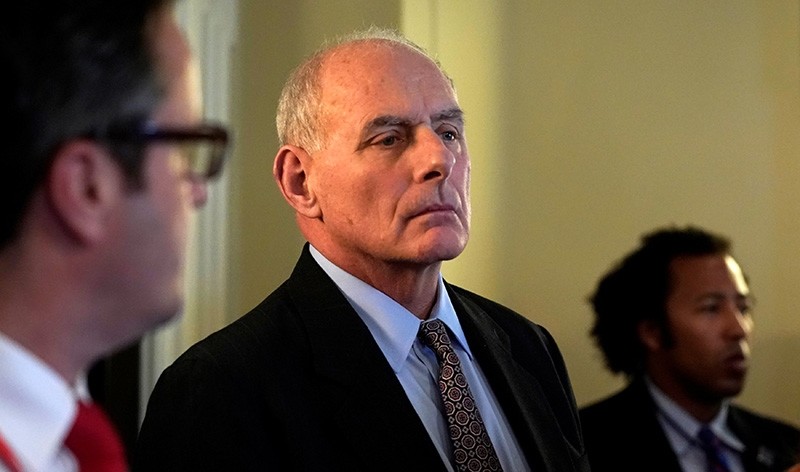 White House Chief of Staff John Kelly on Friday admitted the Trump administration's early handling of classified information and gatekeeping of sensitive secrets was not up to snuff.

Kelly told journalists that he had his "eyes opened" after joining the White House in July last year, by the way people were treating documents and the number of staff who had access to secrets.

Painting a picture of a neophyte staff of outsiders, unfamiliar with Washington and learning how to run the world's preeminent superpower, Kelly said he moved to bring habits in line with the Pentagon and military, where he served for decades.

"In terms of the handling of classified material," he said the White House "wasn't up to the standards that I'd been used to."

"Nothing illegal," he added. "But it wasn't quite up to the standards."

"Most of the people here in the White House had never worked in government before," he explained.

On Donald Trump's path to the White House he repeatedly pilloried his Democratic rival, Hillary Clinton, for storing government emails on a private server, suggesting that was a national security risk.

Kelly also admitted that his initial concerns sparked a further crackdown, when he noticed that around 35-40 White House staffers had top secret clearance and did not need it.

That top level of clearance is often used in the Situation Room and for the nation's most closely guarded secrets.

Kelly also noticed that many staff did not have final clearance and were working as FBI background checks were ongoing.

"I'm having my eyes opened here," he said.

"Of the people who are here, what is the percentage that are still on interim clearances?" he asked, "and the answer to that was a fair number. It was a lot."

"A couple of spreadsheets worth of people," he added. "More people than I was comfortable with."

The issue of clearances would ultimately engulf the White House, leading to -- according to other sources -- Jared Kushner having his clearance downgraded.

That downgrade raised questions about what may be holding up his background check and whether he can continue to lead Trump's efforts to negotiate Middle East peace with only "secret" not "top secret" clearance.

Kelly also admitted that the White House's handling of staff-secretary Rob Porter's departure amid allegations of domestic abuse was not ideal.

"We didn't cover ourselves in glory in how we handled that."