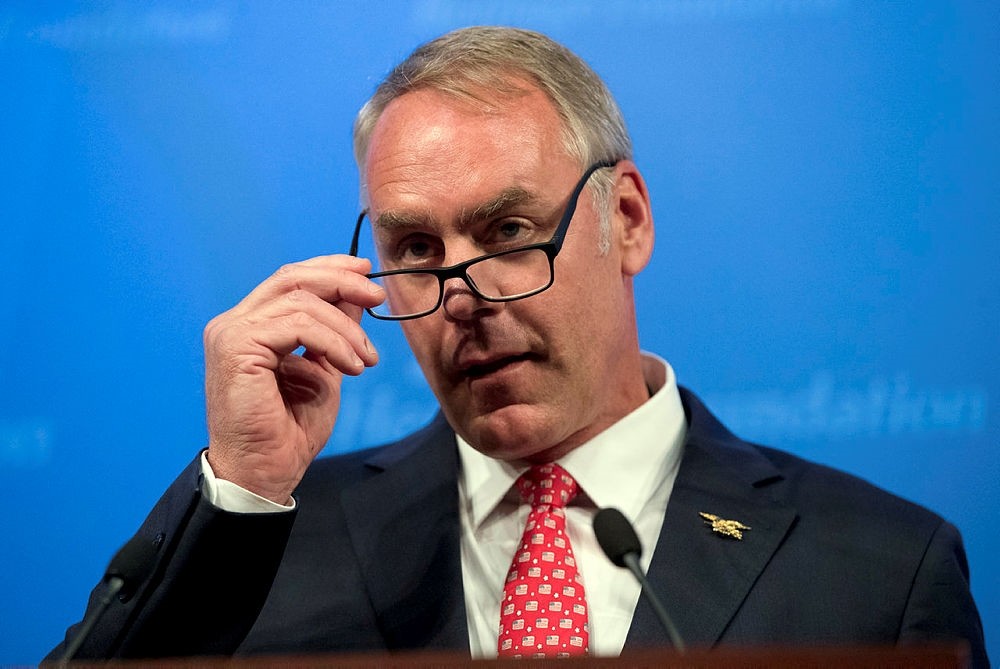 In this Sept. 29, 2017 file photo Interior Secretary Ryan Zinke speaks on the Trump Administration's energy policy at the Heritage Foundation in Washington. (AP Photo)
by Associated Press Mar 09, 2018 12:00 am

The Interior Department is spending nearly $139,000 to upgrade three sets of double doors in the office of Secretary Ryan Zinke.

Zinke was not aware of the contract for the work prior to a request about it from The Associated Press, spokeswoman Heather Swift said. The project was planned by career facilities and security officials as part of the decade-long modernization of the historic building erected in 1936 a few blocks from the White House, she said.

"The secretary was not aware of this contract but agrees that this is a lot of money for demo, install, materials and labor," Swift said Thursday in an emailed statement. "Between regulations that require historic preservation and outdated government procurement rules, the costs for everything from pencils to printing to doors is astronomical. This is a perfect example of why the secretary believes we need to reform procurement processes."

The current door from a hallway to the secretary's sixth-floor office does not lock, so a security upgrade is needed, Swift said.

An order for the $138,670 job at the Interior Department was listed on an online government procurement database as being completed in November, amended with the note "Secretary's Door" to explain what the payment was for.

Swift said the dates on the online invoice are incorrect and that the doors have not yet been fixed. Design work on the project was approved last month and installation is expected this summer.

Records show the Maryland contractor hired to do the work, Conquest Solutions LLC, has done several renovation projects at federal buildings. A man who answered the phone at the company Thursday hung up when a reporter asked about Zinke's office.

An Interior Department official familiar with the project said the work involves three sets of double doors in the secretary's office, including two doors that open onto a corner balcony with a spectacular view of the Washington Monument and the National Mall. A third opens to a hallway that features painted portraits of previous Interior secretaries.

The official asked not to be identified because he was not authorized to speak publicly about the project, which has been planned for nearly two years. Zinke took office in March 2017.

The current balcony doors leak "like a sieve" whenever it rains, forcing workers to mop the wooden floor in Zinke's office, the Interior official said.

The new balcony doors will be made of fiberglass specially made by Conquest Solutions and include glass transoms above the doors and fiberglass door frames, the official said.

Zinke is among several Trump Cabinet officials recently under scrutiny for their spending. He spent $53,000 on three helicopter trips last year, including one that allowed him to go on a horseback ride with Vice President Mike Pence.

"This opens the door to more troubling questions about how Zinke is wasting taxpayer money," said Shripal Shah, a spokesperson for the Democratic group American Bridge, which first noted the contract. "The secretary must believe he was handed a blank check the day he was confirmed, but the American public won't tolerate his reckless spending habits."

Health and Human Services Secretary Tom Price was forced to resign in September following media reports he spent at least $400,000 in taxpayer funds on private jets for himself and his staff.

Environmental Protection Agency Administrator Scott Pruitt recently said he may start flying in coach amid skepticism of his prior claims that he needed to fly first class because of security concerns. Pruitt also spent $25,000 on a soundproof "privacy booth" inside his office to prevent eavesdropping on his phone calls. Another $9,000 was spent for biometric locks and to have Pruitt's office swept for hidden listening devices.

Housing and Urban Development Secretary Ben Carson came under fire last month after reports his agency was spending $31,000 for a new dining set.

Reports of the purchase, which HUD officials said was made without Carson's knowledge, came on the heels of allegations by a HUD employee that she was demoted after she refused to bankroll a costly remodeling of Carson's office, which she said came at Carson's wife's request.

After media reports highlighted the spending, HUD canceled the order for the new furniture.

The door project is not the first time work on the Interior secretary's office has come under scrutiny. A 2007 renovation of the secretary's personal bathroom cost $222,000, a figure that included a sub-zero refrigerator and custom cabinetry.