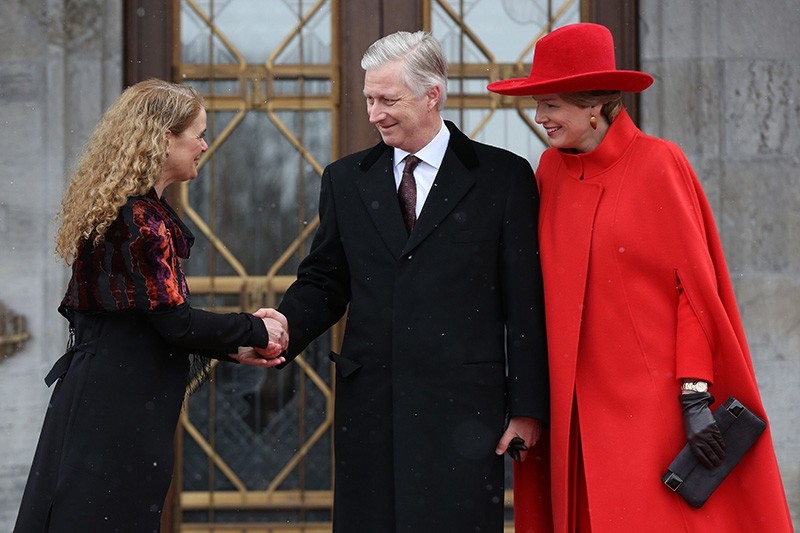 King Philippe and Queen Mathilde of Belgium are welcomed at Rideau Hall by Canadian Governor General Julie Payette in Ottawa, Ontario, on March 12, 2018. (AFP Photo)
by Mar 13, 2018 12:00 am

A German flag accidentally flapped Monday at an official welcome in Canada for Belgium's king and queen.

The flag with horizontal stripes of black, red and yellow was affixed to a tree along with Canada's flag outside the residence of Governor General Julie Payette.

On Belgium's banner the black, yellow and red stripes are vertical.

It was supposed to mark a tree that had been planted on the grounds in 1977 by Queen Fabiola, during the last Belgian royal visit, near where King Philippe and his wife Mathilde would also plant a sapling.

"While we were preparing for the tree planting ceremony on the grounds of Rideau Hall, it was brought to our attention that there was a mixup with a small flag that was used to help identify the tree planted by Her Majesty Queen Fabiola in 1977," Governor General Julie Payette's spokeswoman said.

"We rectified the situation immediately, prior to their majesties' arrival at the tree planting."

King Philippe and Queen Mathilde are on a state visit to Canada until March 17 with stops scheduled in Ottawa, Toronto and Montreal.

They arrived at the governor general's mansion on Monday in an open horse-drawn carriage accompanied by members of the Royal Canadian Mounted Police in dress uniforms of red serge.

Following a cannon salute and an inspection of the guard, King Philippe thanked Canadian soldiers for fighting on behalf of his country's freedom in the two world wars.

"We owe our freedom to these soldiers," he said.

Afterward the royals proceeded to the tree planting.