Tumult engulfing the White House, Trump jokes 'who's next?' 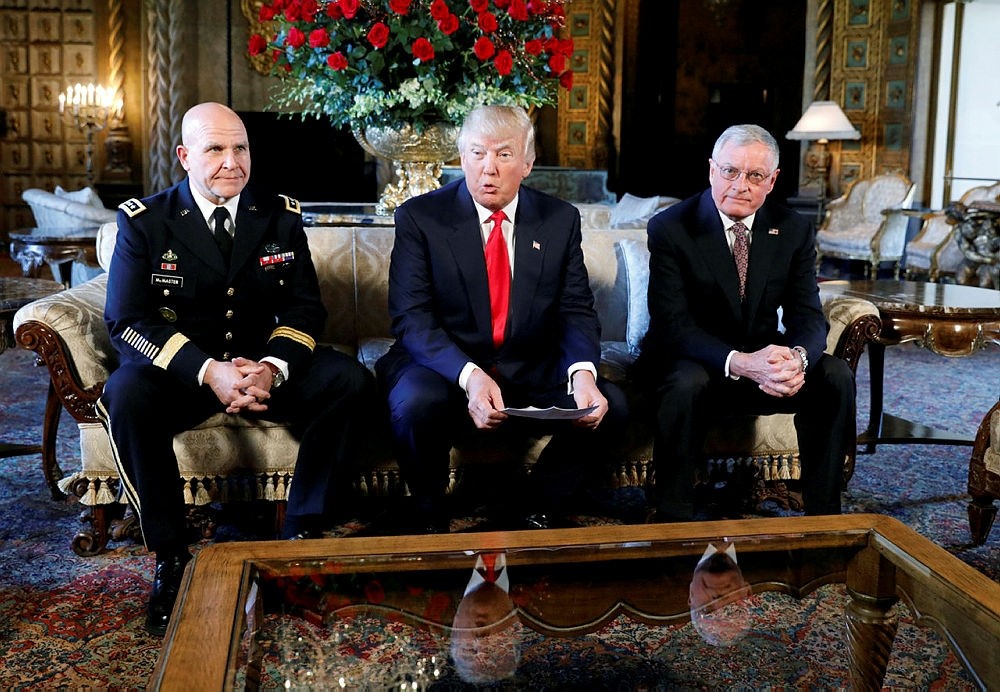 U.S. President Donald Trump consumed Thursday morning's TV headlines with amusement. Reports of tumult in the administration were at a feverish pitch — even on his beloved Fox News — as the president reflected on the latest staff departures during an Oval Office conversation with Vice President Mike Pence and Chief of Staff John Kelly.

It's the very question that has the whole White House on edge.

In recent weeks, the president's top economic adviser has resigned over a policy dispute, the secretary of state he long clashed with was fired and a slew of top aides headed for the exits. An increasingly confident Trump is privately weighing still more changes, expressing frustration with certain advisers and sifting through possible replacements.

Many close to Trump think more upheaval is coming soon. The president is moving toward replacing national security adviser H.R. McMaster, but has not settled on exact timing or a successor, said four people with knowledge of White House deliberations. Kelly has also worn on the president, confidants of the president said. And Veterans Affairs Secretary David Shulkin, under fire for ethics violations, appears to be grasping to keep his job.

So intense was the swirl of speculation about McMaster that White House spokeswoman Sarah Huckabee Sanders tried to tamp things down late Thursday by tweeting: "Just spoke to @POTUS and Gen. H.R. McMaster - contrary to reports they have a good working relationship and there are no changes at the NSC."

Kelly has told confidants that he believes he can weather the current storm and that he does not plan to quit. But he has grown increasingly frustrated with the constant turmoil in the West Wing, believing at times that Trump intentionally fuels the chaos to keep his staff on its toes and his name in media headlines, according to a person familiar with the chief of staff's thinking. The person spoke on condition of anonymity because they weren't authorized to speak publicly about private conversations.

This account of the tensions in the White House is based on conversations with 10 officials inside the White House and familiar with West Wing deliberations, all of whom spoke on condition of anonymity because they were not authorized to discuss internal matters.

After more than 14 months in office, Trump is reshaping his administration, seeking people more likely to fall in line with his policies and tolerate his moods. The factionalism that defined the early days of his tenure has faded and he has lost some of the close aides who could manage his volatile impulses. To some, the White House is increasing taking on the feel of a squad of cheerleaders more than a team of rivals.

While dismissing news reports of looming departures, Trump also appeared to signal more changes to come on Thursday, telling reporters: "There will always be change."

Trump's administration has set records for turnover among senior administration aides. Top economic adviser Gary Cohn and communications director Hope Hicks are leaving the White House in coming weeks. Secretary of State Rex Tillerson was just unceremoniously ousted. And junior-level aides were particularly troubled by the abrupt exit of Trump personal assistant John McEntee this week, who was removed from his job and escorted off White House grounds — then quickly handed a job on Trump's re-election campaign.

In private conversations in recent weeks with aides and friends, Trump has reflected on his desire to reshape the administration. Though the drumbeat of the ongoing Russia probe has only grown louder, the president believes that his recent decisions on tariffs and North Korea have breathed new life into his administration, and he is eager to take more "bold steps" that make his own mark. He has told confidants he wants to rid himself of staffers who hold him back.

Trump chafes at McMaster's demeanor, complaining that his aide lectures him, according to three current and former administration officials. Officials said McMaster has been sidelined in some internal discussions, with Kelly taking on a more active role in foreign policy decisions, because of the personal tensions.

The president and McMaster have disagreed on a number of issues — including the Iran deal and the U.S. approach to North Korea — and the national security adviser has also clashed with Kelly and Defense Secretary James Mattis, according to the officials.

McMaster, in turn, is not a natural fit for the scattershot policy-making process in the White House and dislikes the internal rivalries that so often divide the West Wing. He was the target of online attacks from the fringes of the right wing last summer, including for his alleged insufficient support of Israel.

During an earlier round of Trump discontent with his national security adviser, there was White House talk of providing McMaster, a three-star general, with a soft landing by giving him a fourth star along with a command in a priority area such as Afghanistan or Korea, according to a former senior administration official.

Kelly and Defense Secretary James Mattis both have said they want the national security adviser to have a graceful exit when he departs, ideally a military command — and perhaps a fourth star — overseas. While they have had their disagreements with McMaster, they feel that his record of service demands respect and they want to broadcast that soft landings are possible from the Trump administration.

Kelly has been credited with imposing order on the chaotic West Wing, but his relationship with Trump has come under strain too.

Trump was said to be deeply irritated and to have considered firing Kelly over the negative publicity surrounding his handling of the controversy over ousted White House aide Rob Porter, who was accused of domestic abuse. The president also recently told an ally that he was still frustrated by an interview that Kelly gave to Fox News nearly two months ago in which he suggested that Trump had "evolved" in his thinking about the need for a wall on the Mexican border.

At least one of Trump's "generals" — the collection of military advisers he used to boast about — remains largely in good standing. The president is said to remain pleased with Mattis, as the defense secretary rarely publicly disagrees with Trump and has succeeded in quietly working through any differences, according to three White House officials and outside advisers.

Trump has expressed frustration with aides whom he believes try to "manage" him according to several current and former White House officials — and has grown tired of efforts by his staff to stall controversial actions they disagree with. Trump, the officials said, wants a lively discussion — he often talks about enjoying conflict among his aides — but has grown irritated that some try to undermine his decisions.

As Trump reshapes his administration, those who are taking over some of the vacated administration jobs tend to have closer ties to the president and signal more willingness to buy into his ways.

Trump's nominee to be the next secretary of state —CIA director Mike Pompeo — is a longtime favorite of the president who has demonstrated rare ability to navigate the West Wing. A campaign supporter of Trump's, Pompeo developed a strong personal relationship with the president by regularly attending his daily intelligence briefing.

And Trump has known his pick to replace Cohn for decades. He's CNBC contributor Larry Kudlow, who opposes taxing foreign imports, yet still says he's "in accord" with Trump's agenda.