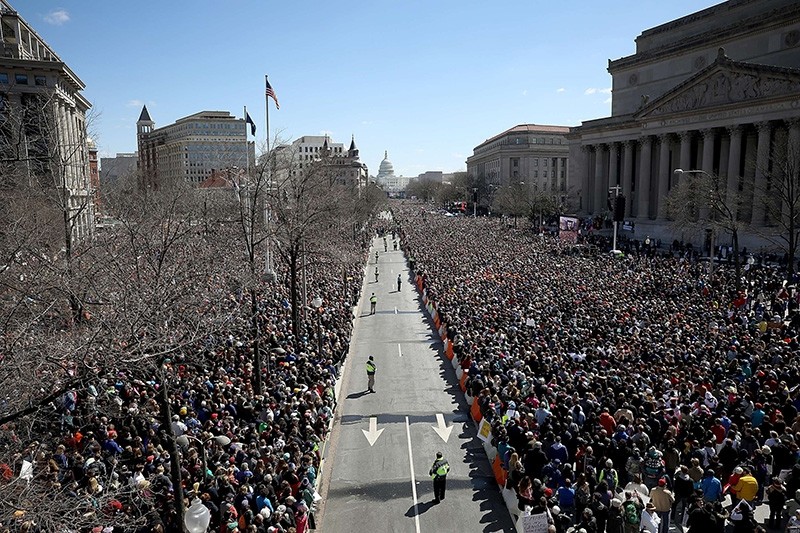 A series of protests held across the United States Saturday in support of gun control is shaping up to be one of the biggest youth protests since the era of the Vietnam War.

The "March for Our Lives" rallies are a call to action by student survivors of last month's school shooting in Florida that left 17 people dead.

At Washington's "March for Our Lives" rally, throngs jammed Pennsylvania Avenue for blocks. Tens of thousands of teenagers and their supporters roared their approval as survivors of the Parkland, Florida, assault spoke from the stage. One of them, Delaney Tarr, laid down the students' central demand, a ban on assault-type weapons, and declared "We will continue to fight for our dead friends."

The Washington crowd was well into the tens of thousands. A vast crowd also rallied in New York City and large marches unfolded in Boston, Chicago, Houston, Minneapolis and scores of other cities. More than 20,000 rallied in Parkland near the school.

"We are done hiding, we are done being afraid and full of fear," said Ryan Deitsch, a survivor of the shooting at Marjory Stoneman Douglas High School in Parkland, Florida.

The marches were organized just weeks after the Florida school shooting, the latest mass shooting at a U.S. school by a gunman who indiscriminately took the lives of innocent students.

According to the March For Our Lives online petition, the movement is demanding a ban on the sale of assault weapons like the AR-15 used by the shooter in Parkland; a ban on the sale of high-capacity magazines; and the closure of loopholes in the current U.S. background check system.

New York City's march drew tens of thousands of people who set out near Trump Tower, while marchers in Washington passed Trump Hotel on Pennsylvania Avenue.

President Donald Trump, a supporter of the constitutional amendment that guarantees U.S. citizens' right to bear arms, opted to spend the weekend not in Washington, but at his resort in Florida.

Marches also were held in that state, including in Parkland, where tens of thousands turned out, the Miami Herald reported.