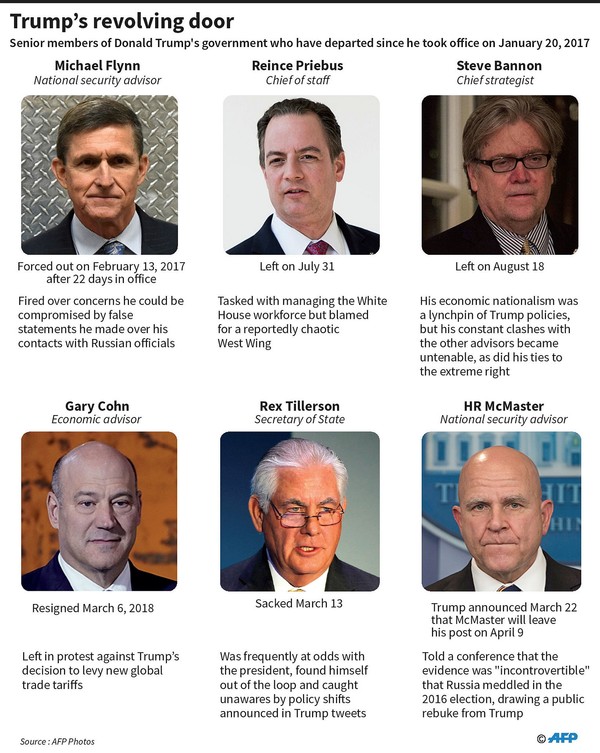 McMaster's exit is the latest in a string of high-profile departures from the White House that started with national security advisor Michael Flynn and has also included chief of staff Reince Priebus, chief strategist Steve Bannon, economic advisor Gary Cohn and Tillerson.

Turnover among White House senior staff during Trump's first year was at least twice as high as that of any of the five past presidencies, according to Brookings Institute research.

Trump never personally gelled with McMaster and the president recently told White House Chief of Staff John Kelly that he wanted McMaster replaced, according to the Post. He has complained that McMaster, a three-star Army general, is too rigid and that his briefings go on too long and seem irrelevant, the Post reported.

Trump had mused to advisers and outside allies about McMaster's ouster for months — the pair had never formed a strong rapport — and rumors of his replacement had swirled in Washington for months.

Some White House staff rejected suggestions they had misled the public about McMaster's status. At the same time, they maintained the decision to remove him had been long in coming and was not a response to Tuesday's leak of briefing papers related to Trump's phone call with Russian President Vladimir Putin, a disclosure that had generated considerable criticism and fresh speculation that McMaster was in trouble. They also insisted Sanders' tweeted assurances about McMaster were true — that even as Trump considered ousting McMaster, the president hadn't made the final call.

McMaster is Trump's second national security adviser, succeeding Flynn, who was dismissed a year ago for misleading Vice President Mike Pence about his contacts with the Russian ambassador to the United States.