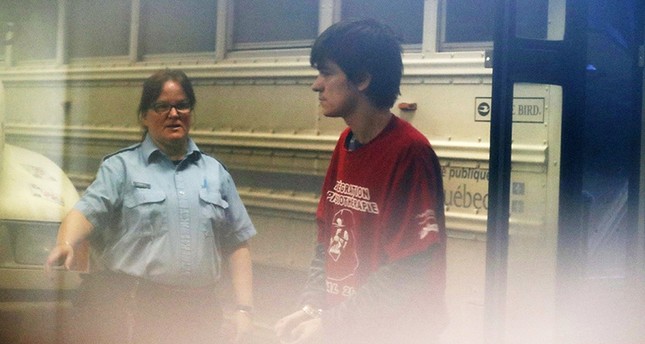 Alexandre Bissonnette, a suspect in a shooting at a Quebec City mosque, arrives at the court house in Quebec City, Quebec, Canada February 21, 2017. (Reuters Photo)

A Canadian man went on trial Monday for an attack on a Quebec City mosque last year, pleading not guilty to charges of shooting to death six worshippers and wounding many others.

As each of the 12 counts of murder and attempted murder against him were read out in court, Alexandre Bissonnette, 28, murmured: "Not guilty."

The rampage on January 29, 2017 was one of the deadliest ever against Muslims in a Western country, leaving six dead and more than 30 injured, including one man who is now tetraplegic.

The gunman opened fire at the end of Sunday prayers at Quebec City's Islamic Cultural Center, a mosque located in a normally quiet neighborhood.

Police say Bissonnette called an emergency line after the shooting and confessed. They found him in his car, parked on the side of a rural road about 20 kilometers (12 miles) from the mosque, and arrested him.

Judge François Huot has ordered a publication ban on evidence to be presented at the trial.

The accused appeared to show little interest in the court proceedings, only occasionally glancing in the direction of his lawyers.

Over the coming days, the court will select 12 jurors for the trial by judge and jury, from a list of 600, of which nearly one-fifth have asked to be recused.

The prosecution and defense are expected to then present a joint statement of facts, followed by the first witnesses expected to testify.

The trial is scheduled to last until the end of May.

For the survivors and their families, seeing Bissonnette in court brought back painful memories. They attended the proceedings hoping to gain some understanding of why such violence was unleashed on them.

Described by Prime Minister Justin Trudeau as a "terrorist attack," the shooting spree was a brutal blow to Canada's multicultural, open and tolerant society, and to a nation that welcomes tens of thousands of refugees each year.

Introverted, educated and with no particularly interesting backstory, Bissonnette was revealed after his arrest to be a white supremacist opposed to Muslim immigration, but not affiliated with any group.

The six murder victims were Canadian dual nationals born in Algeria (two), Guinea (two), Morocco and Tunisia, and who had long ago resettled in Quebec.

They were a scholar, a butcher, a daycare operator, a food industry worker, a public servant and a computer programmer -- all connected by faith.

In the aftermath, Trudeau and others gathered in the city to express their solidarity with the Muslim community.

But the attack also emboldened nationalist and right-wing extremists who have become more vocal against immigration and "radical Islam," despite distancing themselves from the young attacker seemingly inspired by their rhetoric.

Since the shooting, a pig's head has been left on the steps of the mosque, and the mosque president's car was deliberately set on fire.

Last March, nearly 200 demonstrated against a motion in Canada's parliament condemning Islamophobia. It passed 201 to 91.