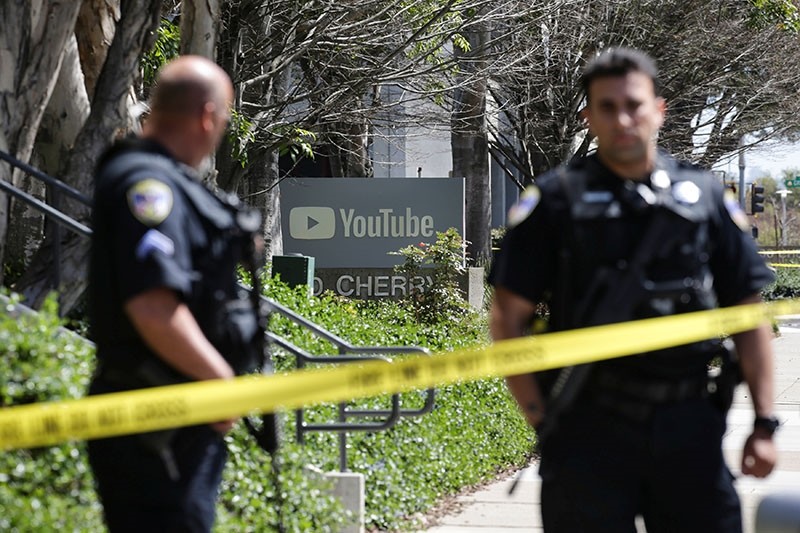 A woman opened fire with a handgun Tuesday in a courtyard at YouTube headquarters, wounding three people before fatally shooting herself in what is being investigated as a domestic dispute, authorities said.

YouTube employee Dianna Arnspiger said she was on the building's second floor when she heard gunshots, ran to a window and saw the shooter on a patio outside.

She said the woman wore glasses and a scarf and was using a "big huge pistol."

"It was a woman and she was firing her gun. And I just said, 'Shooter,' and everybody started running," Arnspiger said.

She and others hid in a conference room for an hour while another employee repeatedly called 911 for updates.

"It was terrifying," she said.

Two law enforcement officials identified the suspect later Tuesday as Nasim Aghdam of Southern California and said the shooting was being investigated as a domestic dispute. The officials spoke on the condition of anonymity because they were not authorized to discuss the case.

Aghdam was angry at YouTube because it had stopped paying her for videos she posted on the platform, her father told the Bay Area News Group . People who post on YouTube can receive money from advertisements that accompany their videos, but the company "de-monetizes" some channels for reasons including inappropriate material or having fewer than 1,000 subscribers.

YouTube had "stopped everything," and "she was angry," Ismail Aghdam said in a telephone interview from his San Diego home.

Ismail Aghdam said he reported his daughter missing on Monday after she did not answer her phone for two days.

He said the family received a call from Mountain View police around 2 a.m. Tuesday saying they found Nasim sleeping in a car.

Mountain View Police spokeswoman Katie Nelson confirmed officers located a woman by the same name asleep in a vehicle asleep in a Mountain View parking lot Tuesday morning. Nelson said the woman declined to answer further questions but the police spokeswoman did not respond to a question about whether police were warned Aghdam might go to YouTube.

Ismail Aghdam said his daughter was a vegan activist and animal lover.

Witnesses described terror before officers arrived and discovered a victim near a front door and then found the shooter several minutes later with what appeared to be a self-inflicted gunshot wound, San Bruno Police Chief Ed Barberini said.

He said two additional gunshot victims were found at an adjacent business minutes later. Barberini initially said there were four people who had been shot but later clarified that a fourth person had suffered an ankle injury.

Zach Vorhies, 37, a senior software engineer at YouTube, said he was at his desk working on the second floor of one of the buildings when the fire alarm went off. He got on his skateboard and approached a courtyard, where he saw the shooter yelling, "'Come at me, or come get me.'"

He saw somebody lying nearby on his back with a red stain on his stomach that appeared to be from a bullet wound. Vorhies said he realized there was an active shooter when a police officer with an assault rifle came through a security door.

He said the public can access the courtyard where he saw the shooter during work hours.

Michael Finney, a 21-year-old supervisor at Carl's Jr. across from the campus, said he came out of the bathroom to see a woman in a booth bleeding from the calf. Two friends were trying to stop the bleeding, using the victim's sweatshirt as a tourniquet, but it wasn't helping, he told the San Jose Mercury News.

"Everyone was figuring out what to do," Finney said. "I was trying to stay calm and see what I could do. Everybody is shocked."

Google, which owns the world's biggest online video website, said the company's security team worked with authorities to evacuate buildings and was doing whatever it could support the victims and their families.

YouTube's headquarters has more than a thousand engineers and other employees in several buildings. Originally built in the late 1990s for the clothing retailer Gap, the campus south of San Francisco is known for its sloped green roof of native grasses.

Inside, Google famously outfitted the office several years ago with a three-lane red slide for workers to zoom from one story to another.

"Today it feels like the entire community of YouTube, all of the employees, were victims of this crime," said Chris Dale, a YouTube spokesman. "Our hearts go out to all those who suffered."

The White House said President Donald Trump was briefed on the shooting and that officials were monitoring developments.