Brazil's Lula says he will turn himself in, defends innocence 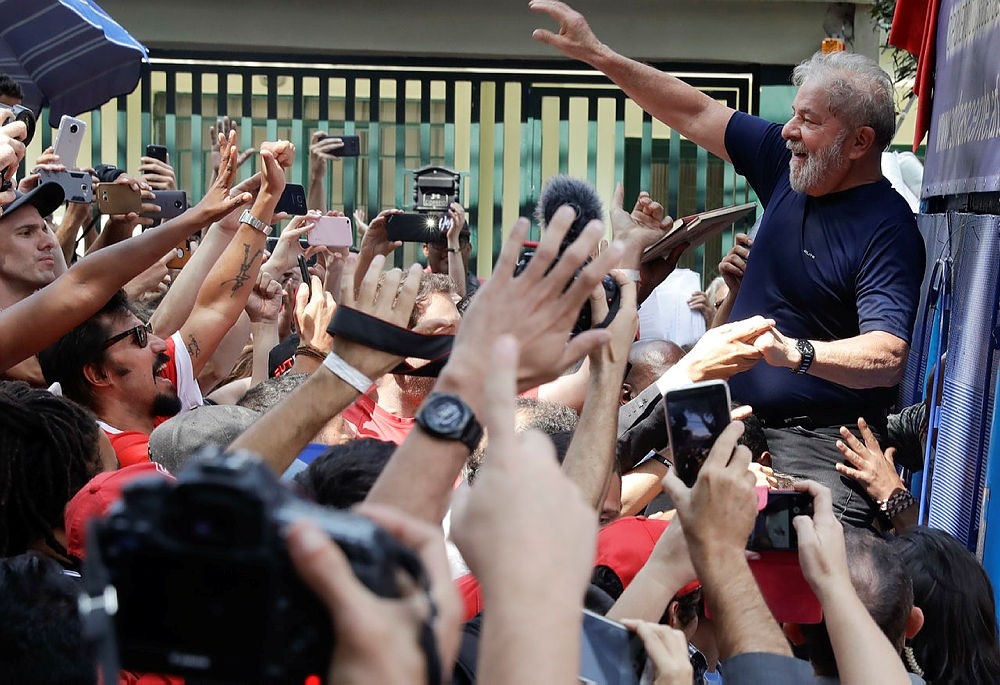 Brazil's election frontrunner and leftist icon Luiz Inacio Lula da Silva aborted an attempt to surrender to police and start his prison sentence for corruption Saturday when a crowd of supporters mobbed his car and prevented him from leaving.

In chaotic scenes, scores of leftist activists swarmed around his car and blocked the gate at the metalworkers' union building in Sao Bernardo do Campo, near Sao Paulo, forcing the 72-year-old two-term president to retreat.

He had been on his way out of the building to hand himself in to police. But as soon as Lula got into the gray vehicle, activists pushed against the metal gates, so that they could not be opened, almost knocking them down.

Meanwhile, another group attempted to mob the car itself.

Finally, Lula exited the car, squeezing through the tightly packed crowd and pausing to embrace one man, before returning into the metalworkers' union building where he has been holed up for the past two days.

Lula was ordered to surrender to police by Friday but missed the deadline while his lawyers pursued appeals in the courts.

Earlier Saturday, he told several thousand of his supporters at the union building that he was innocent but would accept arrest.

He was due to be taken to the southern city of Curitiba to start serving a 12-year sentence for taking a luxury apartment as a bribe from a construction company.

Addressing supporters, an emotional and combative Lula called himself "an outraged citizen" over his conviction. He said that Brazil's top anti-corruption judge, Sergio Moro, "lied" about him being given the apartment by a big construction firm as a kickback.

"I am the only human being to be put on trial for an apartment which does not belong to me," he said.

But, crucially, Lula said he would drop his dramatic show of resistance and hand himself in. "I will comply with their warrant," he said.

Despite his legal problems, Lula is the front runner in polls ahead of Brazil's October presidential election and his exit from the race would throw it wide open. A hard-right former army officer, Jair Bolsonaro, is currently polling in second place.

In his hour-long speech, Lula accused the judiciary and Brazil's most powerful media conglomerate of assisting a right-wing coup with the ultimate aim of preventing him from competing in the race.

"They don't want me to take part," he said. "Their obsession is to get a photo of Lula as a prisoner."

"You'll see that I will come out of this bigger, stronger," he said, promising to prove his innocence.

After the speech, Lula was lifted onto the shoulders of supporters who chanted, "I am Lula."

Lula was convicted last year of taking a luxury seaside apartment near Sao Paulo as a kickback from OAS, the construction company. He lost a lower court appeal in January and saw his sentence increased from nine to 12 years.

He also faces multiple other court cases and is considered the biggest scalp so far for prosecutors with the mammoth anti-graft probe, dubbed "Car Wash" -- an unravelling of systemic bribery and embezzlement in the top echelons of Brazilian politics.

Ever since Wednesday, Lula and his supporters have tried everything to delay the start of his prison sentence, battling everywhere from the Supreme Court to the streets.

To his Workers' Party faithful, Lula is a victim of an out-of-control judiciary preventing him from returning to power.

They remember him for a 2003-2010 presidency that saw tens of millions lifted from poverty and Brazil rise on the world stage.

However, Lula's imminent arrest is being celebrated by many Brazilians.