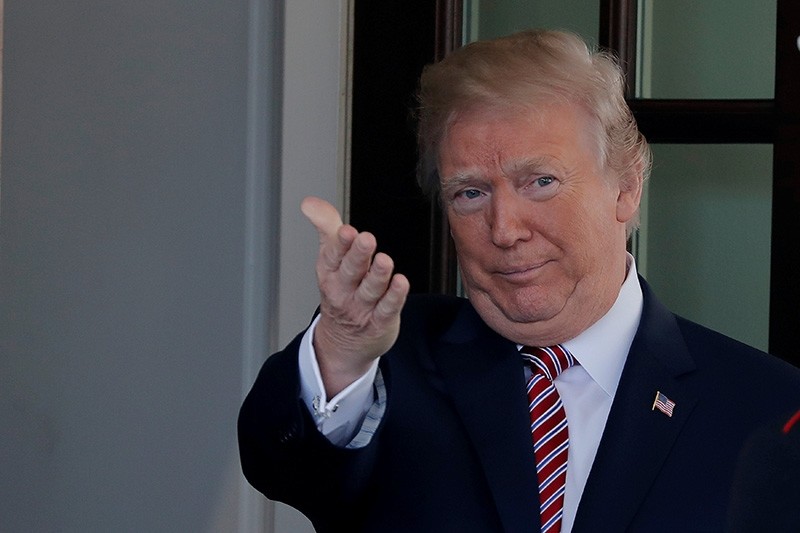 That's according to a report Tuesday from The New York Times. The newspaper, citing several people briefed on the investigation, reported that FBI agents were looking for records of payments to ex-Playmate Karen McDougal and also information related to the publisher of The National Enquirer.

The raid prompted a new blast Tuesday from the president, who tweeted that "Attorney-client privilege is dead!" And White House press secretary Sarah Huckabee Sanders said that the president thinks he can fire special counsel Robert Mueller, but isn't taking that step now.

McDougal has said she carried on an affair with Trump in 2006 after the birth of his son. The Enquirer's publisher, American Media Inc., paid McDougal $150,000 but never published her story. AMI has said she was paid to become a fitness columnist.

The Associated Press has confirmed that agents on Monday also seized records related to a $130,000 payment made to Daniels, who says she had sex with Trump in 2006.

A furious Trump, who in the past month has escalated his attacks on Mueller's Russia investigation, said Monday from the White House that it was a "disgrace" that the FBI "broke into" his lawyer's office. He called Mueller's investigation "an attack on our country," prompting new speculation that he might seek the removal of the Justice Department's special counsel.

On Tuesday, Sanders said Trump believes the raid on Cohen's office went "too far," but she also said that it's a separate investigation from Mueller's probe. Still, Trump "certainly believes that he has the power" to directly fire Mueller, she said, and he has been advised that he has that authority. She did not say where the advice came from.

Justice Department guidelines say only Deputy Attorney Rod Rosenstein, who appointed Mueller last May, has the authority to fire him and only for specific cause. Rosenstein has repeatedly said that he has not seen any reason to dismiss Mueller

The raid was overseen by the U.S. Attorney's office in Manhattan and was based in part on a referral from Mueller, said Cohen's lawyer, Stephen Ryan.

"The decision by the U.S. Attorney's Office in New York to conduct their investigation using search warrants is completely inappropriate and unnecessary," Ryan said in a statement. "It resulted in the unnecessary seizure of protected attorney client communications between a lawyer and his clients."

The raid creates a new legal headache for Trump as he and his attorneys weigh whether to agree to an interview with Mueller's team, which in addition to investigating potential ties between Russia and the Trump campaign is also examining whether the president's actions constitute obstruction of justice.

And the law enforcement action will almost certainly amplify the public scrutiny on the payment to Daniels, who says she had sex with Trump in 2006. The payment was made just days before the 2016 presidential election. Trump told reporters last week that he did not know about it.

Search warrants are a fairly standard, though aggressive, law enforcement tool and are often sought in cases where authorities are concerned someone may hide or withhold evidence. To obtain one, agents must convince a judge they have probable cause of criminal activity and they believe they'll find evidence of wrongdoing in a search. A warrant requires high-level approval within the Justice Department, and agency guidelines impose additional hurdles when the search target is an attorney.

In this case, Mueller opted to refer the matter to federal prosecutors in Manhattan. Besides Cohen's office, agents also searched a hotel room where he's been staying while his home is under renovation.

Under Justice Department regulations, Mueller must consult with Rosenstein when his investigators uncover new evidence that may fall outside his original mandate. Rosenstein then will determine whether to allow Mueller to proceed or to assign the matter to another U.S. attorney or another part of the Justice Department.

A spokesman for Mueller's office did not immediately return a call seeking comment. The U.S. attorney's office had no comment. Monday's raid was first reported by The New York Times.

Ryan did not elaborate on the documents taken from Cohen's office but said he has cooperated with investigators, including meeting last fall with lawmakers looking into Russian interference in the 2016 election.

Cohen has more recently attracted attention for his acknowledgment that he paid Daniels out of his own pocket shortly before the 2016 presidential election. Cohen has said neither the Trump Organization nor the Trump campaign was a party to the transaction with Daniels and he was not reimbursed for the payment.

Several former officials at the Federal Election Commission have said the payment appears to be a violation of campaign finance laws, and multiple Washington-based groups have filed complaints with the FEC, urging it to investigate.

There have been few signs that Mueller was interested in investigating the payment, though. One Mueller witness, former Trump aide Sam Nunberg, recently connected the special counsel with the payment, saying in an interview on MSNBC last month that prosecutors had asked him about payments to women.

Trump answered questions about Daniels for the first time last week, saying he had no knowledge of the payment made by Cohen and he didn't know where Cohen had gotten the money. The White House has consistently said Trump denies the affair.

Daniels has said she had sex with the president in 2006. She has been suing to invalidate the nondisclosure agreement she signed before the election and has offered to return the money she was paid in order to "set the record straight."

Daniels argues the agreement is legally invalid because it was signed by only Daniels and Cohen, and was not signed by Trump.

Last month, Daniels' attorney, Michael Avenatti, sent letters to the Trump Organization demanding the business preserve all of its records relating to the $130,000 transaction.

The letter demanded they preserve all emails by Cohen that mention Daniels, whose real name is Stephanie Clifford, as well as any emails and text messages related to the alleged relationship. He sent similar demand letters to two banks, City National and First Republic, asking they preserve documents connected to the transaction.

Avenatti also enclosed an email showing Cohen had used his Trump Organization email address in correspondence with a representative from First Republic. In the email, the representative said funds had been deposited in Cohen's account.