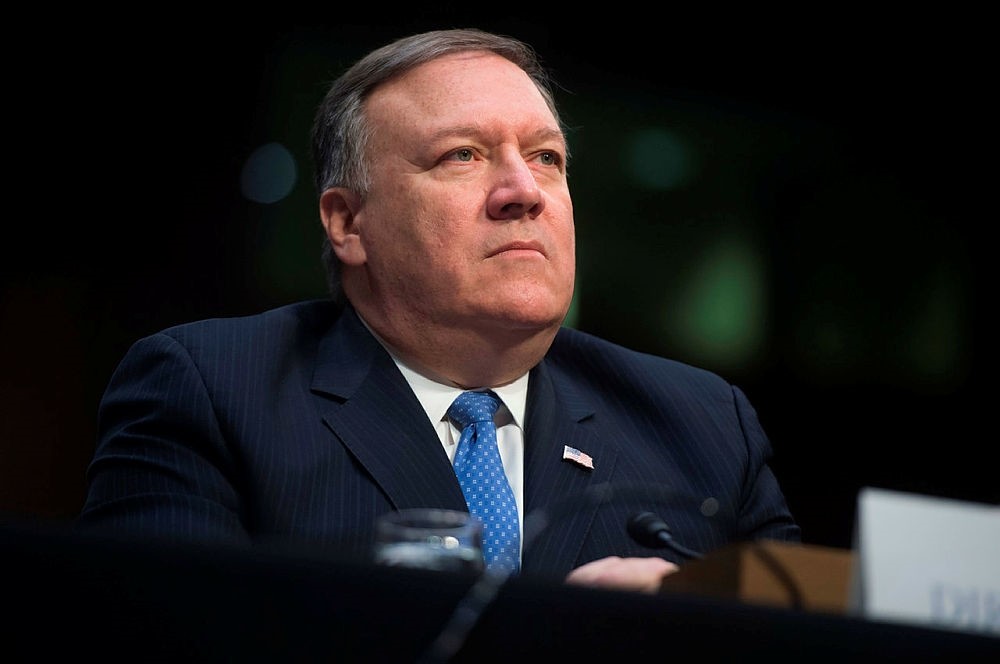 In this file photo taken on February 13, 2018 CIA Director Mike Pompeo testifies on worldwide threats during a Senate Intelligence Committee hearing on Capitol Hill in Washington, DC. (AFP Photo)
by Daily Sabah with Agencies Apr 12, 2018 12:00 am

Mike Pompeo, currently the director of the Central Intelligence Agency (CIA), has been tapped to replace Rex Tillerson as secretary of state, in what could be one of the more consequential of many personnel shakeups since Trump took office 14 months ago.

Pompeo is a known entity for Trump, someone who briefed the president nearly daily and shares Trump's aggressive attitude towards Iran.

Trump forged a warm relationship with Pompeo during White House meetings over the first year of his presidency and has said he feels the former Republican congressman shares more of his view of the world than Tillerson, who at times disagreed with the president.

From proposing a ban on Muslims entering the United States, to opposing letting in Syrian refugees to suggesting that these refugees could be posing as militants, Trump hasn't shied away from voicing his anti-Muslim views. He even claimed that thousands of New Jersey Muslims cheered the Sept. 11, 2001 attacks - still an unfounded allegation.

As with Trump, many diplomats have voiced apprehension about Pompeo's record of anti-Muslim remarks and ties to anti-Islam groups.

Most recently in March 2016, Pompeo criticized the Islamic Society of Wichita (ISW) for inviting Texas imam Monzer Taleb to speak at an event. The CIA director had called Taleb a "Hamas-connected sheik."

In 2016, the anti-Muslim group ACT for America awarded Pompeo with its highest honor, the National Security Eagle Award. The group's president Brigitte Gabriel called him "a steadfast ally" from day one after giving him the award.

The ACT has protested the construction of mosques and school textbooks for including information about Islam, which according to Gabriel is an 'intrinsically' violent religion.

In an interview in February 2015 on a radio program of Frank Gaffney Jr., the president and founder of the far-right leaning Center for Security Policy, Pompeo said "There are organizations and networks here in the United States tied to radical Islam in deep and fundamental ways," warning of an 'Islamic' conspiracy against America.

Gaffney's think tank alleged that mosques and Muslims across the U.S. were trying to "Islamize" the country by using American pluralism and democracy to their advantage.

In his hometown of Wichita in 2014, Pompeo told a church group that Muslims "abhor Christians and will continue to press against us," adding that he will "stand and fight and make sure we know that Jesus Christ as our savior is truly the only solution for our world."

He also said the "threat to America" was caused by "the people who deeply believe that Islam is the way."

In a speech shortly after the Boston Marathon bombing in 2013, Pompeo who was a congressman from Kansas at the time criticized Muslim groups' "silence in the face of extremism."

This "casts doubt upon the commitment to peace among adherents of the Muslim faith" and "has made these Islamic leaders across America potentially complicit in these acts," he said.

However, in reality, dozens of American Muslim organizations had issued statements condemning the bombing within hours of the attack.

Meanwhile, Pompeo has been less vocal about his problematic positions and has tried to avoid controversy since being appointed to the lead the CIA.

A CIA spokesman said Pompeo had "worked extensively and successfully" at strengthening the agency's relationships with countries throughout the Muslim world.

Since being nominated last month, Pompeo has spent much of his time at the State Department immersing himself in briefing books and undergoing mock hearings and prep meetings on key issues like Iran, Syria and North Korea, as well as the inner workings of the State Department, a person close to Pompeo said. He's also spoken to all eight living former secretaries — including Hillary Clinton, whom he famously criticized over the 2012 attack on U.S. facilities in Benghazi, Libya.