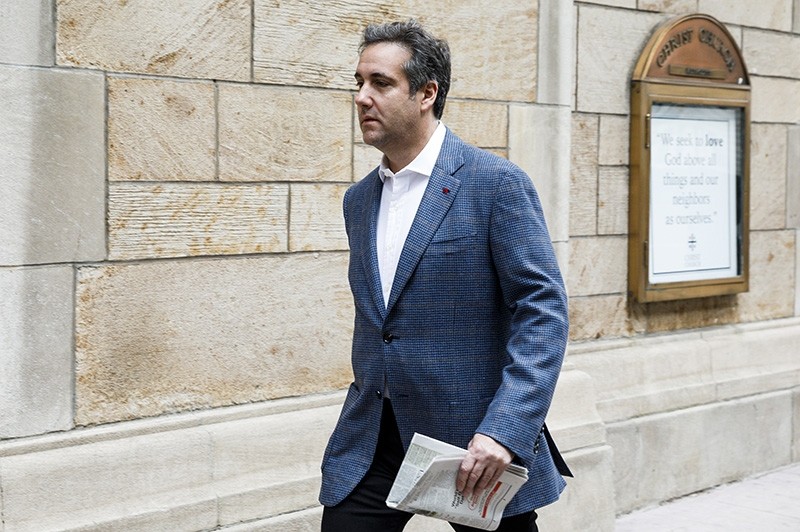 Lawyers for President Donald Trump's personal attorney, Michael Cohen, asked a federal judge Friday to get the first look at documents and devices seized from Cohen's office and hotel room during an FBI raid to exclude items they believe are protected by attorney-client privilege.

In the hour-long court hearing, U.S. District Judge Kimba Wood said Cohen's lawyers have asked to "take the first cut at identifying documents that are relevant or not relevant to the investigation."

An attorney for the president, Joanna Hendon, appeared as well, telling the judge that Trump has "an acute interest in these proceedings and the manner in which these materials are reviewed."

"He is the president of the United States," she said. "This is of most concern to him. I think the public is a close second. And anyone who has ever hired a lawyer a close third."

Assistant U.S. Attorney Tom McKay told the judge that he believed the proceedings were an attempt to delay the processing of materials seized in the search.

"The issues here are straightforward," he said.

Of Trump, McKay said: "His attorney-client privilege is no greater than any other person who seeks legal advice."

Federal agents seized records on a variety of subjects in raids Monday on Cohen's Manhattan office, apartment and hotel room, including payments that were made in 2016 to women who might have damaging information about Trump.

The court hearing Friday didn't provide new insight into why agents seized the items, but the judge, prosecutors and the attorneys all spoke openly about an investigation that previously has been shrouded in secrecy.

Wood adjourned the hearing until 2 p.m. It was unclear whether that session will be open or closed to the public. The judge said sealing the proceedings might be needed to protect "the privacy interests of potentially innocent people."

Ordinarily, documents or communications seized from a lawyer by FBI agents would be reviewed by a team of Justice Department lawyers not directly involved in the investigation to determine which documents were relevant to the probe, and which should be off-limits to investigators because of attorney-client privilege.

The judge said prosecutors believed either a special "taint team" of government lawyers should decide what evidence can be properly viewed by criminal prosecutors. Or, they said, the court could appoint a special master for that purpose.

Hendon asked for a delay in court proceedings until at least Monday, saying she needed to research the law.

Clifford's lawyer, Michael Avenatti, was in the audience for the court session and asked the judge to be heard at 2 p.m.

"We have every reason to believe that some of the documents seized relate to my client," he said.

Trump has called the raids a "witch hunt," ''an attack on our country," and a violation of rules that ordinarily make attorney client communications confidential.

Those confidentiality rules can be set aside under certain circumstances if investigators have evidence that a crime has been committed.

Public corruption prosecutors in the U.S. attorney's office in Manhattan are trying to determine, according to one person familiar with the investigation, if there was any fraud related to payments to McDougal and Clifford.

McDougal was paid $150,000 in the summer of 2016 by the parent company of the National Enquirer under an agreement that gave it the exclusive rights to her story, which it never published. Cohen said he paid Daniels $130,000 in exchange for her silence about her claim to have had a one-night-stand with Trump.

The White House has consistently said Trump denies either affair.

According to a report Friday in the Wall Street Journal, Cohen in late 2017 negotiated a $1.6 million settlement with a former Playboy model who said she was impregnated by Elliot Broidy, a top Republican fundraiser.

The deal on behalf of Broidy, deputy finance chairman of Republican National Committee with ties to Trump, resembles Cohen's alleged settlement with Daniels.