US House GOP sets eye on McCarthy, Scalise for Speaker 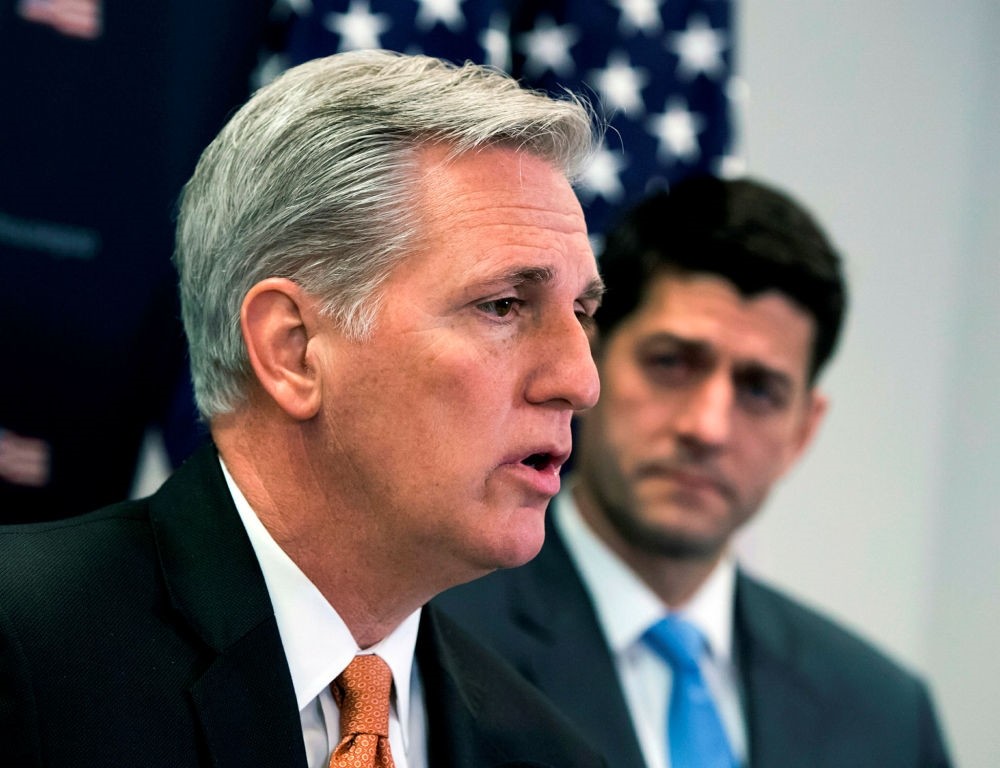 Representative Kevin McCarthy (L) joined by Speaker of the House Paul Ryan talks with reporters at the U.S. Capitol in Washington, Feb. 6.
by Daily Sabah with Wires Apr 13, 2018 12:00 am

Since House Speaker Ryan is set to not run for re-election, all eyes have turned to representatives McCarthy and Scalise of California and Louisiana respectively, who are both equally popular but have differing policy approaches

Some say it's a fight between West and South, or a battle for President Donald Trump's affections or a test of who can woo conservatives, but one thing is clear: If the showdown between California Rep. Kevin McCarthy and Louisiana Rep. Steve Scalise for House speaker is a popularity contest, it will be tight.

"Steve is the more low-key guy, Kevin is more the big handshake, but they're equally popular," said Rep. Peter King, R-N.Y. "It's not like right versus left or a good guy versus a bad guy."

House Speaker Paul Ryan told colleagues Wednesday he wouldn't seek re-election in November, implicitly starting the race to replace him. Disconcertingly for the GOP, Trump's unpopularity and early Democratic momentum leave it unclear whether Ryan's replacement will be speaker or minority leader. For now, McCarthy and Scalise are seen as the chief contenders. 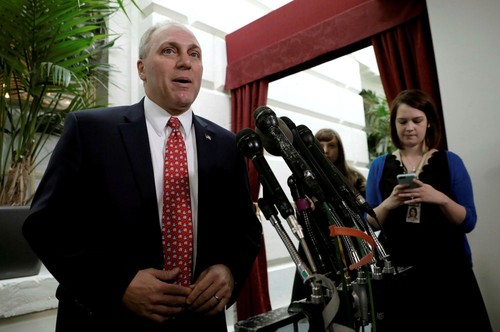 Representative Steve Scalise speaks to reporters at the U.S. Capitol in Washington, May 4.

McCarthy, 53, an affable California who has developed a rapport with Trump, is from a Central Valley district. He was elected in 2006 and rocketed into a leadership job in 2009, thanks to his campaigning for fellow Republicans. He replaced Eric Cantor as majority leader in 2014 after the Virginian unexpectedly lost a primary for his House seat and quit.

Scalise, 52, the House GOP vote counter first elected a decade ago, had little national name recognition when tragedy thru

st him into headlines. He was shot at a congressional baseball practice last year and has slowly come back from his injuries.

The former state legislator and Louisiana conservative has earned the respect of his fellow lawmakers. "The strength he's shown with his injury, I think, has heightened where he is" among colleagues, said Rep. Phil Roe, R-Tenn.

Lawmakers and GOP donors want a leader who can raise money, and here McCarthy has an advantage. His leadership political committee has reported contributing more than triple that of Scalise's total to GOP candidates since January 2017.

Neither man is known for rhetorical flourishes, and both have resume problems that fellow Republicans insisted they'd overcome.

In 2014, Scalise was discovered to have addressed a white-supremacist group in 2002 founded by former Ku Klux Klan leader David Duke. Scalise apologized and said he'd been unaware of Duke's racial views or his affiliation to the KKK. McCarthy suggested in 2015 that a House committee probing the deadly 2012 raid on the U.S. embassy in Benghazi, Libya, had damaged Democratic presidential candidate Hillary Clinton's poll numbers, undermining GOP arguments that the

That raised questions about his ability as a communicator, a key for party leaders; however he was one of President Trump's earliest and most loyal congressional supporters in the 2016 presidential race.

"You have a lot of the Southern states who are looking to shift leadership back to that part of the country," said Rep. Steve Russell, R-Okla. Scalise is viewed as more conservative than McCarthy, important in a House GOP conference that's drifted to the right. That could be intensified after November when Republicans are expected to lose seats, and many of those departing will be moderates.

Conservative groups have awarded Scalise modestly stronger voting ratings than McCarthy. But McCarthy has worked to improve his relationship with conservatives, including trying to craft legislation cutting spending from the government budget enacted recently.

Either man could cut a deal with the House Freedom Caucus. Those roughly 30 conservative members could theoretically deliver their votes to a contender in exchange for a promise to back a caucus member for a leadership post.

Rep. Mark Meadows, R-N.C., who heads the Freedom Caucus, said a candidate's willingness to listen to all lawmakers is "probably the top priority" for backing someone.

Neither Scalise nor McCarthy would acknowledge a race for Ryan's job or definitively deny it. Scalise said it's not "time to talk about what titles people want," while McCarthy said: "There is no leadership election. Paul is speaker."

Those close to Scalise say he is unlikely to directly challenge McCarthy, but he doesn't need to. By offering himself as an alternative choice, ready in case McCarthy fails to muster support, he is essentially making an indirect bid for the top post.

Congressional leadership races often move quickly, with candidates rushing to win supporters and outmaneuver rivals. Several lawmakers said privately such moves are underway. But others said the race could stretch until after the election clarifies the number, ideology and mood of House Republicans.