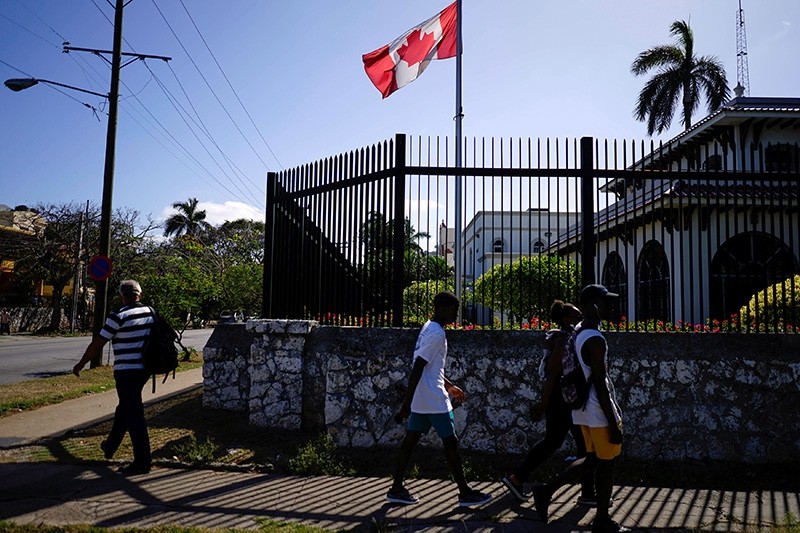 People pass by the Canada's Embassy in Havana, Cuba (Reuters Photo)
by Compiled from Wire Services Apr 17, 2018 12:00 am

Canada's foreign ministry said Monday that it is ordering families of diplomatic staff in Cuba to return home amid questions about mysterious health symptoms detected in 10 people who were stationed on the island.

Canadian diplomats will no longer be accompanied by family members in Cuba because of what it called "ongoing uncertainty" over the cause of the ailments, the ministry said in a statement. Spouses, children or even parents of diplomats already with them in Havana will begin leaving immediately.

While there had been no new cases since the second half of last year, diplomatic families returning to Canada had continued to report symptoms including dizziness, headaches and inability to concentrate, Global Affairs Canada said in a statement.

It said that in some cases the symptoms had appeared to "lessen in intensity, before reasserting themselves."

From now on, it said, diplomats posted to Cuba would be unaccompanied by their families.

U.S. diplomats in Cuba began reporting similar mystery symptoms in 2016 and Washington reportedly began investigating the possibility that they had been targeted by ultrasonic devices.

The Canadian government has since ruled out such devices and illnesses with psychological origins as possible causes, according to CBC News.

Canada on Monday said American and Canadian specialists examining those affected had "raised concerns for a new type of a possible acquired brain injury."

"Additional research is needed to better understand this. The cause remains unknown but could be human-made," it said, adding that water and air quality testing had not revealed anything that could point to a cause.

Global Affairs also emphasized that it had a "positive and constructive relationship with Cuba and has received close cooperation from the Cuban authorities since health concerns of Canadians serving in Cuba first surfaced in the spring of 2017."