US military cargo aircraft crashes near Georgia airport, killing all 9 aboard 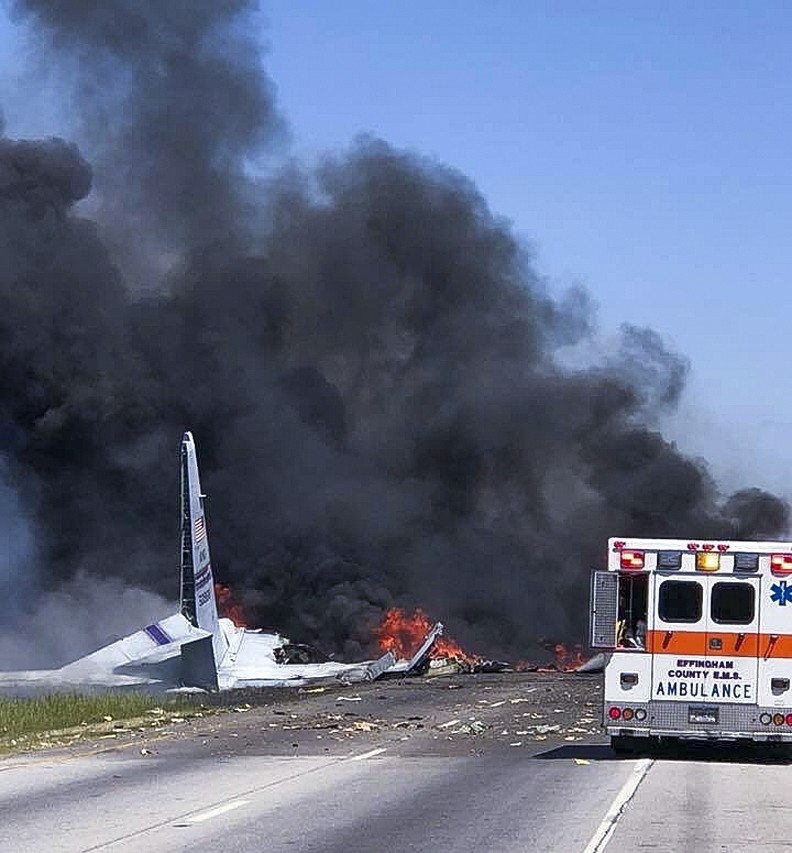 A handout photo made available by the Savannah Professional Firefighters Association on 02 May 2018 shows an apparent military aircraft crash outside of Savannah, in Port Wentworth, Georgia. (EPA Photo)
by Daily Sabah with AP May 02, 2018 12:00 am

The Air Force said the plane belonged to the 156th Air Wing out of Puerto Rico, and Puerto Rico National Guard Spokesman Maj. Paul Dahlen told The Associated Press that all those aboard were Puerto Ricans who had recently left the U.S. territory for a mission on the U.S. mainland.

Officials said the plane, a Hercules WC-130, was believed to be around 50 years old but was in good mechanical condition, and was making what had been scheduled to be its last flight. Officials said it was too soon to speculate about the cause of the crash. The WC-130 is a transport workhorse of the U.S. military.

The plane went down at about 11:30 a.m. (1530 GMT), shortly after takeoff from the Savannah/Hilton Head International Airport, about 175 miles (280 km) southeast of Atlanta, officials said.

All nine crew members died, Brigadier General Isabelo Rivera, assistant general of the Puerto Rico Air National Guard, said in a statement, adding their names will not be released until their relatives have been notified.

Rivera said the National Guard and U.S. Air Force had launched an investigation, and that it was too early to talk about what may have caused the crash.

"We are saddened by the plane accident that occurred today in Georgia," Puerto Rico Gov. Ricardo Rossello said in a tweet Wednesday. "Our prayers are with the families of the Puerto Rican crew."

The plane, which was on a training mission, was headed to the Aerospace Regeneration and Maintenance Group in Tucson, Arizona and was going to be essentially retired after Wednesday's flight, Major Paul Dahlen, spokesman for the Puerto Rico National Guard, told Pentagon reporters.

"It was basically its last flight," Dahlen said. "Although it was an older aircraft, it was in good mechanical condition. I think it was 50-plus years old, but it was still, with all of the modern updates of a regular (WC-130)."

Of the nine people on board, five were crew members and four were passengers who were military maintenance and operations personnel, all from the Puerto Rico Air National Guard.

The four-engine plane sent up a towering cloud of black smoke, with a tail wing coming to rest on a highway median, television images showed. A witness, Michael Garrett, told WSAV-TV on Wednesday the plane was upside down before it crashed.

"That plane really flipped over on its back, slowly, like it was in slow motion," Garrett said.

Gena Bilbo, spokeswoman for the Effingham County Sheriff's Department, told reporters it was "an absolute miracle" that no vehicles were hit in the busy intersection at the crash site.

The crash was at least the fifth fatal accident involving a U.S. military aircraft since early April.

In July last year, 16 service members were killed in a WC-130 crash in Mississippi.