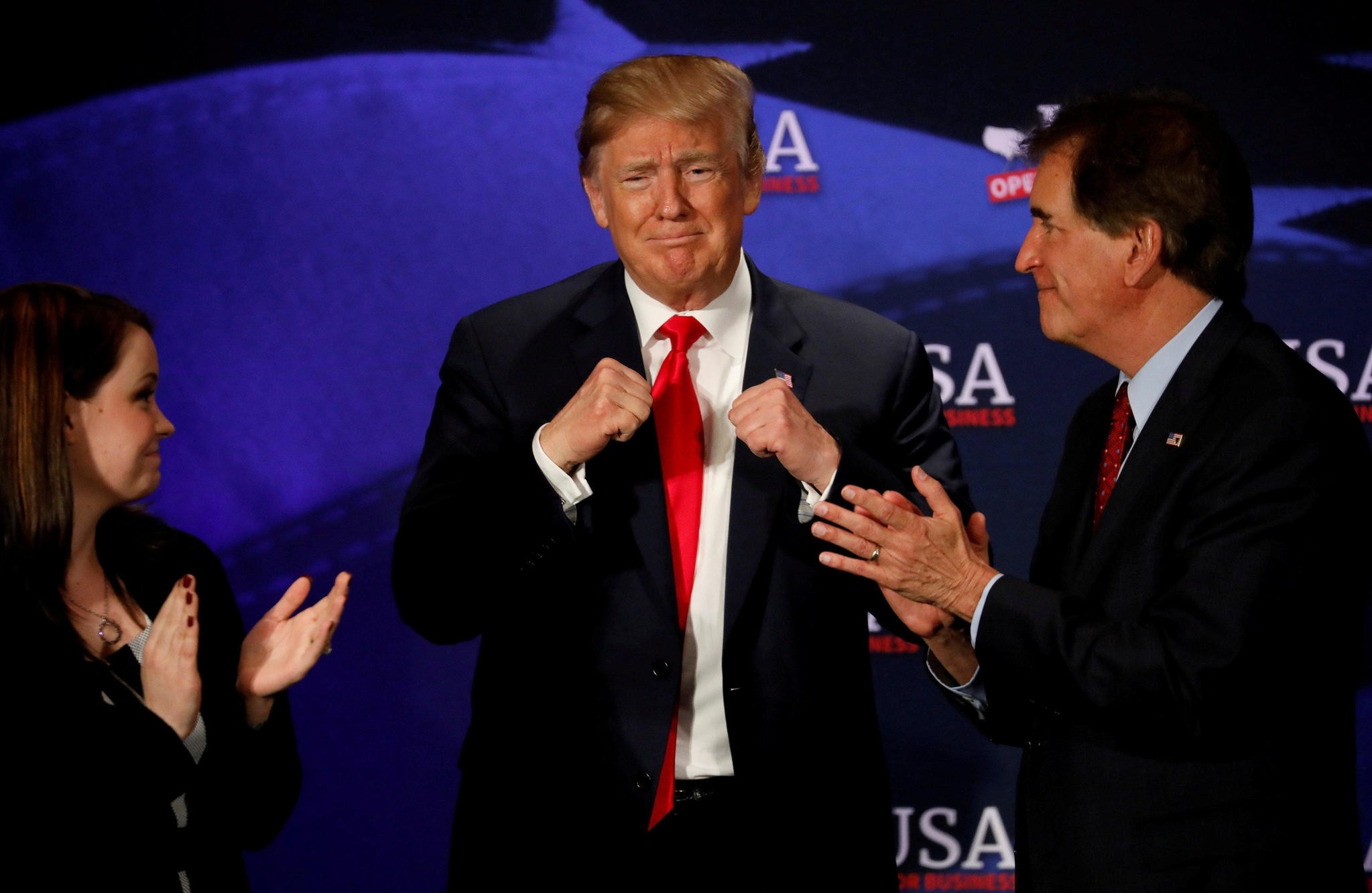 President Donald Trump attends a roundtable discussion on tax reform at the Cleveland Public Auditorium in Cleveland, Ohio, U.S., May 5, 2018. (REUTERS Photo)
by Associated Press May 06, 2018 12:00 am

U.S. President Donald Trump's new attorney, Rudy Giuliani, won't rule out the possibility that the president would assert his Fifth Amendment right against self-incrimination in the swirling Russia investigation.

"How could I ever be confident of that?" the former New York City mayor and U.S. attorney said Sunday on ABC's "This Week."

Giuliani said despite Trump's openness to sit down with special counsel Robert Mueller, he would strongly advise Trump against it.

"I'm going to walk him into a prosecution for perjury like Martha Stewart?" Giuliani said. Stewart, the lifestyle maven, was convicted in 2004 of lying to investigators and obstruction in an insider trading case.

Giuliani suggested that Trump wouldn't necessarily comply with a subpoena from Mueller, but he wouldn't rule out the possibility of the president sitting for an interview with Mueller.

"He's the president of the United States," Giuliani said. "We can assert the same privileges other presidents have."

During a 2016 campaign rally, Trump disparaged staffers of his Democratic opponent, Hillary Clinton, for asserting their constitutional right against self-incrimination during a congressional investigation into Clinton's use of a private email server.

A subpoena fight would likely find its way to the Supreme Court, which has never firmly decided whether presidents can be compelled to speak under oath.

During Watergate, the court ruled that a president could be compelled to comply with a subpoena for tapes and documents. And President Bill Clinton sat voluntarily with independent prosecutor Ken Starr after being issued a subpoena to discuss his relationship with former White House intern Monica Lewinsky, avoiding the constitutional question.

Giuliani's latest interview comes after days of conflicting statements about the investigations into the president.

Giuliani, who was hired by Trump last month, said he's still learning the facts of the Mueller case and the details of Trump's knowledge of a $130,000 hush payment to adult-film actress Stormy Daniels, who has alleged a sexual tryst with Trump in 2006. The payment was made by Trump personal attorney Michael Cohen days before the 2016 election.

When Trump was asked last month aboard Air Force One if he knew about the payment to Stormy Daniels, he said no.

But Giuliani revealed last week that Trump had reimbursed Cohen for that payment and other unspecified items.

Giuliani said he first made Trump aware of the payment shortly after joining the case but now says he doesn't know when Trump knew about it. Trump said Saturday that Giuliani needed to "get his facts straight" but insisted they weren't changing their story.

Kellyanne Conway, a counselor to the president, said Sunday on CNN's "State of the Union" that Trump on Air Force One meant that he didn't know about the payment at the time it was made, not at the time the question was asked.

Cohen is no longer representing Trump, Giuliani said, saying it would "be a conflict right now."

Michael Avenatti, Daniels' attorney, said Sunday on ABC's "This Week" that he thinks it's "obvious ... to the American people that this is a cover-up, that they are making it up as they go along. They don't know what to say because they've lost track of the truth."

Legal experts have said the revelation that Trump reimbursed Cohen raised new questions, including whether the money represented repayment of an undisclosed loan or could be seen as reimbursement for a campaign expenditure. Either could be legally problematic.

Trump tweeted last week: "Mr. Cohen, an attorney, received a monthly retainer, not from the campaign and having nothing to do with the campaign, from which he entered into, through reimbursement, a private contract between two parties." He called Daniels' allegations of an affair "false and extortionist."

Neither the payment nor the liability to Cohen was disclosed on the Trump campaign or the president's financial disclosures.

Giuliani maintained Sunday that the payment can't be considered an in-kind campaign contribution because there was another explanation for it.

"This was for another purpose, to protect him, to protect his family," he said. "It may have involved the campaign. Doesn't matter."

He added that the financial arrangement with Cohen wasn't revealed on Trump's 2017 personal financial disclosure because "it isn't a liability, it's an expense." Giuliani also didn't rule out Cohen making similar payments to other women on the president's behalf.

Cohen, who acted as Trump's "fixer," is facing a criminal investigation in New York, and FBI agents raided his home and office several weeks ago seeking records about the Daniels nondisclosure agreement.