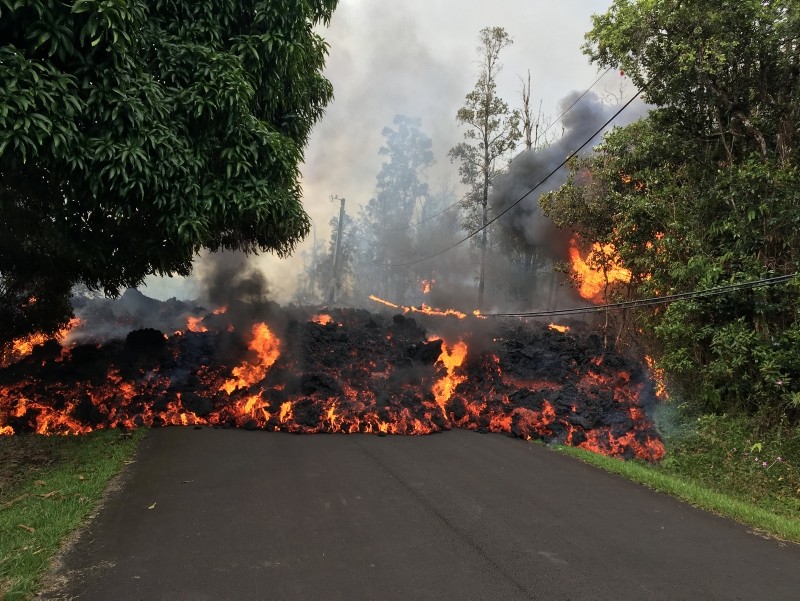 Around 1,700 people have already been ordered to leave their homes after lava crept into neighborhoods and deadly volcanic gases belched up through cracks in the earth.

The evacuation zone could now grow as fissures are spreading into new areas on the eastern side of the Big Island, Hawaii Civic Defense Administrator Talmadge Magno told a community meeting

"If things get dicey, you got to get out," he said. "If you live in the surrounding communities ... be prepared. Evacuation could come at any time."

Kilaueax has opened 12 volcanic vents since it started sending out fountains and rivers of lava on Thursday, officials said. Lava was not flowing from any of the vents on Monday.

Resident Heide Austin said she left her home just west of the current eruption zone after noticing small cracks appearing at the end of her driveway.

One eruption near her home "sounded like a huge blowtorch going off," said the 77-year-old who lives alone. "That's when I really got into a frenzy."

Many of the evacuated people were permitted to return home during daylight hours on Sunday and Monday, during a lull in seismic activity.

Residents of a second area, Lanipuna Gardens, were barred from returning home on Monday due to deadly volcanic gases.

Leilani Estates, about 12 miles (19 km) from the volcano, was evacuated due to the risk of sulfur dioxide gas, which can be life-threatening at high levels.

No deaths or major injuries have been reported. At least 35 structures had been destroyed, many of them homes, officials said.

The southeast corner of the island was rocked by a powerful magnitude 6.9 earthquake on the volcano's south flank on Friday. More earthquakes and eruptions have been forecast.

Kilauea, one of the world's most active volcanoes, has been in constant eruption for 35 years.