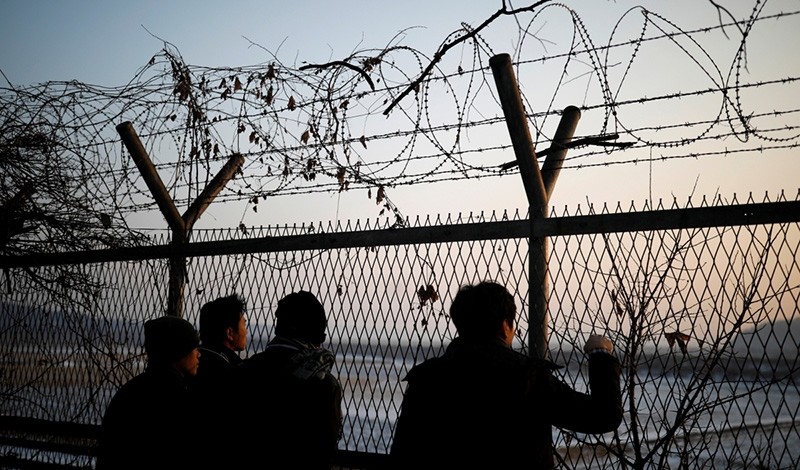 People look toward the north through a barbed-wire fence near the demilitarized zone separating the two Koreas, in Paju, South Korea. (Reuters Photo)
by Compiled from Wire Services May 09, 2018 12:00 am

U.S. President Donald Trump said on Wednesday he will announce the site for a summit with North Korean leader Kim Jong Un within three days and it will not be held at the demilitarized zone along the border between the two Koreas.

"It will not be there," he told reporters at the White House when asked if the planned meeting would be at the DMZ. "We're going to announce it within three days."

The U.S. president previously said he was interested in holding the historic meeting on the heavily fortified border separating North and South Korea. He said the DMZ was appealing "because you're there" and any celebration would be memorable if the talks proved successful.

Kim hailed the planned meeting with Trump as a "historic" opportunity during talks with America's top diplomat Mike Pompeo in Pyongyang, according to state media Thursday.

Kim said his summit with Trump "would be a historic meeting" and an "excellent first step."

He said it would help toward improving the situation on the Korean peninsula and the "building of a good future," in comments published on North Korea's official KCNA news agency.

Trump also hailed Wednesday the release of three Americans detained in North Korea as they make their way back home.

Kicking off a Cabinet meeting at the White House, Trump said that he "appreciates" Kim's decision to release the detainees ahead of the leaders' planned summit.

He said he's looking forward to the meeting and believes it's going to be a great thing for North Korea.

Kim said he accepted a U.S. suggestion to release to American detainees and gave them amnesty, state media said Thursday.

Trump broke the news on Twitter earlier Wednesday that the detainees were on their way back to the U.S. with Secretary of State Pompeo.

Trump said he would be greeting them at Andrews Air Force Base at 2 a.m. Thursday.

He says of the arrival: "I think it will be a very special time."

The U.S.-North Korea meeting is expected to be held in late May or early June.

A number of other countries have also been considered, including Singapore.