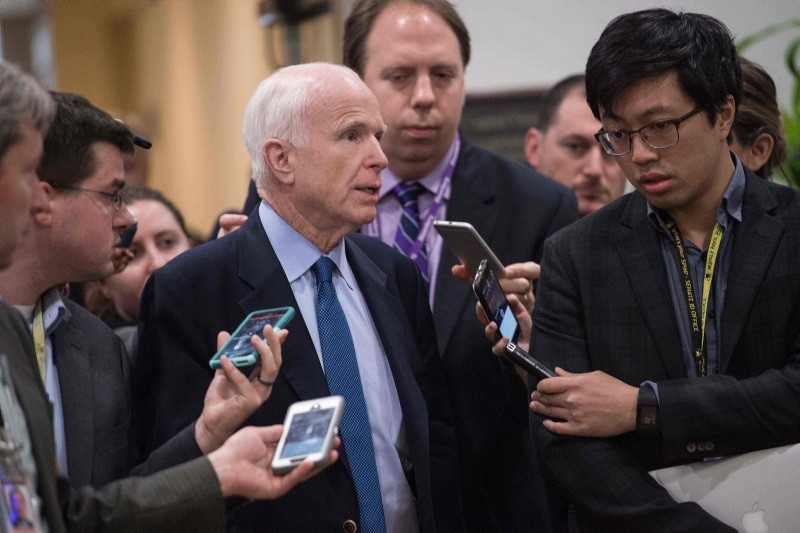 In this file photo taken on April 7, 2017 US Republican Senator from Arizona John McCain speaks to reporters after a closed briefing by Joint Chiefs of Staff Gen. Joseph Dunford at the Capitol in Washington, DC. (AFP Photo)
by Compiled from Wire Services May 11, 2018 12:00 am

Kelly Sadler, a special assistant in the White House communications office, made the comments at a closed-door meeting attended by about two dozen staffers, The Hill newspaper said. The Washington Post also reported Sadler's remarks.

The White House did not dispute the remark. In a statement, they said, "We respect Senator McCain's service to our nation and he and his family are in our prayers during this difficult time."

The 81-year-old Arizona Republican, who has spent three decades in the Senate, was diagnosed in July with glioblastoma, an aggressive brain cancer. He left Washington in December and underwent surgery last month for an infection.

Sadler is a special assistant to the president. She did not respond to a request for comment Thursday evening.

McCain's wife, Cindy McCain, responded in a tweet. "May I remind you my husband has a family, 7 children and 5 grandchildren," she said.

John McCain has been a frequent critic of Trump. In a memoir due to be released later this month, McCain accuses fellow Republican Trump of failing to uphold American values.

Sen. McCain, a Navy pilot who was beaten in captivity during the Vietnam War, has urged his fellow senators to reject Haspel. He said Wednesday that he believes she's a patriot who loves the country but "her refusal to acknowledge torture's immorality is disqualifying."

Haspel faced grilling Wednesday by the Senate Intelligence Committee about her role overseeing some CIA operations after the Sept. 11 attacks. She told senators that she doesn't believe torture works as an interrogation technique.

South Carolina Republican Senator Lindsey Graham, a close friend of John McCain, told CNN of the White House aide's comment, "Ms. Sadler, may I remind you that John McCain has a lot of friends in the United States Senate on both sides of the aisle. Nobody is laughing in the Senate."