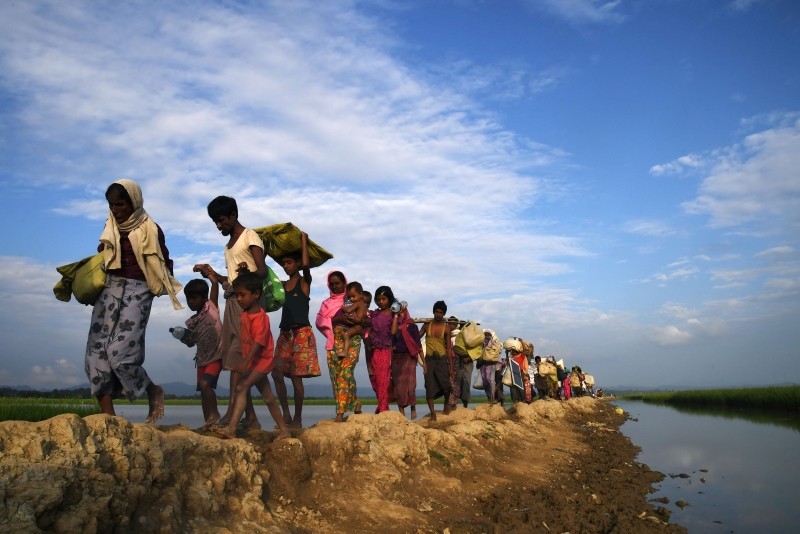 In this file photo taken on November 2, 2017, Rohingya Muslim refugees who were stranded after leaving Myanmar walk towards the Balukhali refugee camp after crossing the border in Bangladesh's Ukhia district. (AFP Photo)
by French Press Agency - AFP May 23, 2018 12:00 am

Canada on Wednesday said it stands ready to take in Rohingya refugees, pledged significant aid and called for the prosecution of those behind human rights atrocities in Myanmar.

Foreign Minister Chrystia Freeland told a news conference the asylum offer did not exclude the possibility of the Rohingya returning home, as most have said they wish for.

But the current situation in Myanmar is not conducive to their safe return, she said.

About 700,000 members of the Rohingya Muslim minority fled to Bangladesh, where they stay in refugee camps, after Myanmar's military last August launched a military operation in Rakhine state.

The violence has left a trail of torched villages in its wake, with allegations of murder and rape at the hands of troops and vigilantes.

Myanmar has vehemently denied US and United Nations allegations of ethnic cleansing in the Buddhist-majority country.

"The Rohingya have a right to return to their homes. But the conditions for their return currently do not exist," Freeland said. "Persecution is still happening."

The minister declined to outline when or how many refugees might be taken in, saying it will be up to the UN refugee agency to coordinate the resettlement.

Flanked by International Development Minister Marie-Claude Bibeau, she said Canada will work with other countries and the UN to come up with a plan.

Myanmar and Bangladesh had agreed in November to begin repatriating Rohingya refugees to Myanmar but the process has stalled, with both sides blaming each other for the delays.

Freeland said Ottawa will also work with the International Criminal Court to make sure there are prosecutions of those responsible for rights abuses and violations in Myanmar, which she called "ethnic cleansing" and "crimes against humanity."

"It is important for the people responsible for this atrocity to understand that they will face justice, that the world community is watching... that there ultimately will be no place to hide," she said.

Canada's pledge of Can$300 million (US$233 million) in aid over three years is on top of the Can$45.9 million in emergency assistance already provided since the start of 2017.

According to a statement, it will go to improve living conditions for Rohingya refugees in camps and settlements, help mitigate the impact on their host Bangladesh and support other conflict-affected populations in Myanmar.