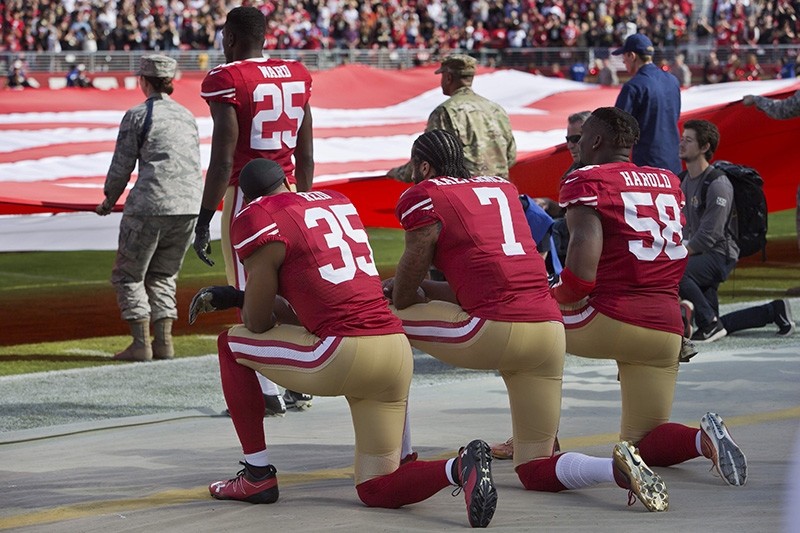 In this file photo taken Nov. 6, 2016 Quarterback Colin Kaepernick #7, safety Eric Reid #35, and linebacker Eli Harold #58 of the San Francisco 49ers kneel before a game against the New Orleans Saints in Santa Clara, California. (AFP Photo)
by Daily Sabah with Agencies
May 25, 2018 12:00 am

As the U.S. National Football League (NFL) this week approved a new policy to fine and punish any player who kneels during the national anthem, police violence against black Americans continues to merit shame.

Kaepernick lost his job over the action, but sparked a movement of silent protest among NFL players that infuriated league leadership and national politicians, most notably U.S. President Donald Trump.

In one such incident earlier this year, California police shot unarmed 22-year-old Stephon Clark 20 times in his own backyard.

Some police departments have ordered all officers to wear bodycams to monitor their on-duty actions, but even that doesn't seem to have curbed unwarranted use of force.

In a disturbing bodycam video that was made public this week, Milwaukee police were seen ganging up on professional basketball player Sterling Brown over a traffic violation, eventually tazing him before recognizing the NBA guard and apologizing.

Brown, 23, was initially detained in January by one officer for parking in a handicapped zone. He was then held while the officer waited for "backup."

When six other officers arrived on the scene, they surrounded him and yelled: "Take your hands out of your pockets now!" Brown responded: "No. I got stuff in my hands."

At that point, officers tackled Brown to the ground, tazed and handcuffed him.

Brown said in a statement Wednesday: "Situations like mine and worse happen every day in the black community. The common denominator in all of these situations has been racism toward the minority community, the abuse of power, and the lack of accountability for officers involved."

While videos like Brown's, and worse ones involving fatalities, have moved many to demand accountability, other Americans remain on the opposite pole of the argument.

Trump said in an interview this week that NFL players who kneel during the national anthem "shouldn't be in the country."

Trump later retweeted a tweet by Vice President Mike Pence, who walked out on an NFL game in Indianapolis after some players kneeled for the anthem.

Pence tweeted a headline of the NFL announcement Wednesday under the hashtag "Winning" and an American flag.

The new NFL policy removes a requirement that all players be on the field for the anthem, allowing players who do not wish to stand to remain in the locker room. All NFL players, however, who are on the field are required to stand. Teams would be fined for violations.

Denver Broncos linebacker Brandon Marshall, who knelt during the anthem before several games during the 2016 season and once last season, called Trump's words "disgusting."

"I say disgusting because of our First Amendment rights,'' he said.

"We've got freedom of speech, right? Freedom to protest? Just because somebody chooses to protest, now we've got to be kicked out of the country? That's not how things should work, in my opinion," Marshall said.

Last year, Trump described players who went down on one knee during the anthem as "sons of bitches" who were insulting the flag and the nation.

The remarks prompted a wave of protests across the league in September, angering some fans and placing several conservative, Trump-supporting team owners in an awkward position as NFL television ratings dropped.