499 civilians killed by US military in Trump’s first year in office: Pentagon 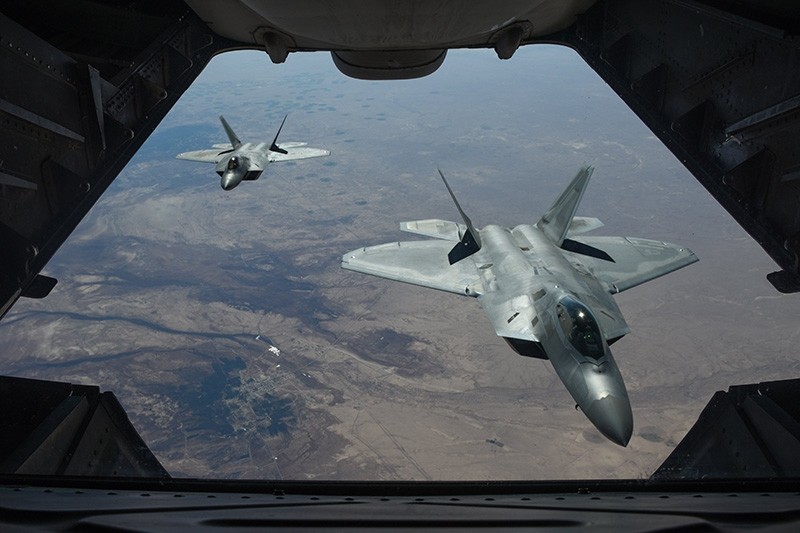 A handout photo made available by the U.S. Department of Defense shows two US Air Force F-22 Raptors flying above Syria in support of Operation Inherent Resolve, Feb. 2, 2018. (EPA Photo)
by Daily Sabah Jun 01, 2018 12:00 am

The counter-terrorism report said the DoD had "no credible reports" of civilian casualties due to U.S. military actions in Libya or Somalia in 2017.

However, "more than 450 reports of civilian casualties from 2017 remained to be assessed," the report added, indicating the casualty count could increase.

The report includes civilian casualties in both ground combat operations and airstrikes.

"Despite the best efforts of U.S. forces, civilian casualties are a tragic but at times unavoidable consequence of combat operations," the Pentagon said, attributing the casualties to the use of human shields and other endangering tactics by Daesh and al-Qaeda in urban areas.

The report was delivered under a mandate signed into effect by executive order by then-President Barack Obama in 2016.

The order mandated "an annual summary" including terrorist and civilian casualties as well as "the number of strikes undertaken by the U.S. Government against terrorist targets" in areas outside active conflict sites.

Though Obama's order specified the report would be made public "annually on May 1," the Trump administration missed the deadline, drawing criticism from human rights groups.

On Thursday, the U.S.-led coalition combating Daesh in Iraq and Syria reported "at least 892 civilians have been unintentionally killed" in 29,358 coalition strikes from August 2014 through the end of April 2018.

However, outside groups put the number of civilians killed much higher than the coalition's count.

While the DoD acknowledged the discrepancies, it attributed them to "different types of information and different methodologies to assess whether civilian casualties have occurred."