At least 62 killed in volcanic eruption in Guatemala 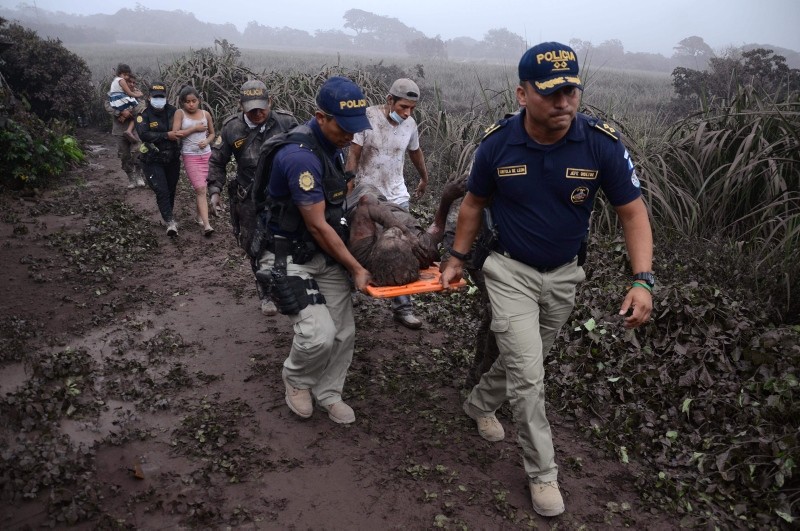 Police officers carry a wounded man after the eruption of the Fuego Volcano, in El Rodeo village, Escuintla department, 35 km south of Guatemala City on June 3, 2018 (AFP Photo)
by Compiled from Wire Services Jun 04, 2018 12:00 am

Rescuers pulled survivors and bodies Monday from the charred aftermath of the powerful eruption of Guatemala's Volcano of Fire, as the death toll rose to 62 and was expected to go higher from a disaster that caught residents of remote mountain hamlets off guard, with little or no time to flee to safety.

Using shovels and backhoes, emergency workers dug through the debris and mud, perilous labor on smoldering terrain still hot enough to melt shoe soles a day after the volcano exploded in a hail of ash, smoke and molten rock.

Bodies were so thickly coated with ash that they looked like statues, and rescuers were forced to use sledgehammers to break through the roofs of houses buried in debris up to their rooflines to try to see if anyone was trapped inside.

Fanuel Garcia, director of the National Institute of Forensic Sciences, said 62 bodies had been recovered and 13 of those had been identified.

"It is very difficult for us to identify them because some of the dead lost their features or their fingerprints" from the red-hot flows, Garcia said. "We are going to have to resort to other methods ... and if possible take DNA samples to identify them."

Hilda Lopez said her mother and sister were still missing after the slurry of hot gas, ash and rock roared into her village of San Miguel Los Lotes, just below the mountain's flanks.

"We were at a party, celebrating the birth of a baby, when one of the neighbors shouted at us to come out and see the lava that was coming," the distraught woman said. "We didn't believe it, and when we went out the hot mud was already coming down the street."

"My mother was stuck there, she couldn't get out," said Lopez, weeping and holding her face in her hands.

Her husband, Joel Gonzalez, said his father had also been unable to escape and was believed to be "buried back there, at the house."

Guatemalan authorities say they had been closely monitoring the Volcano of Fire, one of Central America's most active, after activity picked up around 6 a.m. Sunday.

Drone captures the destruction caused by the eruption of Guatemala's Fuego volcano as the death toll climbs to 33 after rescue workers recover more and more bodies https://t.co/IvqI78RSii pic.twitter.com/H9RuaFuZvY

The volcano has registered a number of minor eruptions over the years, and no evacuations were ordered as scientific experts reported the activity was decreasing.

Guatemala's disaster agency, Conred, issued a number of standard precautions, advising people to wear protective face masks, clean their rooftops of ash once the eruption was over and cover any food and water intended for human consumption. It also said to heed any recommendations from authorities. Guatemala City's international airport was closed due to the danger to planes.

Soon, searing flows of lava, ash and rock mixed with water and debris were gushing down the volcano's flanks, blocking roads and burning homes.

"It traveled much faster. It arrived in communities right when the evacuation alerts were being sent out," de Leon said.

Authorities scrambled to issue an evacuation order. Some communities emptied out safely. But in places like Los Lotes and the village of El Rodeo, about eight miles (12 kilometers) downslope from the crater, it was too late for many.

The fast-moving flows overtook people in homes and streets with temperatures reaching as high as 1,300 degrees Fahrenheit (700 Celsius), and hot ash and volcanic gases that can cause rapid asphyxiation.

"When the lava was already here they passed by in their pickup trucks yelling at us to leave, but the cars did not stop to pick up the people," Letran said. "The government is good at stealing, but when it comes to helping people they lack spark."

"As soon as we received the information around 6 a.m. that the volcano was in an eruptive phase, the protocol was initiated to verify with different sectors and also talk to the communities, to community leaders. ... We had the information from our scientific service, and they told us the trend was that the activity was diminishing," he said.

In El Rodeo on Monday, heavily armed soldiers wearing blue masks to avoid breathing in ash stood guard behind yellow tape cordoning off the disaster scene. Helmeted workers carried bodies away on stretchers, and smoke was still rising from some parts of the ashen landscape strewn with boulders and other debris.

Emergency crews in helicopters managed to pull at least 10 people alive from areas cut off by the flows. Conred said 3,265 people had been evacuated.

President Morales announced a red alert for Escuintla, Chimaltenango and Sacatepequez, the areas most affected by the eruption, and an orange alert throughout the country.

The president said he and his government would determine whether to ask Congress to declare a state of emergency in the areas, while at the same time appealing to the population for calm.

Hundreds of personnel from the police, Red Cross and military have been dispatched to support emergency operations, Morales said.

Cabanas said that the dead included a civil protection official.

The eruption is the second major one this year from the peak, following another that subsided at the beginning of February after sending ash towering 1.7 kilometers into the sky.

A September 2012 eruption of the volcano saw 10,000 people evacuated, while another in February 2015 forced the closure of the capital's main airport.

Apart from the Fuego volcano, there are two other active volcanoes in Guatemala. One of them, Pacaya, is just 20 kilometers from Guatemala City.