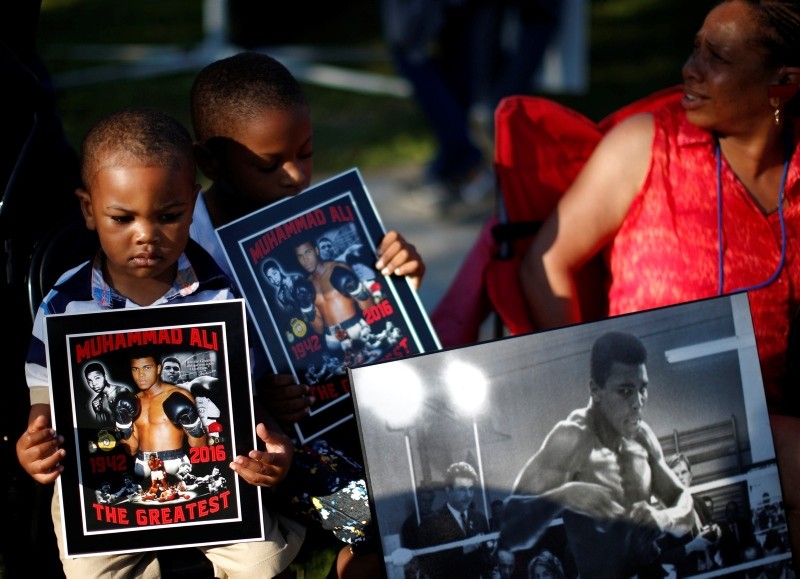 Brandon Liggons, 2, (L) holds an image of Muhammad Ali during the funeral procession for the three-time heavyweight boxing champion in Louisville, Kentucky, U.S., June 10, 2016. (Reuters Photo)
by Compiled from Wire Services Jun 08, 2018 12:00 am

U.S. President Donald Trump said on Friday he is considering pardoning some 3,000 people "who may have been treated unfairly," including late heavyweight boxing champion Muhammad Ali.

"We have 3,000 names. We're looking at them. Of the 3,000 names, many of those names have been treated unfairly," Trump told reporters on the White House lawn before he departed for a Group of Seven summit in Canada. In some cases, their sentences are "far too long," he said.

Trump said he was considering a pardon for Ali, who died in 2016. The boxer refused to be inducted into the U.S. Army in 1967, claiming conscientious objector status, and was sentenced to five years in prison. He never went to prison while his case was under appeal and in 1971 the U.S. Supreme Court overturned the conviction.

It was unclear why Trump would be considering a pardon, given that Ali's conviction was overturned.

The White House did not immediately respond to questions about why the president feels one is warranted.

Ali was born Cassius Clay, and changed his name after converting to Islam in the 1960s. He refused to serve in the Vietnam War because of his religious beliefs, declaring himself a conscientious objector, and saying, "I ain't got no quarrel with the Viet Cong."

Trump has been on a clemency kick, and earlier this week commuted the life sentence of a woman whose cause was championed by reality television star Kim Kardashian West.

Last month he granted a posthumous pardon to boxing's first black heavyweight champion, Jack Johnson, more than 100 years after many saw as his racially charged conviction. Johnson was convicted in 1913 by an all-white jury of violating the Mann Act for traveling with his white girlfriend. That law made it illegal to transport women across state lines for "immoral" purposes.

The president has said he's considering commuting the sentence of former Illinois Gov. Rod Blagojevich, who is serving 14 years in prison for corruption, and pardoning celebrity homemaker Martha Stewart, who served about five months on charges connected to an insider trading case.

"The power to pardon," said Trump, "is a beautiful thing."

In his first use of that power, Trump spared a former Arizona sheriff, Joe Arpaio, the prospect of serving jail time after a conviction stemming from his use of immigration patrols that focused on Latinos.

Last year, the president commuted the sentence of an Iowa kosher meatpacking executive who had been sentenced to 27 years in prison for money laundering. In March, he pardoned a U.S. Navy sailor who served a year in federal prison after taking photos of classified portions of a submarine.

In April, he issued a full pardon in April to I. Lewis "Scooter" Libby, a former top aide to Vice President Dick Cheney who was convicted of lying to investigators and obstruction of justice following the 2003 leak of the covert identity of CIA officer Valerie Plame.

And Trump recently pardoned conservative commentator Dinesh D'Souza, who was convicted of a campaign finance violation.