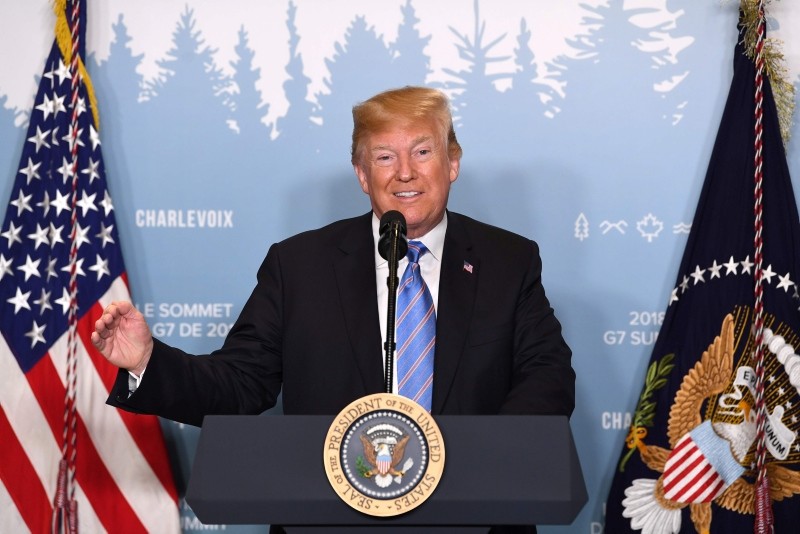 U.S. President Donald Trump said Saturday he has "a clear objective" for his upcoming nuclear summit with North Korea's Kim Jong Un, though he acknowledged that potential progress "will always be spur of the moment."

He described the meeting scheduled for Tuesday in Singapore as a "one-time shot" for Kim, and Trump said he was about to undertake a "mission of peace" as he left the Group of Seven meeting with world leaders in Canada.

The president told reporters that it's "so far, so good" as he headed into what he called "unknown territory in the truest sense." He said he thinks "it's going to work out very well."

Trump, who prides himself on his deal-making prowess, said he thinks he will know 'within the first minute" of meeting Kim whether the North Korean leader is serious about the nuclear negotiations.

"I think I'll know pretty quickly whether or not, in my opinion, something positive will happen. And if I think it won't happen, I'm not going to waste my time. I don't want to waste his time," Trump said.

It will be the first time that a sitting U.S. president and a North Korean leader have met.

Trump cited the unprecedented nature of the meeting and said he was convinced that Kim wants to do good things for his country.

"He could take that nation with those great people and truly make it great, so it's a one-time, it's a one-time shot, and I think it's going to work out very well," Trump said. "That's why I feel positive, because it makes so much sense."

He also praised the North Koreans, saying they have been "really working very well with us" during preparations for the summit.

"So far, so good. We're going to have to see what happens. I very much look forward to it," he said.

Trump hopes to persuade Kim to completely abandon the arsenal of nuclear weapons and ballistic missiles that the North Koreans have spent more than a generation amassing.

"I have a clear objective, but I have to say that it's going to be something that will always be spur of the moment. This has not been done before at this level. This is a leader who really is an unknown personality. People don't know much about him. I think that he's going to surprise on the upside, very much on the upside," Trump said.