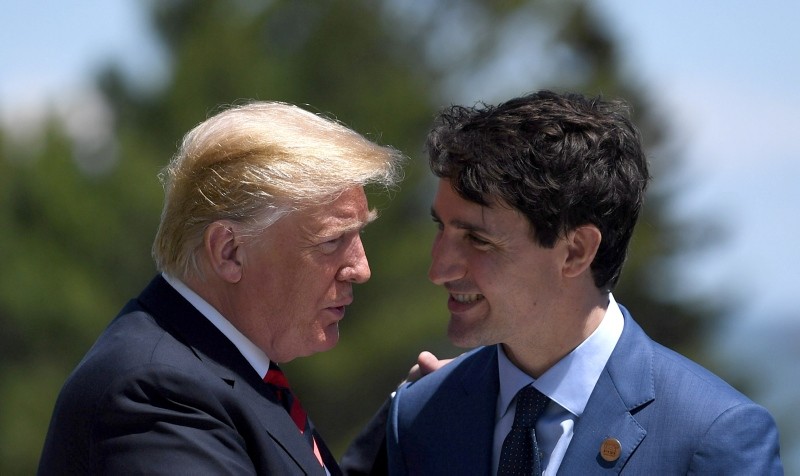 President Donald Trump said Canadian Prime Minister Justin Trudeau "learned" from the mistake of criticizing him and it's going to cost Canada "a lot of money."

Trump adviser Peter Navarro, meanwhile, said Tuesday he made a mistake when he said "there's a special place in hell" for Trudeau.

At a news conference Tuesday after his summit with North Korean leader Kim Jong Un, Trump recounted his recent tough exchanges with Trudeau. He said the Canadian leader must not have realized that Trump had televisions on Air Force One, allowing him to monitor Trudeau's news conference at the end of the G-7 summit.

The president said he was annoyed by Trudeau's comments about not letting Canada get pushed around.

"He's giving a news conference about how he will not be pushed around by the United States. And I say, push him around? We just shook hands. It was very friendly," Trump said.

Trump called Trudeau "dishonest" and "weak" in tweets following the summit on Saturday.

Trump advisers also took up the attack in appearances on Sunday's news shows, leveling more withering and unprecedented criticism against Trudeau, branding him a back-stabber unworthy of Trump's time. "There's a special place in hell for any foreign leader that engages in bad faith diplomacy with President Donald J. Trump and then tries to stab him in the back on the way out the door," Navarro said on "Fox News Sunday."

Navarro seemed to apologize for the remarks on Tuesday.

"Let me correct a mistake I made," Navarro said at a Wall Street Journal conference Tuesday, according to video provided by the newspaper's CFO Network. "In conveying that message I used language that was inappropriate."

When asked about Trump's remarks in Parliament on Tuesday, Trudeau said he supports Trump's efforts on North Korea and looks forward to the details of that agreement.

"On his comments, I'm going to stay focused on defending jobs for Canadians and supporting Canadian interests," Trudeau said before walking away from reporters.

A Trump adviser had suggested Sunday that Trump saw Trudeau as trying to weaken his hand before the meeting with Kim.

The president also discussed in Singapore the viral photo taken of German Chancellor Angela Merkel and others standing before him. Trump said it was snapped as they waited for changes he'd requested to the communique, which he ended up pulling out of.

Trump said it "didn't look friendly" but it was "very friendly."