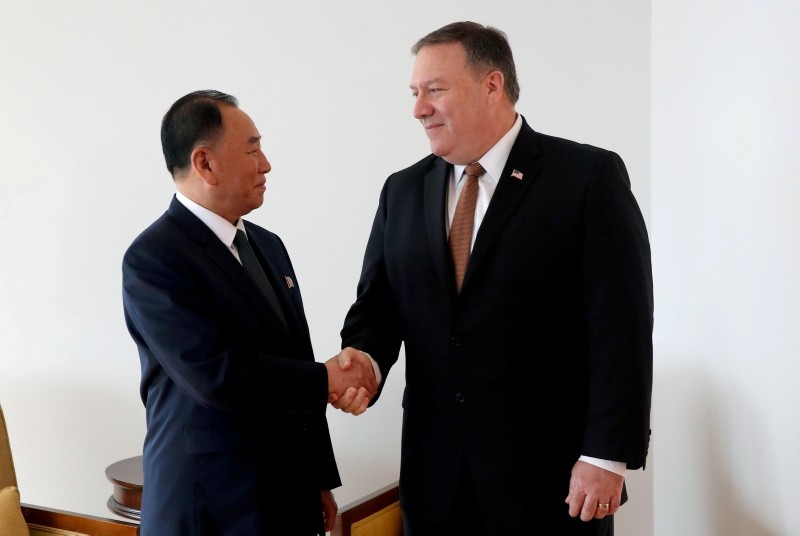 Speaking the day after an unprecedented summit between Trump and North Korean leader Kim Jong Un, Pompeo told reporters in Seoul negotiations on Pyongyang's atomic arsenal could move forward quickly and would take place "most certainly in the president's first term".

"Major disarmament... We're hopeful that we can achieve that in the two and half years," he said, adding that there is "a lot of work left to do".

At the first-ever meeting between sitting leaders of the U.S. and North Korea on Tuesday in Singapore, Trump and Kim pledged in a joint statement to work toward the "complete denuclearization of the Korean Peninsula".

However this stock phrase, favored by Pyongyang, stopped short of longstanding U.S. demands for North Korea to give up its atomic arsenal in a "verifiable" and "irreversible" way.

When questioned on the wording of the statement, Pompeo said Wednesday that Trump's intention was to allow the U.S. the opportunity to pursue further productive conversations on the issue with Pyongyang.

"Let me assure you that 'complete' encompasses verifiable in the minds of everyone concerned. One can't completely denuclearize without validating, authenticating," he said.

Critics have said the encounter between Trump and Kim was more style than substance, producing a document short on details about the key issue of the North's atomic weapons.

In his post-summit press conference, Trump made the surprise announcement that the U.S. would halt joint military exercises with its security ally Seoul -- a concession Pyongyang has sought for decades.

The U.S. stations 28,500 troops in South Korea to help protect it from its northern neighbor, which invaded in 1950 to try to reunify the peninsula by force.

The announcement appeared to take both the South Koreans -- and even top officials in the Pentagon -- by surprise, especially since Trump embraced Pyongyang's rhetoric in calling the drills "provocative".

At his press conference in the South Korean capital Pompeo defended Trump's stance, saying the joint drills could be brought back if negotiations with the North deteriorated.

"He (Trump) made it very clear that the condition precedent for the exercises not to proceed was a productive, good faith negotiations being ongoing," Pompeo told reporters.

Pompeo also said he anticipates the U.S. would next speak to North Korean officials "fairly quickly after we return to our home countries", adding that he was "very confident" that some form of engagement between the two sides would take place in the next week.

Tokyo has expressed some concern about the cancellation of military exercises.