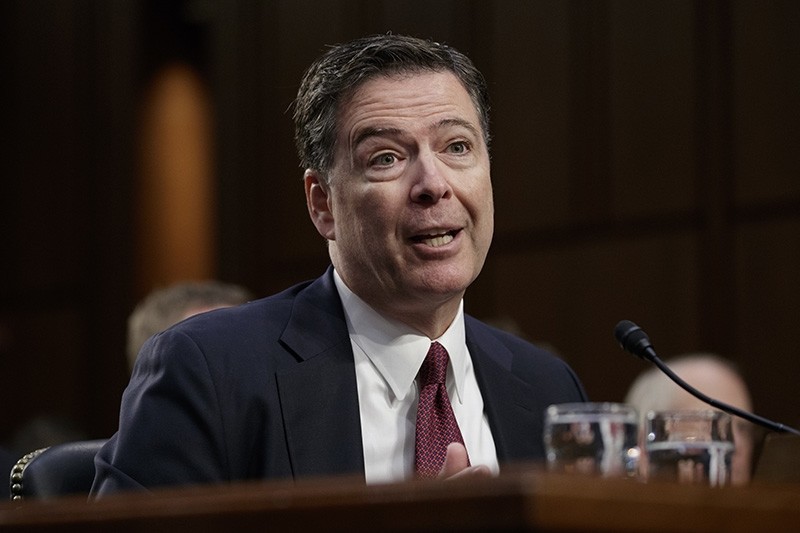 Former FBI director James Comey recounts a series of conversations with President Donald Trump as he testifies before the Senate Select Committee on Intelligence, on Capitol Hill in Washington, Thursday, June 8, 2017. (AP Photo)
by Daily Sabah with Agencies Jun 14, 2018 12:00 am

The Justice Department has issued a stinging rebuke to the FBI for its handling of the Hillary Clinton email investigation.

But the 500-page report by Inspector General Michael Horowitz concluded that Comey did not exhibit any political bias or try to influence the election.

However, it criticized him for violating Justice Department policies and accused him of usurping the authority of Attorney General Loretta Lynch when in July 2016 he announced there would be no charges against Clinton for her email use as secretary of state.

It also faulted his "serious error of judgment" in alerting Congress days before the 2016 election that the investigation was being reopened because of newly discovered emails.

In addition, the report was highly critical of Peter Strzok and Lisa Page, two FBI staff members who exchanged highly charged political messages, finding their texts cast a cloud over the FBI and created the appearance of bias.

Comey responded to the report by saying he disagrees with watchdog's conclusion but respects its work.

White House spokeswoman Sarah Huckabee Sanders said the inspector general's report is also reaffirming Trump's suspicions about the "political bias among some of the members of the FBI." She deferred additional comments to FBI Director Christopher Wray.

President Trump has looked to the report to provide a fresh line of attack against Comey and his deputy, Andrew McCabe, as he claims that a politically tainted bureau tried to undermine his campaign and, through the later Russia investigation, his presidency. Trump is certain to try to use the report to validate his firing of Comey last year.

But the nuanced findings provide no conclusions to support Republicans and Democrats who want to claim total vindication.

The report documents in painstaking detail one of the most consequential investigations in modern FBI history and reveal how the FBI, which for decades has strived to stand apart from politics, came to be entangled in the 2016 presidential election.