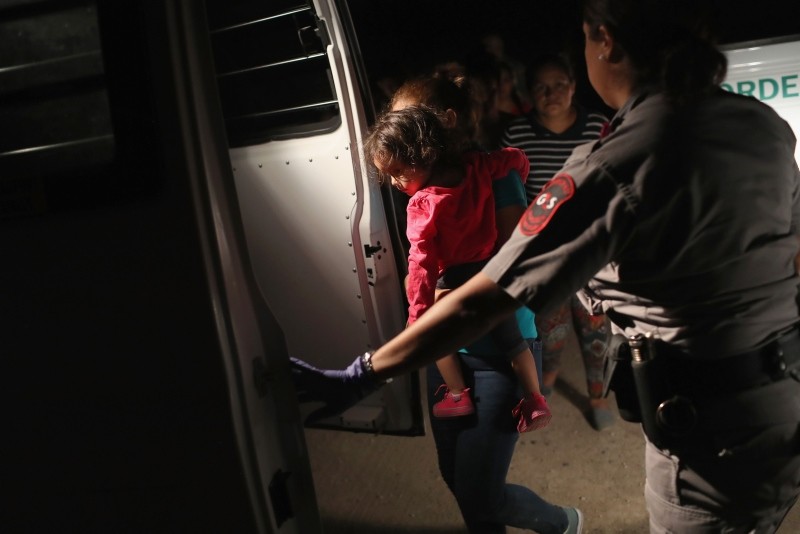 Central American asylum seekers, including a Honduran girl, 2, and her mother are taken into custody near the U.S.-Mexico border on June 12, 2018 in McAllen, Texas. (AFP Photo)
by Compiled from Wire Services Jun 17, 2018 12:00 am

Hundreds of children are waiting away from their parents inside a Border Patrol holding facility in South Texas, with groups of 20 or more children to a single cage. There are bottles of water, bags of chips, and large foil sheets intended to serve as blankets.

The U.S. Border Patrol on Sunday allowed reporters to briefly visit the facility where the agency is holding children and adults after arresting them at the border.

But Michelle Brane of the Women's Refugee Commission says she's met teenagers caring for unrelated young children because they've been separated from their adult guardians.

Nearly 2,000 children were separated from their families over a six-week period in April and May after Attorney General Jeff Sessions announced a new "zero-tolerance" policy that refers all cases of illegal entry for criminal prosecution. U.S. protocol prohibits detaining children with their parents because the children are not charged with a crime and the parents are.

The administration wants to send a message, said a Republican critic of the policy, "that if you cross the border with children, your children are going to be ripped away from you. That's traumatizing to the children who are innocent victims, and it is contrary to our values in this country."

Maine Sen. Susan Collins added that "we know from years of experience that we need to fix our immigration laws and that using children is not the answer."

Trump plans to meet with House Republicans on Tuesday to discuss pending immigration legislation amid an election-season debate over an issue that helped vault the New York real estate mogul into the Oval Office in 2016. The House is expected to vote this week on a bill pushed by conservatives that may not have enough support to pass, and a compromise measure that the White House has endorsed.