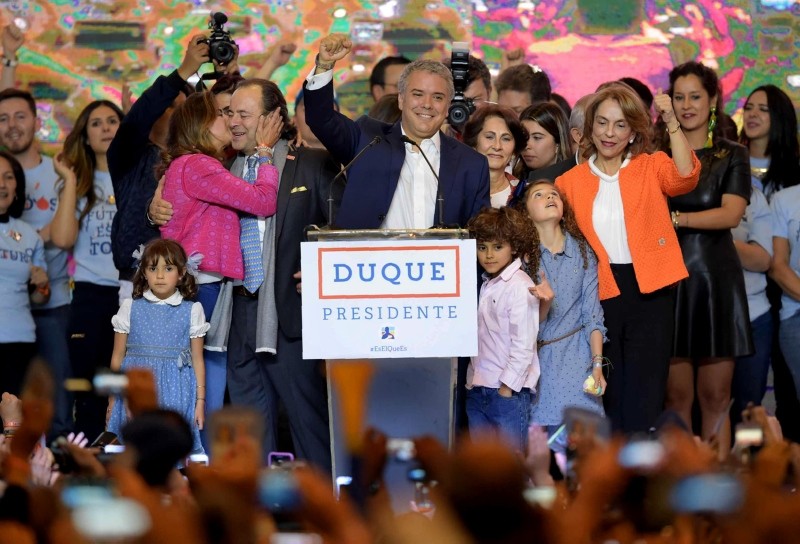 The conservative Duque, the protégé of a powerful former president, was elected Sunday with 54 percent of the vote. He finished more than 12 points ahead of former guerrilla Gustavo Petro, though the runner-up's performance at the ballot box was the best ever for the left in one of Latin America's most conservative nations.

When Duque takes office in August at age 42, he will be Colombia's youngest president in more than a century and in his first remarks as president-elect he vowed to work tirelessly to heal divisions and govern on behalf of all Colombians. He also promised a frontal attack on corruption while addressing a surge in cocaine production that he called a threat to national security.

"This is the opportunity that we have been waiting for — to turn the page on the politics of polarization, insults and venom," Duque told jubilant supporters Sunday night, joined by his young family.

The election was the first since outgoing President Juan Manuel Santos signed the 2016 peace agreement with the Revolutionary Armed Forces of Colombia (FARC) and the race ultimately ended up being defined by the divisive accord.

Duque's promise to heal the scars from five decades of bloody conflict will demand a quick response. The FARC rebels who demobilized under the accord are struggling to reinsert themselves into civilian life in a nation where many people are hesitant to forgive. Vast swaths of remote territory remain under the control of violent drug mafias and residual rebel bands.

FARC, which disarmed and transformed into a political party after the peace deal but did not contest the election, immediately called on Duque to show "good sense" in dealing with the agreement.

"What the country demands is an integral peace, which will lead us to the hoped-for reconciliation," the FARC said in a statement after Duque's presidential win. The former rebels also called for an early meeting with Duque.

"One of the big questions here is what's going to happen with the peace process," analyst Yann Basset of the University of Rosario told AFP.

"He has said he will not end the agreement, but that he will make modifications, and it's not very clear what these changes will be."

Duque, who only entered politics in 2014 after being lured back to Colombia by former President Alvaro Uribe from a cozy life in Washington, in his victory speech repeated pledges made on the campaign trail to roll back benefits in the peace accord for top rebel commanders behind atrocities.

He and running mate Marta Lucia Ramirez, who will become Colombia's first female vice president, have promised to make changes in the accord but Duque also has vowed not to "shred it to pieces" as some of his hawkish allies have urged.

"Undoubtedly, for the peace process, this is an important test," said Patricia Munoz, a professor of political science at Javeriana University in Bogota.

Petro energized young voters and drew millions to public plazas with fiery speeches vowing to improve the lives of poor Colombians long neglected by the political elite. His more than 8 million votes marked the biggest success for a leftist presidential contender ever in Colombia, where politicians on the left have long been stigmatized because of the civil conflict.

"Perhaps as time passes people will be less scared about voting for left-wing politicians," said Jorge Gallego, a professor at Bogota's Rosario University. "Although with this result, it's proven that Colombia is still a right-wing country."

Petro took his loss in stride, refusing to call it a defeat. In a concession speech that at times sounded celebratory, he challenged Duque to break with his hardline allies, and Uribe in particular. He also promised to mobilize his considerable following into a combative opposition that will fight for social reforms and defend the peace accord.

"Those eight million Colombians are not going to let Colombia return to war," Petro said to a thunderous applause from supporters chanting "Resistance!"

58-year-old Petro was the first leftist to reach a presidential runoff in Colombia, and believed his presence showed the South American country had shed its suspicions of the left, tainted by 50 years of conflict.

"The need to change things is fundamental," he said after voting.

"We are going to build a humane Colombia that is at peace, that is reconciled with itself."

A former member of the disbanded M-19 guerrilla group, Petro had promised to implement the agreement with the FARC, whose 7,000 ex-combatants have struggled to return to civilian life.

FARC leader Rodrigo Londono, known as Timochenko during the conflict, said: "With either one of the two (candidates), we cannot let down our guard."

Highlighting Colombia's glaring inequalities during his campaign, Petro also said he would buy out land owned by the big agro-industrial companies and redistribute it to poor farmers.

The FARC withdrew from the presidential elections, having suffered a drubbing in its first electoral contest as a political party in March, polling less than half a percent.

Colombia's peace process to end a conflict that caused more than 250,000 deaths is considered largely irreversible. Most of the more the rebels who have surrendered their weapons have started new lives as farmers, community leaders and journalists. Last year the rebels launched a new political party and will soon occupy 10 seats in congress as a result of the peace agreement, which is a clause Duque is intent on scrapping.

But the accord remains contentious and Duque pledged throughout his campaign to make changes that would deliver "peace with justice." Through constitutional reform or by decree, he could proceed with proposals such as not allowing ex-combatants behind grave human rights abuses to take political office until they have confessed their war crimes and compensated victims.

The current agreement allows most rebels to avoid jail, a sore point for many.

Duque's detractors warn that his victory could throw an already delicate peace process into disarray.

"I think it will set up a big constitutional battle," said Cynthia Arnson, director of the Latin America program at the Woodrow Wilson International Center for Scholars in Washington.

Duque is the son of a former governor and energy minister who friends say has harbored presidential aspirations since he was a child. The father of three entered public service almost two decades ago as an adviser to the man he will succeed a president, Santos, who was then Colombia's finance minister.

He later moved to Washington, where he spent more than a decade at the Inter-American Development Bank, first as an adviser for three Andean countries and later as chief of the cultural division.

It was during that time that Duque forged a close relationship with Uribe, the torchbearer of conservatives who is both adored and detested by legions of Colombians.

With Uribe's backing, Duque was elected to Colombia's Senate in 2014. He earned a reputation as a like-minded security hawk who did his homework and earned the respect of colleagues across the political spectrum.

Throughout his campaign, Duque was dogged by accusations he would be little more than a puppet for Uribe, who is constitutionally barred from seeking a third term. Though praised for weakening the FARC and drawing record foreign investment, Uribe has also been blamed for the military's killing of thousands of civilians who were falsely portrayed as rebels to inflate body counts.

Toward the end of his victory speech, Duque thanked Uribe but said he would strive to bridge Colombia's divisions. He said he wants to see rank-and-file guerrilla members succeed in civilian life and become part of a growing Colombian economy.

"I'm not going to govern with hatred," he said. "Neither in my mind nor my heart is there a desire for revenge and retaliation."

"These are momentous elections," President Juan Manuel Santos, who will step down in August, said as he cast his ballot early in the day.

His efforts to end the war with the FARC brought him the Nobel Peace Prize, though he is leaving office with record unpopularity in a country of 49 million people.