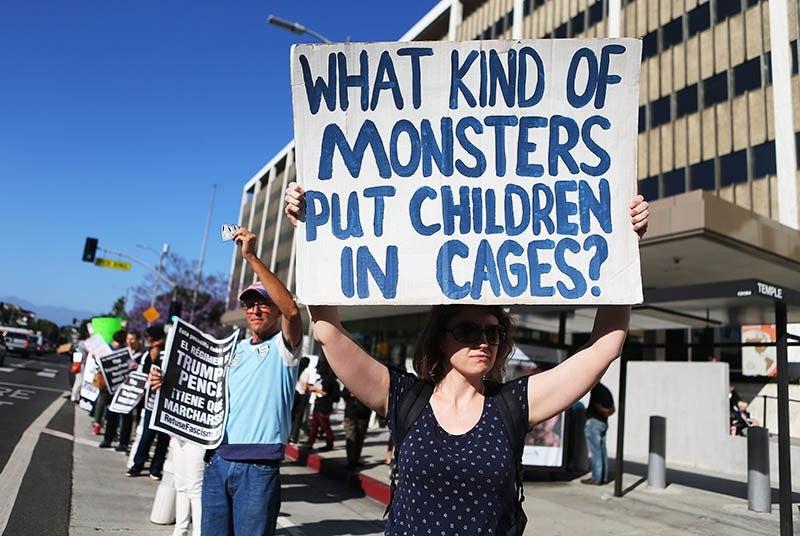 Protestors demonstrate against the separation of migrant children from their families in front of the Federal Building on June 18, 2018 in Los Angeles, California. (Getty Images/AFP)
by Daily Sabah with Agencies Jun 19, 2018 12:00 am

An audio recording published by ProPublica of the wails of migrant children separated from their parents at the U.S. border has thrown gasoline on the already raging outcry over the inhumane practice recently adopted by U.S. immigration officials.

As several Central Americans are heard desperately sobbing and wailing, some so hard they almost cannot breathe, a border agent jokes, "Well, we have an orchestra here."

"What we're missing is a conductor," he tells the sobbing children.


The children in the recording are believed to be between age four and 10.

At least 2,300 of these youngsters have been separated from their parents since April, when President Donald Trump's administration launched its "zero tolerance" immigration policy. More than 100 of those are under the age of four.

In the past, some migrants entering illegally were caught and then released. Now, the U.S. administration has moved to prosecute anyone who seeks to enter the country illegally, which it says requires the children to be taken away.

"Mommy! I want to go with dad," a young girl is heard crying out on the audio recording, sobbing so hard she is short of breath.

Another apparently older girl adds: "I don't want to get separated from my dad." The children were mostly from El Salvador and Guatemala, both violence-plagued Central American countries.

The U.S. action has sparked outrage at home -- from both Trump's Democratic foes and his fellow Republicans -- and around the world, as well as concerns from even First Lady Melania Trump.

One utterly distressed Salvadoran girl, which ProPublica said was only 6 years old, can be heard begging authorities to call her aunt.

"I can go home with my auntie, at least," the girl said, proudly explaining that she memorized it. "I have her number. Then after my auntie gets me to bring me home with her, my mom will come as soon as she can, to pick me up."

The audio was recorded last week, according to the transparency group ProPublica.

The girl's aunt said the experience had been truly difficult.

"Imagine getting a call from your six-year-old niece. She's crying and begging me to come and get her out," the aunt told ProPublica.

"She says 'I promise I will be really good. But please, please get me out of here. I am all alone.'"

Homeland Security Secretary Kirstjen Nielsen – who falsely stated the action of separated children and parents was an enforcement of immigration law – told reporters Monday that she had not heard the recording.

Nielsen defended the department's actions and told reporters to refer to the "standards" for treatment of migrant children.

One reporter in the room, Olivia Nuzzi from New York Magazine, decided to share the audio clip with Nielsen after she was not called on for questions.

"After another reporter's phone began loudly ringing with a melodic jingle, I figured the briefing room could probably deal with a more important disturbance," Nuzzi wrote on Twitter after playing the clip in the newsroom.

Washington's new policy of separating migrant children from their parents has been met with outcry – both at home and abroad – with the U.N. decrying the policy as "unconscionable."

Many Republicans – including Former First Lady Laura Bush, Senator Susan Collins and Former Trump adviser Anthony Scaramucci – have called the issue "cruel" and warned that it could hurt President Donald Trump if not resolved quickly.