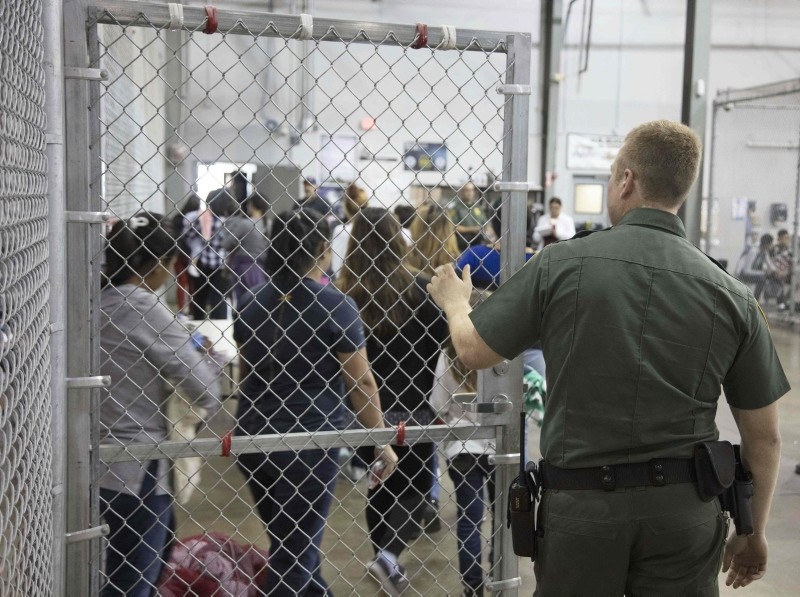 Immigrant children as young as 14 housed at a juvenile detention center in Virginia say they were beaten while handcuffed and locked up for long periods in solitary confinement, left nude and shivering in concrete cells.

The abuse claims against the Shenandoah Valley Juvenile Center near Staunton, Virginia, are detailed in federal court filings that include a half-dozen sworn statements from Latino teens jailed there for months or years. Multiple detainees say the guards stripped them of their clothes and strapped them to chairs with bags placed over their heads.

"Whenever they used to restrain me and put me in the chair, they would handcuff me," said a Honduran immigrant who was sent to the facility when he was 15 years old. "They also put a bag over your head."

In addition to the children's first-hand, translated accounts in court filings, a former child-development specialist who worked inside the facility told The Associated Press she saw kids there with bruises and broken bones they blamed on guards. She spoke on condition of anonymity because she was not authorized to publicly discuss the children's cases.

In court filings, lawyers for the detention facility have denied all allegations of physical abuse.

Many of the children were sent there after U.S. immigration authorities accused them of belonging to violent gangs, including MS-13. President Donald Trump has repeatedly cited gang activity as justification for his crackdown on illegal immigration.

But Kelsey Wong, a program director at the facility, said during a recent congressional hearing that in many cases the children did not appear to be gang members and were suffering from mental health issues.

The Shenandoah lockup is one of only three juvenile detention facilities in the United States with federal contracts to provide "secure placement" for children who had problems at less-restrictive housing. It was built by a coalition of seven nearby towns and counties to lock up local kids charged with serious crimes.

Since 2007, about half the 58 beds are occupied by both male and female immigrants between the ages of 12 and 17 facing deportation proceedings. Though incarcerated in a facility similar to a prison, the immigrant children have not yet been convicted of any crime.

On average, 92 immigrant children each year cycle through Shenandoah, most of them from Mexico and Central America.

The lawsuit filed against Shenandoah alleges that young Latino immigrants held there "are subjected to unconstitutional conditions that shock the conscience, including violence by staff, abusive and excessive use of seclusion and restraints, and the denial of necessary mental health care."

The complaint filed by a Washington-based legal advocacy group recounts the story of an unnamed 17-year-old Mexican citizen apprehended at the southern border. The teen fled an abusive father and violence fueled by drug cartels to seek asylum in the United States in 2015.

After stops at facilities in Texas and New York, he was transferred to Shenandoah in April 2016 and diagnosed during an initial screening by a psychologist with three mental disorders, including depression. The lawsuit alleges the teen has received no further significant mental health treatment.

The lawsuit recounts multiple alleged violent incidents between Latino children and staff at the Shenandoah center. It describes the guards as mostly white, non-Spanish speakers who are undertrained in dealing with individuals with mental illness.

In their sworn statements, the teens reported spending the bulk of their days locked in their cells, with a few hours set aside for classroom instruction, recreation and meals. Some said they had never been allowed outdoors.

The lawsuit says poor conditions and verbal abuse by staff often escalated into physical confrontations, as the frustrated children acted out. The staff regularly responded by "applying an excessive amount of force that goes far beyond what is needed to establish or regain control."

In the case of the Mexican 17-year-old, the lawsuit said a staff member who suspected him of possessing contraband threw him to the ground and forcibly tore off his clothes for an impromptu strip search. Though no forbidden items were found, the teenager was transferred to a unit designated for children who engage in bad behavior.

The lawsuit said Latino children were frequently punished by being restrained for hours in chairs, with handcuffs and cloth shackles on their legs. Often, the lawsuit alleged, the children were beaten by staff while bound.

As a result of such "malicious and sadistic applications of force," the immigrant youths have "sustained significant injuries, both physical and psychological," the lawsuit said.

After being subjected to such treatment, the 17-year-old Mexican youth said he tried to kill himself in August, only to be punished with further isolation. On other occasions, he said, he cut his wrists with a piece of glass.

The lawsuit alleges other immigrant youths held at Shenandoah have also engaged in cutting and other self-harming behaviors, including ingesting shampoo and attempting to choke themselves.

A hearing in the case is set for July 3 before a federal judge in the Western District of Virginia.