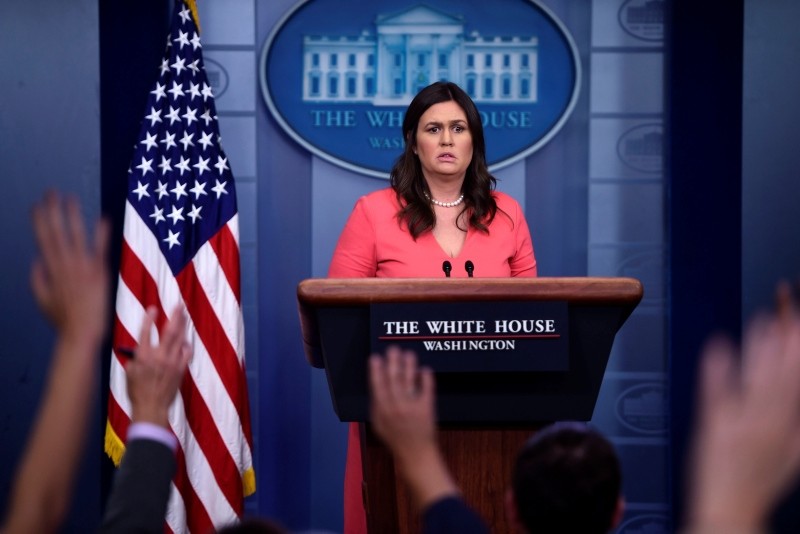 White House press secretary Sarah Huckabee Sanders said Saturday in a tweet that she was booted from a Virginia restaurant because she works for President Donald Trump.

Sanders said she was told by the owner of The Red Hen in Lexington, Virginia, that she had to "leave because I work for @POTUS and I politely left."

She said the event Friday evening said far more about the owner of the restaurant than it did about her.

"I always do my best to treat people, including those I disagree with, respectfully and will continue to do so," Sanders said in the tweet from her official account, which generated 22,000 replies in about an hour.

Sanders' treatment at the restaurant created a social media commotion with people on both sides weighing in with their critique, including her father, former Arkansas governor and Republican presidential candidate Mike Huckabee.

"Bigotry. On the menu at Red Hen Restaurant in Lexington VA. Or you can ask for the 'Hate Plate,'" Huckabee said in a tweet, quickly generating 2,000 replies in about 30 minutes. "And appetizers are 'small plates for small minds.'"

On Yelp, a reviewer of the restaurant from Los Angeles wrote: "Don't eat here if you're a Republican, wearing a MAGA hat or a patriot."

But many reviewers were also supportive of the restaurant owner's actions.

"12/10 would recommend. Bonus: this place is run by management who stuck up for their beliefs and who are true Americans. THANK YOU!!!!" said a reviewer from Commerce City, Colorado.

No one answered the phone at the restaurant, which was not scheduled to open until the evening. Lexington is about a three-hour drive from the nation's capital and is in Virginia's Shenandoah Valley.

The separation of families trying to enter the U.S. at the southern border has intensified political differences and passions that were already at elevated levels during the Trump presidency. Earlier in the week, Trump's homeland security secretary, Kirstjen Nielsen, cut short a working dinner at a Mexican restaurant after protesters shouted, "Shame!" until she left.