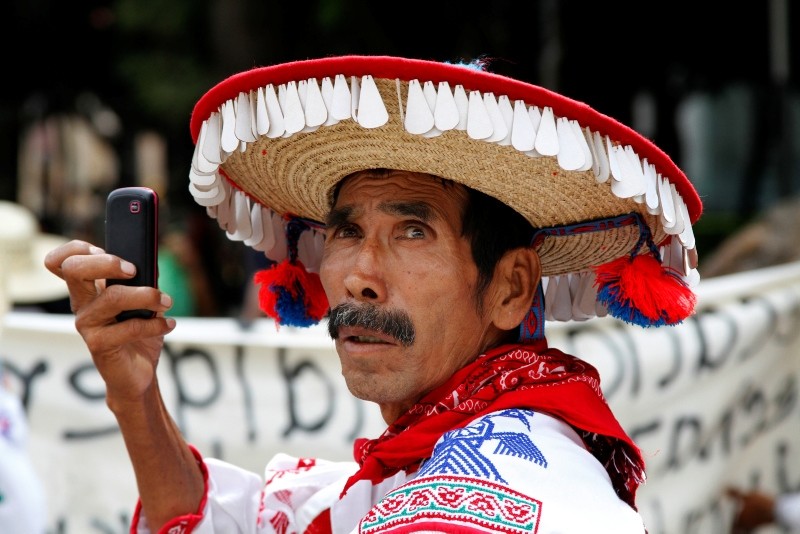 In this Oct. 12, 2013 file photo, a striking teacher from the Guichol Indian community in northern Mexico uses his cell phone during a march by unionized teachers in Mexico City. (AP Photo)
by Jun 26, 2018 12:00 am

From a semi-naked candidate's Tinder campaign to the heavy-metal rocker who says he wants to be Mexico's next president, here is a look at the lighter side of the country's elections this Sunday.

Striking suggestive poses in her underwear, Ana Sofia Orellana is waging an unusual campaign for the legislature in the state of Puebla — on the dating app Tinder.

Her slogan: "Never has politics been so attractive."

Fifteen men running for city council in the southern state of Oaxaca were disqualified when the electoral court ruled they were not transgender, as they claimed, but straight men trying to cheat gender quotas.

"Muxes," as they are known, typically wear women's clothing and, under Mexico's gender equity laws, are allowed to run for office as women.

But after a group of real muxes complained, the court ruled the 15 men's candidacies were "a fraud."

Punk star Sergio Arau, a tattooed rocker with earrings and a mohawk, is running for president of Mexico -- or so he would have the internet believe.

Arau is mounting a parody campaign, complete with a campaign song written with his band, Heavy Mex.

In "I Want to Be President," Arau promises to make his friends rich, make his relatives ministers and "fuck the people."

No one is owning up to writing another hit campaign song — a viral video called "Good Girl" in which an Audi-driving university student tells her bourgeois family she is voting for the leftist front-runner, Andres Manuel Lopez Obrador, widely known as "AMLO."

The video shows the striking young woman, identified as Almudena Ortiz Monasterio, grinding her hips in church as a priest raps, "Your vote is like your virginity, don't give it to someone who stands for impunity" — a dig at the veteran leftist's supposedly corrupt opponents.

But Lopez Obrador's party denounced the video, and no one is admitting to being Ortiz Monasterio, whose social media accounts were created just before the song was uploaded.

Waving a staff shaped like the pre-Columbian serpent god Quetzalcoatl, Vazquez predicted this month that the front-runner would suffer an upset by ruling-party candidate Jose Antonio Meade.

Vazquez is not exactly known for his infallibility — in 2016, he predicted Donald Trump would lose the US Republican primary election.

But he did correctly call another upset, predicting Mexico would defeat Germany 1-0 in their opening World Cup match.

That match was the downfall of one candidate from Lopez Obrador's Morena party, who took smiling selfies from the stadium.

Juan Antonio Villarroel Garcia, who was running for mayor of the city of Atlixco, "abandoned his campaign responsibilities" by traveling to Russia for the tournament, the party's disciplinary committee ruled, stripping him of his candidacy.

For those seeking divine intervention in the elections, a market in Lopez Obrador's home state, Tabasco, is selling devotional candles of the kind Mexicans use to pray to saints — but decorated with the candidate's picture.

Vendors told French Press Agency (AFP) the idea was not to make a saint out of Lopez Obrador — whose critics already accuse him of messianic tendencies — but to bring him positive energy.

In the land of tequila and mariachis, even elections can be cause for a party — and there is no shortage of products to fuel the fiesta.

Lopez Obrador fans in Tabasco have made an AMLO alcoholic beverage with hibiscus flowers.

Creative entrepreneurs have launched masks, socks and pinatas of the candidates.

In the northern city of Juarez, artisan Silvia Sanchez has giant pinatas of all four presidential candidates in her shop window.

It is a favorite spot for people to stop for selfies — and debate which candidate they would most like to smack.