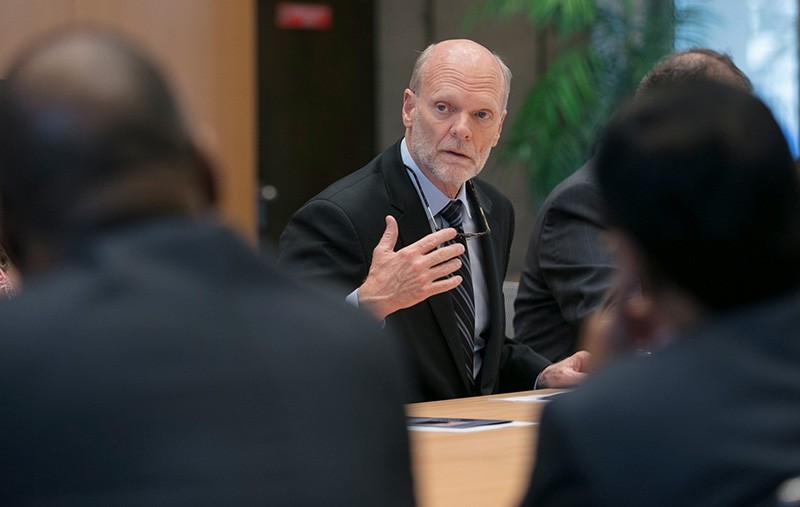 Ken Isaacs, U.S. candidate for Director general of the United Nations' International Organization for Migration (IOM) is pictured in this photo released by U.S. Mission Geneva, in Geneva, Switzerland, June 28, 2018. (Reuters Photo)
by reuters Jun 28, 2018 12:00 am

President Donald Trump's nomination of a Christian charity executive who has disparaged Islam to head the U.N. migration agency could see countries reject an American for the first time in nearly 50 years when they pick its new leader on Friday.

Since the body now known as the International Organization for Migration was founded to manage the vast movement of people in post-World War Two Europe, all nine of its leaders have been Americans apart from a Dutchman who ran it in the 1960s.

But Trump's choice of Ken Isaacs, a vice president of U.S. evangelical charity Samaritan's Purse, could end that streak.

Isaacs, whose only major government experience was a 2004-2005 stint under George W. Bush as a political appointee in charge of disaster relief at the U.S. overseas aid agency, is one of three candidates to succeed William Swing, a veteran U.S. and U.N. diplomat retiring after a decade as IOM chief.

The IOM is involved in politically-sensitive operations around the globe, from helping European countries manage the arrival of hundreds of thousands of asylum seekers to aiding Rohingya refugees in Bangladesh.

In February, shortly after the Trump administration nominated Isaacs to lead the IOM, the Washington Post dug up tweets and social media posts in which he disparaged Muslims.

Isaacs has since apologized for hurting anyone's feelings and said he had "never shown discrimination against anybody or anything, period." He said he had been retweeting and commenting on material to provoke debate.

In one post reported by the paper and since deleted, Isaacs wrote in a comment on a CNN story about a militant attack in London: "...if you read the Quran you will know that 'this' is exactly what the Muslim faith instructs the faithful to do."

In another, he wrote on Twitter: "If Islam is a religion of peace, let's see 2 million Muslims in National Mall marching against jihad & stand for America! I haven't seen it!"

The U.S. State Department said it was "proper" that Isaacs had apologized, but his "private" social media posts did not disqualify him for the IOM post.

"Mr. Isaacs is committed to helping refugees and has a long history of assisting those who are suffering. We believe that if chosen to lead IOM, he would treat people fairly and with the dignity and respect they deserve."

Isaacs says he will not represent the U.S. administration if he leads the IOM. But he has also made clear he would not challenge Trump policies widely viewed as hostile to immigrants, such as a ban on citizens of seven Muslim majority nations entering the United States and a drastic scaling back of the U.S. program to accept refugees.

"I'm not going to speak on any country's domestic policy," he said, when asked at the March briefing about Trump's plan for a wall on the Mexican border.

At a press event in Geneva in March, Isaacs was introduced by Jennifer Arangio, senior director of the White House National Security Council: "He embodies what the United States believes."

Isaacs is up against Portuguese politician and ex-EU Justice Commissioner Antonio Vitorino, and Laura Thompson, a Costa Rican now serving as Swing's deputy. The vote will be held in secret.

The vote poses a dilemma for IOM states, Jeremy Konyndyk, who like Isaacs served as a head of U.S. foreign disaster assistance, told Reuters.

"Do they risk angering the Trump administration by rejecting its preferred candidate, or risk validating Trump's migration agenda by putting a Trump nominee in charge of IOM at the very moment his administration is attacking asylum in the U.S.?"

Konyndyk said Isaacs must disavow the views uncovered in his social media posts. "He has never fully repudiated his attacks on Muslims, descriptions of refugees as security threats, and mockery of climate science," Konyndyk wrote in an opinion piece for IRINnews.org, a news agency for humanitarian aid groups.

Eric Schwartz, president of Refugees International, wrote in the Washington Post on Monday that Isaacs' social media posts were "bigoted," "appalling" and must disqualify him.

More than 600 aid agencies that work in the migration field signed a letter to IOM member states last week which did not mention Isaacs by name but said the new IOM chief must demonstrate "a record of and commitment to respecting diversity and condemning xenophobia, discrimination and intolerance."

Privately, aid agency officials say their chief concern is that the real aim of the Trump administration -- which has already withdrawn from the Paris climate treaty, the U.N. human rights council, the U.N. cultural body UNESCO and U.N. negotiations on a "global compact" to manage migration -- is to undermine the IOM's role as a global body engaged in migration.

"The risk that we analyze is that Ken Isaacs is not independent from the Trump administration and could be a puppet put in to disrupt the U.N. system," said a senior official at one of the agencies supporting the letter, who requested anonymity because he may work with IOM in future.