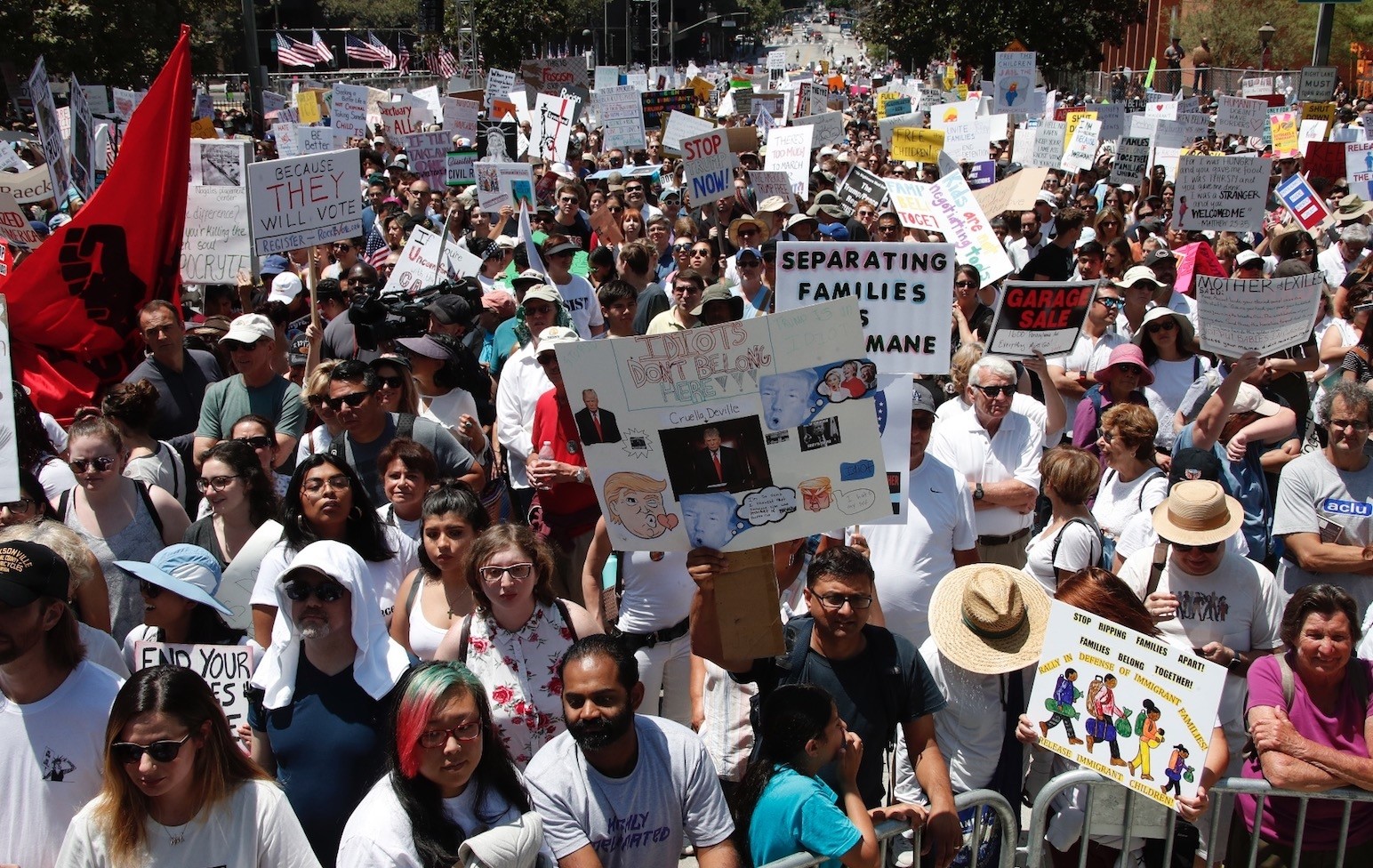 Protestors in many U.S. cities denounced Trump's ‘zero-tolerance' policy. Some rallies grew so large that violence broke out in places like Portland, Oregon

In major cities and tiny towns, hundreds of thousands of marchers gathered across America, moved by accounts of children separated from their parents at the U.S.-Mexico border, in the latest act of mass resistance against the U.S. government's immigration policies. Protesters gathered at more than 700 marches, from immigrant-friendly cities like New York and Los Angeles to conservative areas such as Appalachia and Wyoming.

They gathered on the front lawn of a Border Patrol station in McAllen, Texas, near a detention center where migrant children were being held in cages, and on a street corner near Trump's golf resort in Bedminster, New Jersey, where the president is spending the weekend.

The protests come after the U.S. Supreme Court on Tuesday handed Trump a major victory by upholding his ban on travelers from five primarily Muslim nations. More than 500 women, including a member of Congress, were arrested Thursday in the U.S. Capitol complex protesting Trump's immigration policy. Trump has made fighting immigration, both illegal and legal, a major plank of his "America First" policy agenda.

The Immigration and Customs Enforcement agency (ICE) makes arrests and otherwise enforces the administration's immigration crackdown, but an emerging coalition of politicians, activists and pro-immigrant protesters has begun calling

for the agency to be dismantled. "Occupy ICE" camps have been set up in several U.S. states. The president took to Twitter amid the protests, first to show his support for ICE as some Democrats called for major changes to the agency. Tweeting Saturday from New Jersey, Trump urged ICE agents to "not worry or lose your spirit" and wrote that "the radical left Dems want you out. Next it will be all police." He later tweeted that he never pushed House Republicans to vote for immigration overhaul measures that failed last week, contradicting a post three days ago in which he urged GOP congressional members to pass them.

Starting in early May, in an attempt to staunch the flow of tens of thousands of migrants to the southern U.S. border every month, Trump ordered the arrest of adults crossing the boundary illegally, including those seeking asylum. Many trying to cross the U.S.-Mexico border are destitute, fleeing gang violence and other turmoil in Central America. As a result of Trump's crackdown, distraught children were separated from their families, and according to widely broadcast pictures, held in chain-link enclosures, sparking domestic and global outrage.

Trump later signed an order ending the separation of families, but immigration lawyers say the process of reuniting children and their parents will be long and chaotic. About 2,000 children remain split from their parents, according to official figures released last weekend.

Marchers took to city parks and downtown squares from Maine to Florida to Oregon – in Alaska, Hawaii and Puerto Rico, on the international bridge between El Paso, Texas, and Juarez, Mexico, even in Antler, North Dakota, population 27. People braved the heat in Chicago and Atlanta to march. Some demonstrations were boisterous, others were quiet.

Five people were arrested outside an ICE office in Dallas for blocking a road. At least one arrest was made in Columbus, Ohio, when protesters obstructed a downtown street. Light-rail service temporarily shut down in Minneapolis as thousands of demonstrators got on the tracks.

A rally in Portland, Oregon grew so large that police had to shut down part of a major street. Anti-fascist and right-wing activists clashed in Portland on Saturday night as violence broke out during a march in support of a conservative Republican candidate for the U.S. Senate, media reported. Police have ordered participants in a march by Patriot Prayer to disperse after officers witnessed assaults and projectiles being thrown. Police said Saturday that some arrests were made at the downtown protest. The problems occurred as two opposing protest groups — Patriot Prayer and Antifa — took to the streets. People were lighting firecrackers and smoke bombs in the crowd, and police used flash bangs in an effort to disperse the clashing protesters. Officers searched for weapons and handcuffed at least two people. Compiled from wires