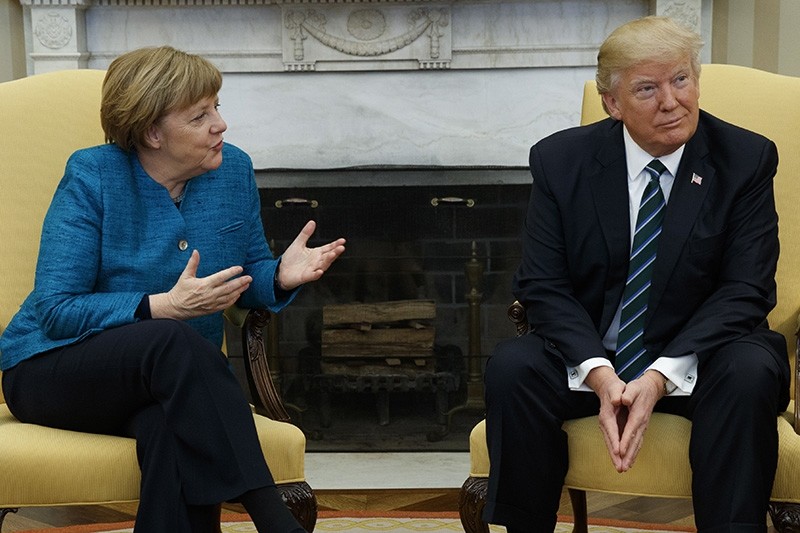 President Donald Trump sent letters last month to several NATO allies, demanding they increase defense spending and threatening to reduce U.S. global military presence if they did not, according to a report published Monday by The New York Times.

Trump reportedly sent the letters to Belgium, Canada, Germany and Norway, ahead of next week's NATO summit in Brussels, Belgium.

A diplomatic source familiar with the letters said they were "very tough," adding that they warned the U.S. was losing patience with its military allies.

According to The Times, the letter to German Chancellor Angela Merkel was particularly harsh, reportedly stating, "As we discussed during your visit in April, there is growing frustration in the United States that some allies have not stepped up as promised."

"Continued German underspending on defense undermines the security of the alliance and provides validation for other allies that also do not plan to meet their military spending commitments, because others see you as a role model," the president wrote.

Trump then threatened to reduce U.S. military presence around the globe if allies didn't "step up."

"It will, however, become increasingly difficult to justify to American citizens why some countries do not share NATO's collective security burden while American soldiers continue to sacrifice their lives overseas or come home gravely wounded," Trump reportedly wrote to Merkel.

The Trump administration has been mulling a large-scale withdrawal of U.S. troops from Germany, reports have said, after Trump suggested the 35,000 active-duty troops stationed there are unnecessary.

Prime Minister Charles Michel of Belgium, who also received the letter, told reporters he was "not very impressed by it," at an European Union summit in Brussels last week, according to German public broadcaster Deutsche Welle.

The White House has declined to comment on The Times' report.

The president's commitment to the alliance will be closely watched at next week's summit, as he has continued accuse its members of taking advantage of the U.S.

At a summit in 2014, NATO members committed to spend 2 percent of their gross domestic product on defense, but Trump has repeatedly alleged they are not fulfilling this commitment.