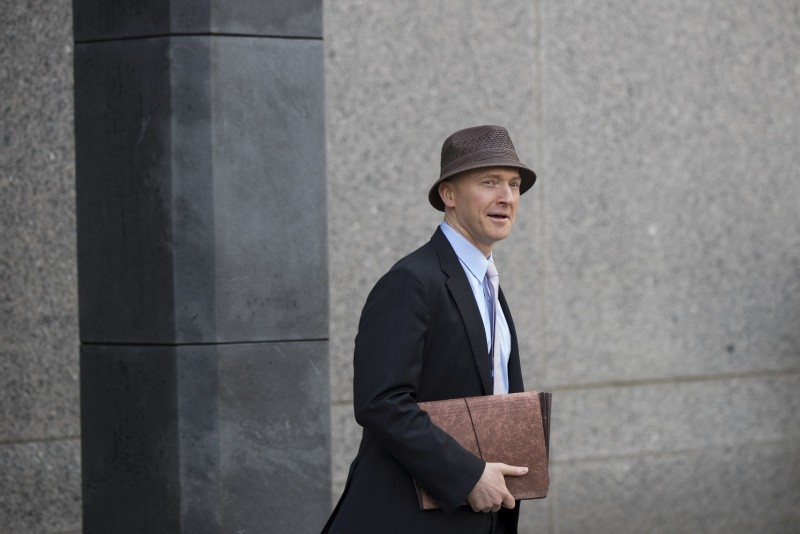 Carter Page arrives at the courthouse on the same day as a hearing regarding Michael Cohen at the United States District Court Southern District of New York, in New York City. (AFP Photo)
by French Press Agency - AFP
Jul 22, 2018 12:00 am

The FBI believed that a former campaign advisor to Donald Trump was "collaborating" with Russia as it worked to influence the 2016 presidential election, top secret documents released to U.S. news organizations have revealed.

The U.S. president hit back Sunday, portraying the wiretapping of his ex-aide as part of a partisan and "illegal" conspiracy because the FBI partly relied on information provided by Democrat-funded research in seeking its warrant.

The October 2016 application to the Foreign Intelligence Surveillance Court named Carter Page, a former foreign policy advisor to the Trump campaign, according to the documents published late Saturday by The New York Times.

The newspaper, along with USA Today and others, filed Freedom of Information Act requests to obtain the material, which the Justice Department released but with many details redacted.

"The FBI believes Page has been the subject of targeted recruitment by the Russian government," the initial FBI application says, continuing after a blacked-out section, "...undermine and influence the outcome of the 2016 presidential election in violation of US criminal law."

"The FBI believes that Page has been collaborating and conspiring with the Russian government," the document adds lower down.

Release of the documents came just over a week after special counsel Robert Mueller, probing possible collusion between Trump's 2016 campaign and Russia, indicted 12 Russian intelligence officers, accusing them of hacking Democratic challenger Hillary Clinton's campaign to steal documents, which were then publicly released.

It also caps a week dominated by Trump's extraordinary inaugural summit with Vladimir Putin, at which he seemed to take at face value the Russian leader's denial of election interference, dismissing the findings of his own intelligence chiefs.

In a series of tweets on Sunday, Trump said the release confirmed the surveillance of his campaign was a "Witch Hunt" because some of the information that led to the wiretapping was provided by former British intelligence agent Christopher Steele, who was hired on behalf of the Clinton campaign in 2016.

But Trump's tweets did not address the fact that the FISA application revealed its sourcing at length and was approved by a judge, before being renewed three times by three other judges, all appointed by Republican presidents.

The surveillance of Page sparked intense rivalry in February between lawmakers from Trump's Republican Party and their Democratic counterparts.

The former released a memo claiming Democratic-funded research prompted the FBI to spy on Page and that the agency was not sufficiently candid with the court about its sourcing.

Trump defied his own FBI director and the Justice Department to declassify the four-page Republican document, which was based on the much larger secret court application record which has now been released.

A counter-memo from Democrats argued that the surveillance request "was based on compelling evidence and probable cause."

Writing on the Lawfare blog, David Kris, who served as a prosecutor under the George W. Bush and Barack Obama administrations, argued the Republican memo now stood exposed as dishonest.

"The footnote disclosing Steele's possible bias takes up more than a full page in the applications, so there is literally no way the FISA Court could have missed it," he said. "The FBI gave the court enough information to evaluate Steele's credibility."

In the documents released Saturday, the FBI cited a source which, it said, had a history of providing reliable information.

Trump is not named in the document but identified only as "Candidate #1."

The FBI, in its initial application in October 2016, said it "believes that the Russian Government's efforts are being coordinated with Page and perhaps other individuals associated with Candidate #1's campaign."

It added that "Page has established relationships with Russian Government officials, including Russian intelligence officers."

Page has not been charged. Appearing Sunday on CNN, he denied the allegations. "I've never been an agent of the foreign power in any -- by any stretch of the imagination."

He added: "To call me an advisor, I think is way over the top," before host Jake Tapper interjected to cite a 2013 letter in which Page called himself "an informal advisor to the staff of the Kremlin."

The release of the FISA application came as the Trump administration was still battling to push past harsh criticism of the US president's Helsinki summit with Putin.

"I had a GREAT meeting with Putin and the Fake News used every bit of their energy to try and disparage it. So bad for our country!" Trump tweeted Sunday.

But former secretary of State John Kerry, a Democrat, told CBS that Trump's performance there was "one of the most disgraceful, remarkable moments of kowtowing to a foreign leader" ever by an American president.

Amid the blowback, Trump surprised Americans -- including director of national intelligence Dan Coats -- by announcing he had invited Putin to visit Washington later this year.

Informed of that plan during a live television interview, a clearly startled Coats grinned and said, "That's going to be special."

After reports said Trump was incensed by Coats' reaction, the intelligence chief issued a formal statement carried by US media saying that his "admittedly awkward response was in no way meant to be disrespectful."