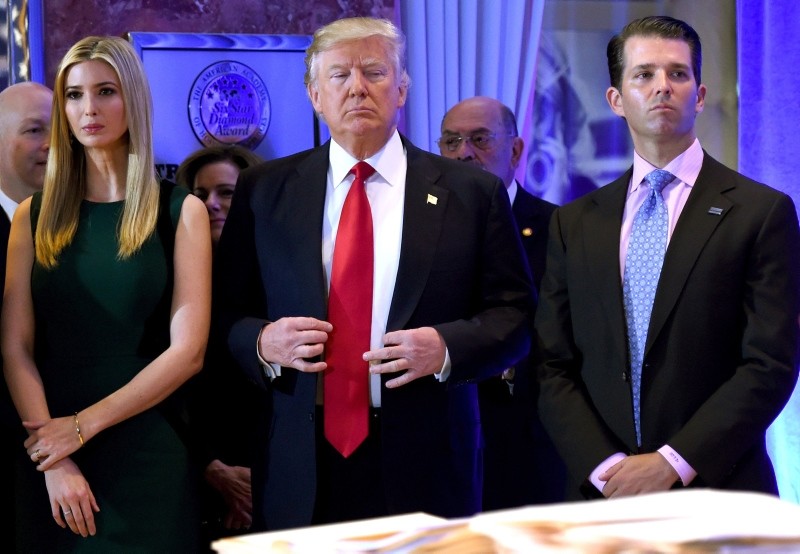 President Donald Trump denied Friday that he knew in advance of a meeting during the 2016 election campaign at which Russians promised to share dirt on his rival Hillary Clinton -- shooting back at an explosive allegation by his longtime lawyer.

The U.S. president has repeatedly denied all knowledge of the encounter, but according to several U.S. media his former lawyer Michael Cohen -- who is under federal investigation -- now says he was present when Donald Jr told his father about the Russian offer to meet, and that Trump approved.

"I did NOT know of the meeting with my son, Don jr," Trump fired back in a tweet early Friday.

"Sounds to me like someone is trying to make up stories in order to get himself out of an unrelated jam," Trump said.

The president, his son, his lawyers and other administration officials have repeatedly said Trump did not know about the meeting until news of it broke in July 2017.

Cohen's assertion is highly important: if he can back it up, it could be a key step toward proving collusion between the Trump campaign and a Russian effort to help Trump win the presidency -- a central focus of the probe by special counsel Robert Mueller.

It was also set to further fan speculation about how much damage Cohen -- who once declared fierce loyalty to his real estate magnate boss -- can now inflict on Trump if he chooses to cooperate with federal prosecutors.

The Trump Tower meeting was arranged by a music promoter, Rob Goldstone, who reached out to Trump Jr saying he had "official documents and information that would incriminate Hillary and her dealings with Russia and would be very useful to your father."

Trump Jr responded "I love it" when first offered the "dirt" on Clinton, the Democratic nominee. But he has said since no "meaningful information" was offered and that the meeting focused mostly on adoptions of Russian children.

CNN said Cohen lacks evidence such as an audio recording to corroborate his assertion that Trump knew of the meeting.

But both CNN and NBC reported -- citing anonymous sources -- that Cohen is willing to make his claim to Mueller.

The special prosecutor has already indicted more than 30 people, including 12 Russian intelligence agents indicted this month for allegedly hacking computer networks of the Democratic Party and publicly disseminating the stolen information.

Manafort was the first former Trump campaign aide to be jailed in the sprawling probe, facing money laundering and tax evasion charges among others.

Trump, who stands accused of pliancy towards Russian President Vladimir Putin, insists no president has been as "tough" on Russia and denies any collusion between his campaign and Moscow.

Later Friday the U.S. leader was to gather his National Security Council for a meeting on election security, as U.S. intelligence chiefs warn Russia will seek to meddle again in the November midterm polls.

Cohen's reported claim about the Trump Tower meeting follows the release of a taped conversation between himself and Trump -- with reports suggesting there may be more tapes.

On the recording, released by Cohen's attorney Lanny Davis, Trump can be heard discussing the payment of hush money to Playboy model Karen McDougal, who says she had a months-long affair with Trump in 2006.

McDougal had sold the rights to her story to the parent company of the National Enquirer for $150,000. The Trump-Cohen discussion was essentially about reimbursing that company, run by David Pecker, a friend of Trump, to acquire the rights.

During Trump's campaign his team denied any knowledge of the deal, but in the conversation taped two months before the election, Trump expressed no surprise about it.

In an interview early this month, Cohen said his family and the country commanded his "first loyalty," raising the prospect he could be preparing to cooperate with prosecutors.

Cohen's own lawyer, Davis, has compared the Cohen tape to the Watergate tapes that ultimately forced Republican president Richard Nixon to resign in 1974 as impeachment loomed.