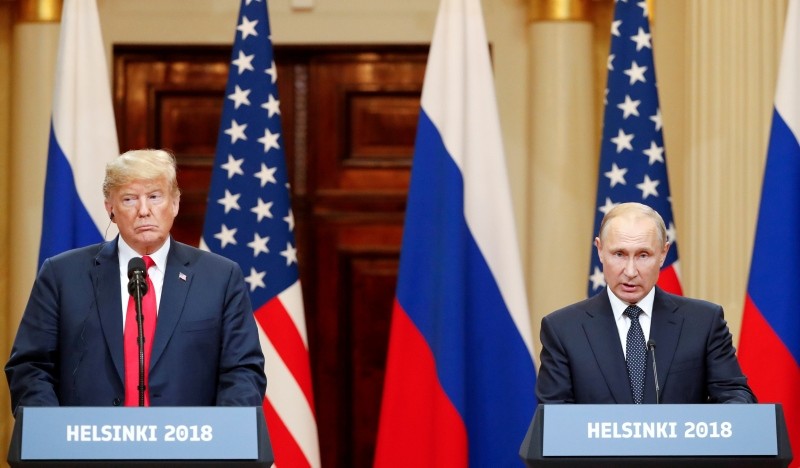 Putin had said earlier Friday during a meeting in Johannesburg, South Africa, that he was ready to invite Trump and also ready to visit Washington if conditions are right.

That's fine with Trump, said Press Secretary Sarah Huckabee Sanders. The U.S. president "looks forward to having President Putin to Washington after the first of the year, and he is open to visiting Moscow upon receiving a formal invitation," she said.

Trump had initially invited Putin to Washington this fall for a follow-up meeting to their controversial Helsinki summit. But National Security Adviser John Bolton said this week that Trump now believes the follow-up sit-down should take place "after the Russia witch hunt is over" and "after the first of the year."

He was referring to the federal investigation into Russia's interference in the 2016 election and whether Trump's campaign assisted or was aware of the efforts. Trump has repeatedly denounced the investigation as a "witch hunt" intended to delegitimize his presidency.

Putin said Friday, "I understand very well what President Trump said: He has the wish to conduct further meetings. I am ready for this."

"We are ready to invite President Trump to Moscow," Putin said, according to the state news agency RIA-Novosti. "By the way, he has such an invitation, I told him of this."

He did not clarify if that was a face-to-face invitation to be followed by a formal one.

"I am prepared to go to Washington, but, I repeat, if the appropriate conditions for work are created," the Russian leader said.

Separately, Trump's defense chief, Jim Mattis, said he was considering the possibility of the first talks in years between the defense chiefs of the United States and Russia.

Following the backlash in the United States over Trump's cordial public tone with Putin in Helsinki, U.S. and Russian officials backed away from Trump's proposal to schedule a follow-up meeting in Washington in the fall.

The White House on Wednesday postponed that invitation until next year after the federal probe into Russian election meddling is over.

Following the Helsinki summit, Trump was criticized at home for failing to confront Putin publicly over Moscow's interference in the 2016 presidential election, and for seeming to contradict his own intelligence agencies on the threat from Russia.

Trump defended his conduct at the summit and the White House said no agreements were reached at the one-on-one meeting other than having national security teams meet. Mattis said on Friday no policy changes came out of the summit.

The last time Trump was in the Russian capital was in 2013, to attend a Miss Universe beauty pageant.

That visit surfaced in the FBI investigation of Russian election activities after an intelligence dossier detailed an alleged 2013 encounter involving Trump and prostitutes in Moscow. Trump has denied there was such an encounter.

Referring to the proposal for a meeting in the United States, Putin said: "I am ready to go to Washington. I repeat once again, if the right conditions for work are created."

Putin said that, in the meantime, it was possible that he and Trump would meet on the sidelines of the Group of 20 summit in Argentina in November or at another international event.

Relations between Russia and the United States have been fraught because of disputes over Russia's annexation of Crimea and allegations - denied by Moscow - of interference in American elections.

Both Trump and Putin have said they are determined to improve relations. However, efforts to achieve detente have been fiercely resisted by U.S. lawmakers, including some in Trump's own Republican Party, who accuse him of being too friendly toward Putin.

Trump has repeatedly denied his campaign colluded with Russia and has characterized the investigation by Special Counsel Robert Mueller as a witch hunt.

The president on Friday denied knowing about a 2016 meeting his son Donald Trump Jr. and other campaign staff held at Trump Tower with a group of Russians who offered damaging information about Democratic rival Hillary Clinton. A CNN report said his longtime lawyer Michael Cohen planned to tell Mueller that Trump did know of the meeting.