11 killed, 70 injured in a single weekend across Chicago 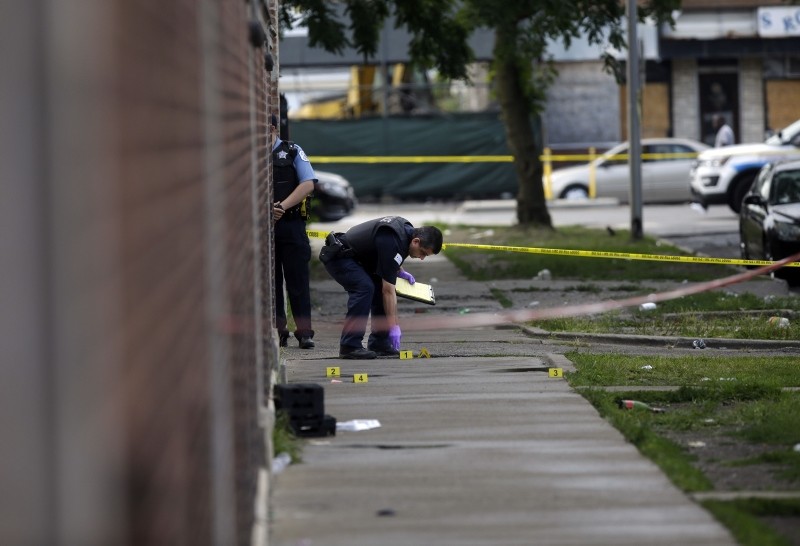 Chicago Police officers and detectives investigate a shooting where multiple people were shot on Sunday, August 5, 2018 in Chicago, Illinois. (AFP Photo)
by Daily Sabah with Reuters Aug 06, 2018 12:00 am

At least 70 people were shot in Chicago over the weekend, with 11 fatalities, city police said on Sunday, a stark violent streak in a city where authorities say gun violence has been decreasing this year.

The shootings were at its worst during the seven hours from midnight Saturday to early Sunday morning in which 40 of the injuries happened.

"These were both random and targeted shootings on our streets," said Fred Waller, Chief of the Patrol Division of the Chicago Police Department, in a press conference.

He said most of the shootings are connected to gang violence in the city of about 2.7 million people, the third-largest in the United States.

Police said gunmen targeted a block party, a gathering after a funeral, and other gatherings on a night where thousands of people gathered for a downtown concert.

Local media reported that the brunt of the violence happened in the city's West Side, where 25 people were shot in separate attacks.

Waller touted that shootings in 2018 were down from last year.

The Chicago Tribune, which has been tracking shooting statistics, reported earlier this month that shootings in the city have declined, with 533 fewer shootings as of Aug. 1 than the same time in 2017.

"By no means do these statistics show that we have a victory," Waller said.

He said that police are working with other law enforcement groups to target gang activity.

"I promise we will not be defeated," Waller said.

More specifics on the shootings were not immediately available late on Sunday.