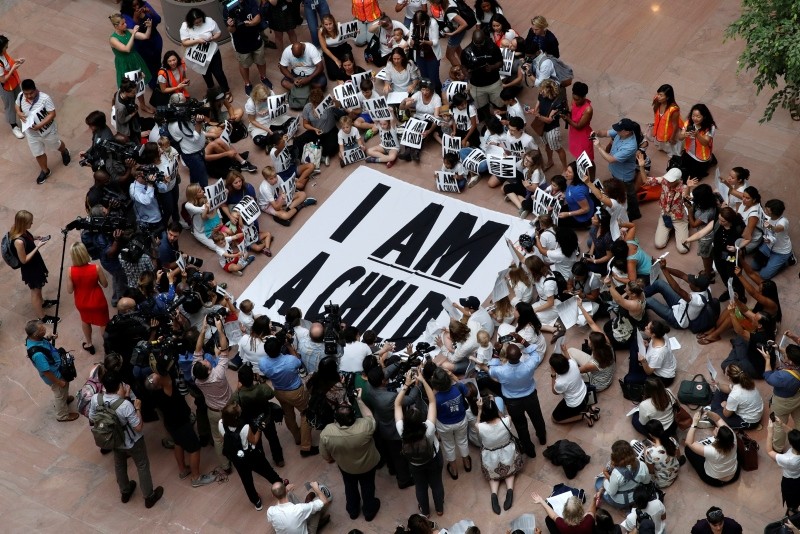 In this July 26, 2018, file photo, families with young children protest the separation of immigrant families with a sit-in at the Hart Senate Office Building on Capitol Hill in Washington. (AP Photo)
by Aug 17, 2018 12:00 am

Hundreds of immigrant children remain separated from their families in the United States three weeks after a court-imposed deadline to reunite them with their parents.

As of Thursday, 541 of the children remained separated and under care of the Office of Refugee Resettlement, down from 559 a week ago. Another 24 under age five also remained in federal care.

Many of those separated had crossed the border illegally, while others had sought asylum at a border crossing.

The U.S. government has largely reached an agreement with immigrant rights advocates on a revised plan for reuniting hundreds more families separated by border officials after they crossed into the country from Mexico.

In a Thursday court filing, U.S. Department of Justice lawyers said the changes would ensure an "efficient process" for reunifications, without requiring that parents removed from the United States be returned for that purpose.

But lawyers from the American Civil Liberties Union said in a separate filing that some families could be "made whole" only if parents were returned to the country, and the failure to address their rights was a "significant" area of dispute.

They said this nevertheless should not impede "swift reunification efforts," and that they "agree to the plan as revised," including its provisions for locating and interviewing removed parents.

The plan is the second stage of government efforts to reunite 2,551 children ages 5 to 17 with their parents, after they had been separated under U.S. President Donald Trump's now-abandoned "zero tolerance" policy toward illegal immigrants.

A weekly hearing on the reunification process is scheduled for Friday.

The reunification plan outlines means to locate removed parents, determine their intentions for their children, and address concerns about children's safety and parentage.

One new provision would require the government to arrange travel for children being reunited with their parents in their countries of origin.

Another would ensure that such reunifications would not impair those children's future ability to seek asylum if they returned to the United States.

They said those advocates want to grant children of removed parents a legal right to demand their return to consult on asylum and related proceedings.

The government "strongly disputes" that this right exists, and believes granting the request would "directly and significantly interfere" with reunifications, its lawyers said.

Trump abandoned the separation policy on June 20 after broad criticism at home and internationally.