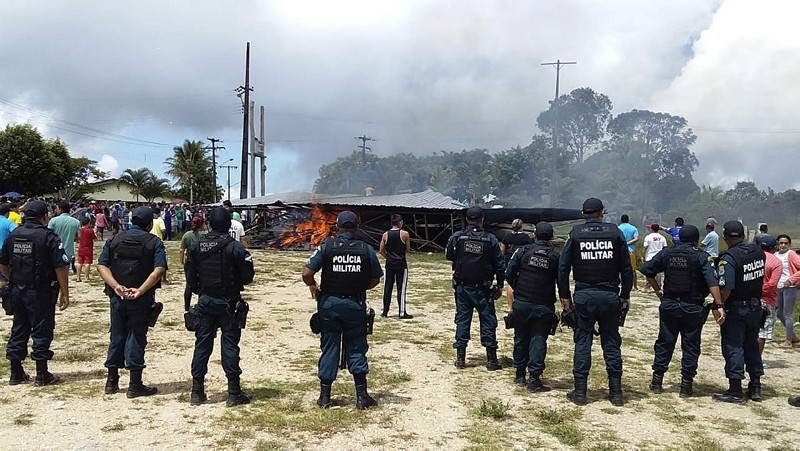 Police try to maintain control as Brazilian people demonstrate against the presence of Venezuelan immigrants in Pacaraima, Brazil, Aug. 18, 2018. (EPA Photo)
by Associated Press Aug 19, 2018 12:00 am

Residents of the Brazilian border town of Pacaraima attacked Venezuelan immigrants on Saturday after a local storeowner was robbed, stabbed and beaten in an assault blamed on four migrants, authorities said.

Pacaraima, in the northern jungle state of Roraima, is a major border crossing with Venezuela, where economic and political turmoil has driven tens of thousands to cross into Brazil over the past few years.

After a rally held to protest the attack against the storeowner, groups of residents roamed the town hurling rocks at the immigrants and setting fire to their belongings.

Police said the storeowner, who was beaten and robbed on Friday night, has been hospitalized and is in stable condition.

The Roraima state government estimates that more than 50,000 Venezuelan refugees have crossed the border, occupying already existing shelters or sleeping in tents, plazas and streets. The influx was nearly equal to 10 percent of the state's population of 520,000 inhabitants.

Police said that to escape the violence, hundreds of immigrants crossed the border back into Venezuela. On a video posted by the G1 news portal a man's voice is heard shouting "Get out. Get out. Go back to Venezuela."

Roraima state Governor Suely Campos made a plea to temporarily close the border and asked Brazilia to send security reinforcements to "face the increase in crime" she links to Venezuelans in the region.

In turn, the public security ministry vowed to send a contingent of 60 troops due to arrive Monday to join teams in the area.

Wandenberg Ribeiro Costa, one of the organizers of Saturday's rally, told the G1 news portal "we have expelled the Venezuelans."

Claudio Lamachia, president of the Brazilian Bar Association, said in a statement that the violence that took place in Pacaraima "exposed the humanitarian drama afflicting our neighbors ... who are trying to improve their lives and survive."

"The state of Roraima does not have the conditions to shelter all the immigrants," he said, adding that close to 800 Venezuelans enter Roraima every day.

The crisis has prompted state authorities in recent months to try to limit services to Venezuelans and temporarily shut the border. The federal government and high courts have curtailed attempts to do those things.

Milene de Souza, a volunteer at an evangelical church, told the Associated Press by phone that the situation is desperate.

"The world has to see what is happening here, where no one knows what to do," she said, adding that every day she helps Venezuelan engineers, doctors, lawyers and other professionals who sleep on the streets "with their diplomas tucked under their pillows."