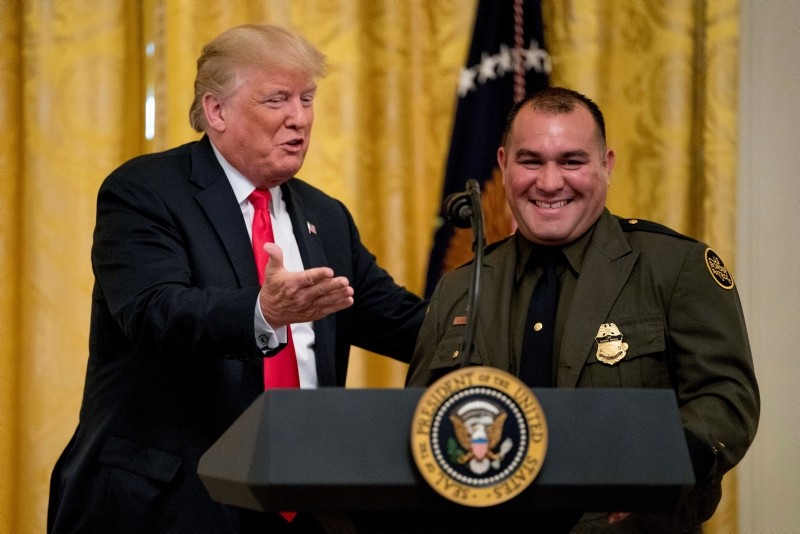 President Donald Trump kept mistakenly referring to the Customs and Border Protection (CBP) as the "CBC," an abbreviation for the Congressional Black Caucus, a group that has been critical of his presidency during an event paying tribute to federal immigration officials on Monday.

The president honored employees of Immigration and Customs Enforcement and Customs and Border Protection, bringing agents to the podium to note their achievements in addressing unlawful border crossings and stemming the flow of illicit drugs.

The president had another awkward moment when he congratulated the work of Hispanic border agent Adrian Anzaldua on a smuggling bust in Laredo, Texas after inviting him to make some impromptu remarks. Trump said, "You're not nervous — speaks perfect English."

The report said Trump's aides have to explain the concept of time zone differences on "a constant basis," as the president called other world leaders when it's the middle of the night in that leader's country.

After being surprised to see Nepal and Bhutan on the map and asking the aides, "What is this stuff in between and these other countries?" the president laughingly pronounced the countries names as "nipple" and "button."

Trump referred to African nations as "shithole countries" in January while talking about immigration during a meeting in Washington.

Speaking at a rally in Michigan in 2016 Trump said "You're living in your poverty, your schools are no good, you have no jobs, 58 percent of your youth is unemployed — what the hell do you have to lose?" when asking African Americans to vote for him.