Trump says Google full of bad, fake news about him, warns tech giants to be 'careful' 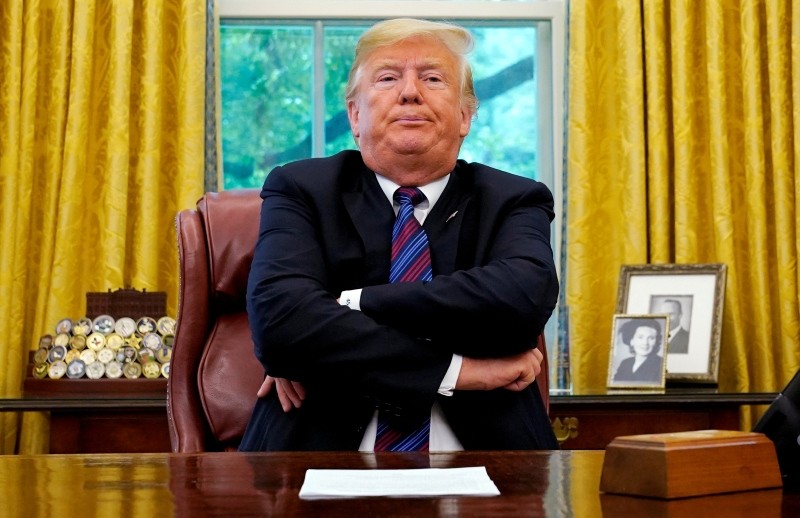 U.S. President Donald Trump sits behind his desk as he announces a bilateral trade agreement with Mexico to replace the NAFTA at the White House in Washington, U.S., August 27, 2018. (Reuters Photo)
by Compiled from Wire Services Aug 28, 2018 12:00 am

U.S. President Donald Trump claimed Tuesday that Google results were "rigged" because searches for "Trump News" brought up negative stories about him, and questioned whether this was illegal.

The president has attacked U.S. social media giants in the past days for allegedly censoring conservative voices, an unfounded claim widely believed by his followers.

"Google search results for 'Trump News' shows only the viewing/reporting of Fake New Media," the president tweeted on Tuesday.

"In other words, they have it RIGGED, for me & others, so that almost all stories & news is BAD. Fake CNN is prominent. Republican/Conservative & Fair Media is shut out. Illegal?"

According to Trump, "96% of results on 'Trump News' are from National Left-Wing Media," which he describes as "very dangerous."

"Google & others are suppressing voices of Conservatives and hiding information and news that is good. They are controlling what we can & cannot see. This is a very serious situation-will be addressed!"

Hours after attacking Google, Trump stepped up his criticism of other internet firms as well, calling "bias" against him and his supporters.

"Google and Twitter and Facebook -- they are really treading on very, very troubled territory and they have to be careful," Trump told reporters at the White House.

The comments come after the president last week slammed social media firms for what he claimed was suppression of conservative voices, and Tuesday's tirade against Google that claimed news search results were "rigged" to favor "left-wing media."

However various studies suggest conservatives are thriving on social media. Twitter and Facebook have both denied bias in policing their platforms.

In response to Trump's accusations, Google said its goal is to make sure users of its search engine get the most relevant answers quickly.

"Search is not used to set a political agenda and we don't bias our results toward any political ideology," the Mountain View, California-based company said. "Every year, we issue hundreds of improvements to our algorithms to ensure they surface high-quality content in response to users' queries."

"When users type queries into the Google Search bar, our goal is to make sure they receive the most relevant answers in a matter of seconds," Google said in a statement. "Search is not used to set a political agenda and we don't bias our results toward any political ideology."

Apple, YouTube and Spotify have permanently removed some of Jones' content, Facebook has suspended him for 30 days and removed some of his pages, while Twitter gave Jones a weeklong timeout and was mulling deeper changes to try to limit the spread of fake news, misinformation and hate speech.

Trump has not named Jones in any tweets on the issue. He once praised Jones' "amazing" reputation.