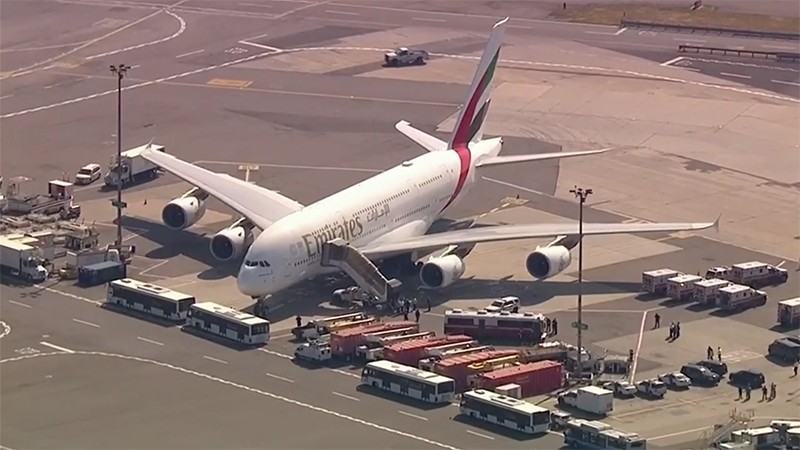 An Emirates Airbus A380 airplane quarantined at John F. Kennedy airport with several ambulances on standby, Sept. 5, 2018. (AP Photo)
by Sep 05, 2018 12:00 am
An Emirates airline flight from Dubai was quarantined at New York's John F. Kennedy International Airport on Wednesday morning after passengers became ill during the flight, the airline and New York news media said.

Emirates flight 203, a double-deck Airbus A388 carrying about 500 passengers, landed shortly after 9 a.m. EDT (1300 GMT), according to an airlines spokeswoman.

The spokeswoman said 10 passengers fell ill on the flight from Dubai to New York. New York media outlets had earlier put the number at about 100 passengers.

"Emirates can confirm that about 10 passengers on board flight EK203 from Dubai to New York were taken ill," the spokeswoman said. "On arrival at JFK, as a precaution, they were immediately checked by local health authorities and those needing medical attention will be attended to." She said all other passengers would be allowed to leave the plane shortly.

Larry Cohen, who identified himself as one of the passengers aboard the plane, uploaded photos on Twitter showing dozens of police and emergency vehicles waiting outside the plane on the tarmac.

"All we have been told is that there are some sick passengers and that we need to remain on board," Cohen told Reuters via Twitter messaging.