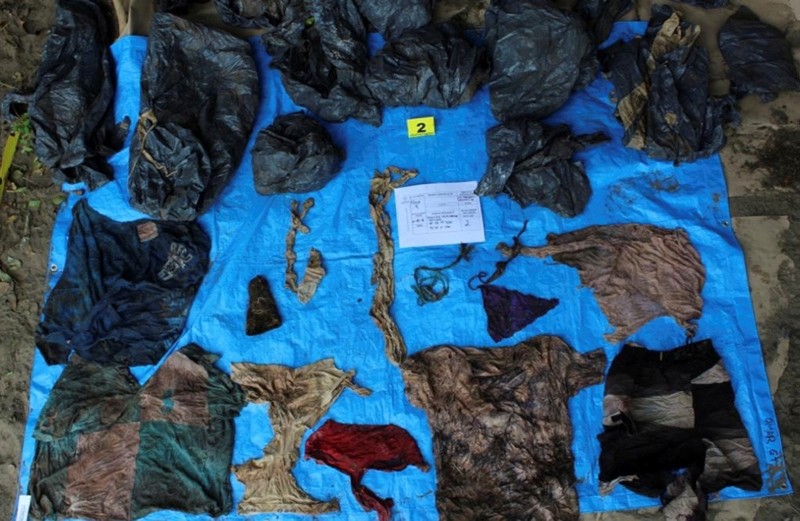 In this undated photo provided by the Veracruz State Prosecutor's Office shows clothing items found at the site of a clandestine burial pit in the Gulf coast state of Veracruz, Mexico. (AP Photo)
by Sep 07, 2018 12:00 am

The bodies of at least 166 people have been found in the Mexican state of Veracruz, prosecutors said on Thursday, the latest in a string of grim discoveries made in the eastern region in recent years.

State attorney general Jorge Winckler told a news conference investigators discovered the bodies in 32 graves in the central part of the state after an Aug. 8 tip from an unidentified person that they had been dumped there.

"After 30 days of work, the human remains of at least 166 people have been found, that is the minimum number of individuals identified on the basis of skulls that have been discovered in 32 different parts of the search area," the state attorney general's office said in a statement.

Veracruz has long been racked by violent crime and is an important trafficking route for drug gangs moving narcotics north towards the U.S. border.

Duarte is in jail awaiting trial on allegations of involvement with organized crime and siphoning off millions of dollars during his tenure. He denies any wrongdoing.

Winckler did not reveal the precise location of the graves, citing the safety of personnel still working at the site.

"Aside from human remains, we have found more than 200 items of clothing, 114 pieces of identification, as well as different accessories and personal items," he said.

Analysis of the remains indicated the bodies had probably been there for at least two years, he said.

Winckler called on residents whose family members have disappeared to come forward to have DNA tests performed in the hope shedding light on the identity of the remains.

In March 2017, Winckler announced the discovery of more than 250 skulls in unmarked graves in the state.

There were more than 30,000 murders across Mexico last year, the highest in records going back to 1997, as rival drug gangs splintered into smaller, more blood-thirsty groups following more than a decade of a military-led campaign to battle the cartels.