Major hotels across US to give panic buttons to staff to fight sexual harassment, crime 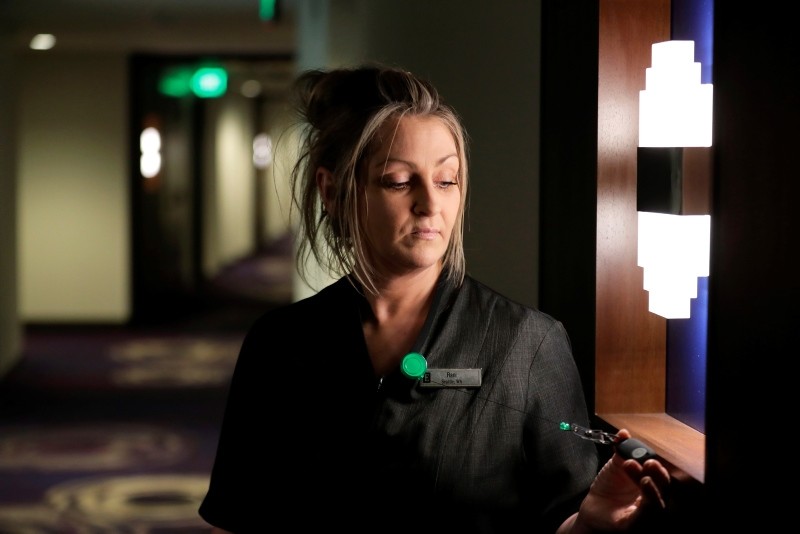 In this Wednesday, Sept. 5, 2018, photo Rani Accettola, a housekeeper at the Embassy Suites by Hilton hotel in Seattle's Pioneer Square neighborhood, poses for a photo in Seattle. (AP Photo)
by Sep 07, 2018 12:00 am

Major hotel chains including Marriott International Inc and Hilton Worldwide Holdings Inc said on Thursday they are arming U.S. employees with panic buttons to fight sexual harassment and crime, an about-face for an industry that has opposed the idea for years.

Workers in the hotel industry are frequent targets of sexual harassment as they are often alone with guests in their rooms. Unions and other advocates have increased pressure on hotels to provide the devices over the last year in the wake of the #MeToo social media movement and the Oct. 1 Las Vegas shooting, where the gunman opened fire from his hotel window.

"Protecting our employees and the millions of guests who stay in our hotels each day is of paramount importance to the industry," Katherine Lugar, president and chief executive of the American Hotel and Lodging Association, told reporters at an industry event in Washington.

Executives at Marriott and Hilton pledged to roll out the devices to employees across all of their U.S. hotels by 2020.

Executives from InterContinental Hotels Group Plc, and Wyndham Hotels & Resorts Inc said they are working on plans to roll out the devices to their owned and managed hotels over the next two years, and are working on guidelines for franchise owners. Hyatt Hotels Corp said it has the devices at 120 Hyatt hotels in North and South America and plans to make them standard across all managed and franchised hotels.

Brands for those five companies comprise 45 percent of all hotel rooms in the United States, according to STR Inc, which tracks the hotel industry.

The hotel and restaurant industry accounted for more than 14 percent of sexual harassment complaints filed with the U.S. Equal Employment Opportunity Commission between 2005 and 2015, the highest of any industry, according to an analysis last year by the left-leaning Center for American Progress.

Earlier this year, a group of female Marriott workers demanded at the company's annual meeting better protection from sexual harassment, including panic buttons.

D. Taylor, president of hospitality workers' union Unite Here, which has spearheaded many of the efforts on panic buttons, praised what he called "a long overdue first step" by the hotel industry.

He added that he hopes the industry will invest in the proper technology to ensure workers' safety.

"You have to invest not just in words, but in capital, to make sure your workforce is safe," Taylor said.

Hospitality workers' unions have succeeded in requiring the devices in a handful of U.S. cities in recent years, including Washington, D.C., Seattle, Chicago, Las Vegas and Miami Beach, Florida.

Unionized hotel workers in New York City have had similar devices since 2012, in the wake of a hotel housekeeper's charge that she was sexually assaulted by former IMF chief Dominique Strauss-Kahn in a New York hotel in 2011.

Dallamy Santos has worked for nearly two decades as a housekeeper and porter at a Las Vegas casino resort.

A few years ago she was cleaning a male guest's room when he offered her money for sex, she said. On another occasion a male guest left a pornographic film on the TV and made her feel uncomfortable. In both cases she said she ran out of the room, not knowing what else to do.

"In those moments you don't feel safe; you don't see that person any more as a guest," Santos said. "You don't want to have to worry about where you're going to get the help."

Marriott's Chief Executive Arne Sorenson at Thursday's event held up a device that resembled a thin black box with a red button. He said it usually includes a GPS system to signal security or hotel management. Others at the event said there were options for the devices to sound a loud noise.

A 2016 survey of nearly 500 Chicago-area female hospitality workers found that 58 percent in the hotel industry and 77 percent in the casino industry had experienced sexual harassment by guests, according to the study by industry union Unite Here. Common complaints included guests exposing themselves to housekeepers or cornering them in the room.