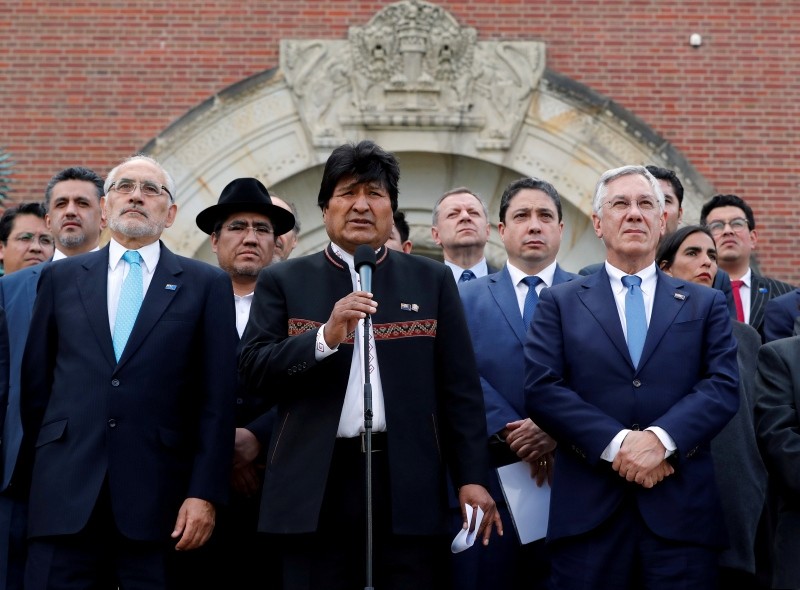 Bolivian President Evo Morales speaks outside the ICJ, the U.N.'s highest court for disputes between states, after the ruling on a dispute between Bolivia and Chile on access to the Pacific Ocean, in The Hague, October 1, 2018. (Reuters Photo)
by Compiled from Wire Services
Oct 01, 2018 12:00 am

Landlocked Bolivia cannot force Chile to negotiate over granting it "sovereign access" to the Pacific Ocean, judges at the International Court of Justice (ICJ) ruled on Monday in a setback to Bolivian President Evo Morales.

Bolivia surrendered most of its former coastline to Chile in a 1904 treaty following the War of the Pacific between 1879 and 1883. The Andean neighbors have held occasional talks about a possible corridor to the sea for Bolivia ever since but judges said that did not create any obligation for Chile to actually negotiate one.

Reading the panel's 12-3 decision, Presiding Judge Abdulqawi Yusuf said that despite the countries' long history of talks, Chile had never bound itself to negotiations that would lead to a surrender of territory, as Bolivia had argued.

Accordingly "the court is unable to conclude ... that Chile has the obligation to negotiate with Bolivia in order to reach an agreement granting Bolivia full sovereign access to the Pacific Ocean."

Bolivia's leftist President Evo Morales -- who is trying to win political capital at home through the issue as he seeks a fourth term in office -- attended the court session in the Peace Palace in The Hague, where the court is based. While the hearing was broadcast live throughout Bolivia, he listened attentively during the ruling, taking notes as judges rejected all eight grounds advanced by Bolivian lawyers to support their claim.

Following the hearing, Morales told reporters that would never renounce a claim for access to the Pacific Ocean.

Chile currently allows Bolivia duty-free access to the port of Arica, near its northern border with Peru. Bolivia aspires to have a corridor including train line and port under its own control, and Morales in 2012 halted discussions he saw as fruitless in favor of seeking a legal ruling to bolster the strength of Bolivia's case.

Judges noted their ruling, while siding with Chile, was not intended to stop the countries from re-entering negotiations "in the spirit of good neighborliness."

Yusuf encouraged them to resolve "issues arising from the 'land-lockedness' of Bolivia, the solution of which, they have both recognized to be a matter of mutual interest."

At hearings in March, former Bolivian President Eduardo Rodriguez Veltze told judges: "Restoring Bolivia's sovereign access to the sea would make a small difference to Chile, but it would transform the destiny of Bolivia."

The ruling was broadcast on giant screens at public squares in the Bolivian capital, La Paz, and in an indication of the significance of the decision for both counties, Catholic bishops in Bolivia and Chile on Sunday called on their congregations to accept the court's ruling "with faith, peace and good sense."

In Bolivia, groups linked to the government held public vigils to wait for the reading. As part of the preparations Sunday, a group of spiritual guides called yatiris from the Aymara ethnic group made an offering to the Pachamama, or earth mother, on Sunday in a plaza in La Paz for a ruling favorable to the Bolivians.

A small crowd of Bolivian protesters waving flags and playing traditional pan pipes also gathered outside the Peace Palace ahead of the verdict.

Chile and Bolivia have had no diplomatic relations since 1978 when Bolivia's last attempt to negotiate a passage to the Pacific broke down in acrimony.

Geoff Gordon, an analyst at the Hague-based Asser Institute, said there were "high stakes for Bolivia and Chile".

The War of the Pacific pitted Bolivia and Peru on one side against Chile on the other, and saw battles fought in the Pacific Ocean, the Andes Mountains and even in the Atacama Desert, the driest desert in the world.

Decades of post-independence border tensions in South America were finally ignited by a dispute over Bolivian attempts to tax a Chilean company mining saltpetre, a mineral used in fertilizer that was at the time replacing the traditional use of guano, the excrement of seabirds and bats.

Bolivia says regaining the 400 kilometers (260 miles) of coastline along the northern tip of Chile that it lost in the war would stimulate growth and development in South America's poorest country.

Morales has also weaponized the dispute to boost his popularity at home where the importance of the issue is underscored by the fact that Bolivia still has a navy despite lack of access to the sea.

Bolivia's lawyers have argued that it has tried several times over the last century to discuss possible access to the Pacific, but to no avail.

Bolivian activists said the loss of the Chuquicamata mine, the world's largest open-pit copper mine which is situated in the disputed area, has also badly hit the country's indigenous peoples.

These attempts were continuously slapped down by the Chileans, La Paz's lawyers said, leading to the breakdown in diplomatic relations.

Santiago, in turn, said the border is based on a 1904 peace treaty signed with Bolivia in the wake of the War of the Pacific and therefore must be respected.

Chilean Foreign Minister Roberto Ampuero said last week his country will not negotiate with Bolivia over the issue as "our sovereign territory is protected and will not be a part in anyone's negotiations".

But President Sebastian Pinera has not ruled out an "intermediate solution."

Meanwhile, Chile has opened its own case against Bolivia over the Silala waterway, which flows into the Atacama Desert and which La Paz has threatened to divert.

The ICJ, also known as the World Court, was set up after World War II to rule in disputes between United Nations member states. The court's findings are binding and cannot be appealed, although it has no real power to enforce them.