US envoy to UN Nikki Haley resigns from post 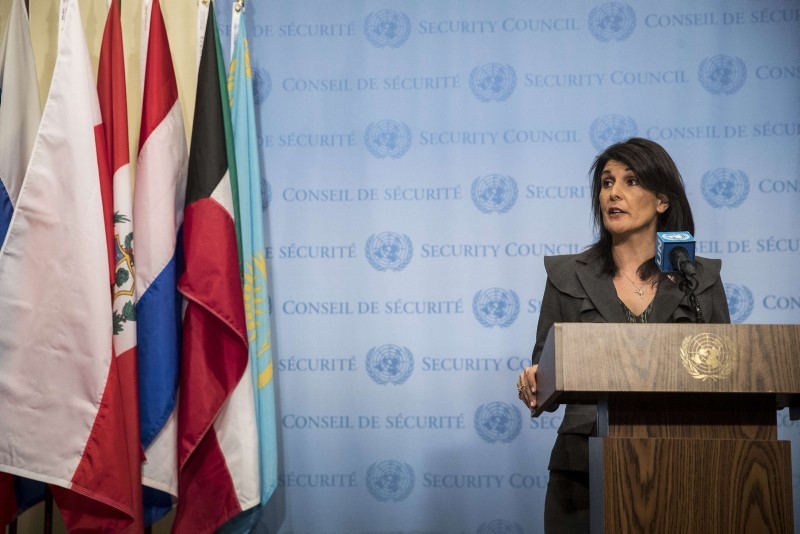 Nikki Haley resigned Tuesday as the U.S. ambassador to the United Nations, in the latest departure from President Donald Trump's national security team.

Meeting Haley in the Oval Office, Trump said that Haley had done a "fantastic job" and would leave at the end of the year.

"She told me probably six months ago," Trump told reporters, '"I want to take a little time off.'"

Haley stayed coy on her reasons for quitting, saying only that it was "important to understand when it's time to stand aside."

But she insisted that she was not planning to run for president herself against Trump in 2020, when she would likely be seen as a moderate Republican alternative.

Haley was appointed to the U.N. post in November 2016 and last month coordinated Trump's second trip to the United Nations, including his first time chairing the U.N. Security Council.

Before she was named by Trump to her U.N. post, Haley was governor of South Carolina, the first woman to hold the post. She was re-elected in 2014.

Last month Haley wrote an op-ed in The Washington Post discussing her policy disagreements but also her pride in working for Trump. It came in response to an anonymous essay in The New York Times by a senior administration official that alleged there to be a secret "resistance" effort from the right in Trump's administration and that there were internal discussions of invoking the 25th amendment to remove Trump from office.

"I proudly serve in this administration, and I enthusiastically support most of its decisions and the direction it is taking the country," Haley wrote. "But I don't agree with the president on everything."

Haley received scathing criticism around the world in May after defending Israel's military offensive near the Gaza border that killed at least 62 Palestinians.

Haley praised Israel for showing "restraint" against Palestinians and Hamas who "has been inciting violence for years, long before the United States decided to move our embassy" to Jerusalem.

Addressing a U.N. Security Council meeting on deadly violence in Gaza, Haley said: "No country in this chamber would act with more restraint than Israel has."

Haley once again came under fire in September as a New York Times report revealed that the U.S. State Department spent $52,701 last year on customized and motorized curtains for Haley's official residence in Manhattan.

Many people took to social media to express their shock and anger about the expensive revelation as the purchase was made while the department was undergoing steep budget cuts and had frozen hiring.